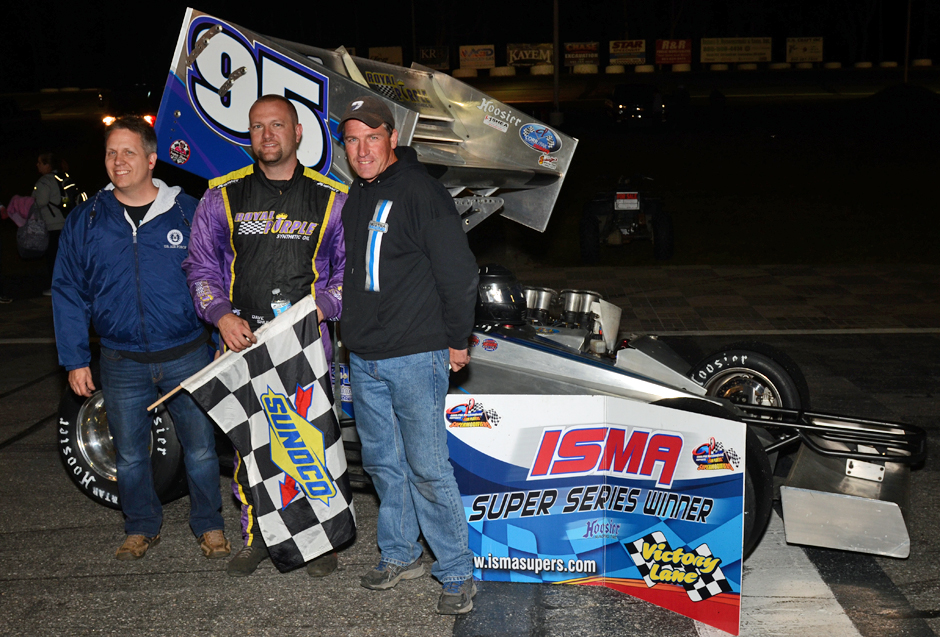 Epping, NH – Ohio’s Dave Shullick Jr. continued on his impressive win streak on Saturday at Star Speedway when he took home his second career Classic win at the Epping bullring. Shullick had set out at the beginning of the race season with several goals in mind. To race some ISMA, to win the Oswego Speedway track championship and perhaps redeeming last year’s heartbreaking loss of the International Classic 200 with a lap to go by winning this year. After checking off the aforementioned on the list as accomplished, Shullick was back in his winged 95 to tackle Star Speedway’s 52nd running of their prestigious Classic.

Starting tenth in the field of 19, Shullick watched as first Michael Muldoon and then Jon McKennedy led the event, leaving a trail of lap cars between the front duo and some strong challengers behind. On lap 48, McKennedy, took over up front and appeared to be in command there. But, just past halfway, the blue 95 appeared to be calculating his movement forward and soon sat in second. Shullick then stalked McKennedy until a lap car barricade allowed him to slide by for the lead and eventually the win.

Dave described his race afterwards, “You know where I started I had to be smart especially at the beginning. I just wanted to ride and get a few spots here and there. I had a pretty good car for sure. It was a little tight for me, but still pretty good overall. I got up to second there and raced with the 21. He’s a tough guy to pass here. He knows the track well and runs really fast here. Traffic was pretty awesome. I think we had the best car at the end. We saw tire left and just ran away. Thanks to the crew and my sponsors for their support.”

McKennedy, who moved into the ISMA championship point lead after the Oswego Super Nationals, was a little disappointed with second after his strong run up front.

“This was a great effort on everyone’s end. We had a good car. It was just in those last 20 or 30 laps it started getting a little loose. I just did the best I could. It was disappointing that I led over half the race and kind of got stuck there behind some lap cars. DJ was able to get by. I think he had a better car than me at the end. When we got in a clean track again, he was still able to pull away. At one time he had over a straightaway on me. The guys worked really hard. It’s tough to lead a lot of the race and finish second though. Congratulations to DJ and on to Thompson.”

Timmy Jedrzejek, who is locked in the point battle with McKennedy, came from seventh to keep close to the 21.

“It was definitely a good night. I don’t typically do well here. Third place is like a moral victory for my ride home tomorrow. We came here with a plan and we didn’t have any hiccups. They prepared the car top notch and hats off to the whole Howie Lane crew, Dr. Mom Says School is Cool, Harrington Trucking, Essex Seafood, Enerco – Mr. Heater, Reader Electric and all the people who help with this deal. It was a pleasure to drive tonight and that was an exciting race to drive. I hope the fans certainly got their money’s worth tonight. We started seventh and picked and chose our spots, I guess you can say wisely. We didn’t do any damage to the car and got up to third. We’ll take that third. Congrats to DJ and Jonathan for their first and second place runs. It’s going to come down to Thompson. We still have a shot at this championship. Jon’s got a little bit of a lead on us but it’s coming down to the last race and what else can you ask for?”

Jedrzejek went on to comment on his teammate for the night, Russ Wood, who took the Lane Racing 9 to a sixth place in an amazing run from the rear. “And how about Russ jumping into the black 9 car and with no time on the track all weekend or having been in a super for three years, starting in the back and wheeling that hot rod up to sixth place? That is amazing and impressive. Hats off to Russ and the crew for preparing that car at the last moment for him to drive it. I’m really excited about their finish.”

Michael Muldoon and Dan Bowes led the way to green in the 150-lapper with Muldoon quickly grabbing the lead with Chris Perley and McKennedy both coming by Bowes to keep Muldoon in sight.

Bowes, Mike McVetta and Trent Stephens were next in line as the long race began.

The first slowdown came on lap 22 for a spin by Joe Gosek, bunching the competitive group on Muldoon’s back end on the restart. But the 15 was able to hold the point and begin to pull away from Perley, McKennedy, Bowes, McVetta, Jedrzejek, Trent Stephens, Shullick, Mark Sammut, Dave Danzer and Jeff Abold as the race settled into a lengthy green stretch with Muldoon leading the pack through the slower cars.

McKennedy moved by Perley as the race approached the lap 50 mark and moved in on Muldoon. On lap 48 McKennedy took command as Muldoon slowed for a lap car and now it was McKennedy the determined frontrunner as he almost instantly put two cars down a lap for a comfortable cushion. Perley got by Muldoon for second on lap 55 but had that lap car cushion to overcome to get close to McKennedy. Moving up on Perley and Muldoon were Bowes, McVetta and Jedrzejek in some close racing action… a little too close actually.

On lap 61 McVetta was punted off turn 2 and the yellow flew. The 22 was able to restart at the tail.

Lap 75 was worth an extra $1000 to the leader courtesy of EF Shea Concrete and McKennedy headed for the check after restart of lap 61 and picked it up easily. The running order behind him was Perley, Bowes, Jedrzejek, Shullick, Abold and Muldoon with a couple lap cars interspersed between.

Yellow flew again on lap 88 when Dave Danzer’s 52 spun around in turn 3. He was able to restart but the flag now put Shullick on McKennedy’s tail after passing Perley just prior to the flag. Perley, Jedrzejek and Abold were playing cat and mouse behind the lead duo as the laps clicked away.

Just prior to lap 100, yellow and then red flew for the 19 of Trent Stephens who had broken a heim joint in the left rear, dropping the right side of the car down and hard into the wall between turns three and four. Stephens was transported to the hospital for x-rays and while the cars were stopped waiting a refueling ensued.

A quick yellow for Dave Duggan’s 51 on lap 104 again brought the key players in the race together when the restart came. The race to the finish was on and it was one to watch.

Heading into the last 45 laps it was McKennedy out front with Shullick tacked to his back end. Timmy J and Jeff Abold battled for third with Jedrzejek taking the spot but not loosing Abold by any means. Bowes, Wood, Otto Sitterly, Muldoon, McVetta, Moe Lilje, Sammut and Perley, who had pitted to adjust stagger during the Stephens accident, were still racing full bore to better their positions.

At the 120 mark McKennedy was still holding Shullick back as Timmy J, had a lap car between his 97 and Abold, Bowes and Wood.

On lap 122 Shullick saw his chance to make the move as the duo approached more lap traffic which, on the speedy oval, was not that easy to get by. One lap later, as McKennedy slowed to get around a lap car, Shullick dove by McKennedy much as Jon had done to Muldoon to take the lead earlier in the race.

Once out front, Shoe II began to pull away with confidence leaving McKennedy and Jedrzejek to battle for second and valuable points. Bowes, Abold and Wood were still together vying for top five spots as the laps wore down with Wood just one spot out of the top five.

As the checkers flew for Shullick on lap 150, he was alone out front of McKennedy and Jedrzejek while Abold was fourth after getting by Bowes a few laps earlier with now Bowes fifth. The amazing run by Russ Wood netted him a great sixth, with Perley, Sitterly, Muldoon, the last cars in the lead lap, ahead of Danzer who was tenth, one down.

The popular Wood, earned the Hard Charger award and brought a huge round of applause for his efforts. Russ, surrounded by fans back in the pits, replayed his day which had only started with lining up for the feature.

“This was all kind of sudden. Howie called me to see if I wanted to run the extra car. They wanted to have a good car count for the Classic. It’s a pretty historical race. I just happened to feel like doing it today so I said I’d come. I had to find my stuff. I got here and had to borrow some underwear from Trent Stephens. I borrowed some gloves from someone else. We had to miss time trials and the warmups. But I had been in the car before and I know the track pretty good. I figured we’d just start last in the feature and have some fun with no pressure. And, I had fun! I was passing some cars and the car ended up in one piece. So I had a good night. It felt good to back in it.”

Would he like to do it again? “Maybe if the race was close to home and I wasn’t too busy,” Russ laughed.

Jeff Abold, whose car from 2016 that had been sold and redone, had won the 350 Supermodified 50 lapper, was now on a learning curve with his new car. “It was a good night. It was the first time at Star with this car. We learned a lot here during the day and there’s more to learn with it. I’m pretty happy to work up to third from where we started. Now we have the baseline for when we come back the next time and hopefully have another good run. “

Dan Bowes, who also experimented with some changes to his car, said, “I was loose from lap one. We tried something new for the setup here and it seemed to be working all right last night in practice and even during the day it wasn’t so bad. For whatever reason in qualifying we were getting loose. Then from lap one in the race I was loose. We were just trying to peddle it the whole way. After that last red it actually got a lot better for only about ten laps. And then it went like a light switch turned back on and I was just hanging on. To salvage a fifth is pretty neat. I thought we were going right back to where it was. It was kind of a tough night but still we salvaged a halfway decent finish. I was a little frustrated with it. I thought we had a better car but we just missed a few things. It’s in one piece and it’s on to Thompson. Back to the drawing board for that one.”