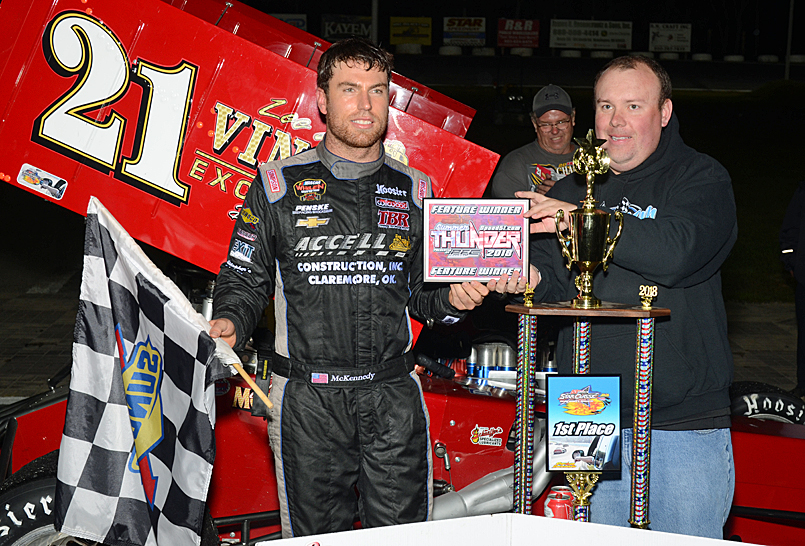 Epping, NH – The 53rd running of the traditional Star Classic was a poignant one for the ISMA supermodified drivers who had come to run and possibly win, the race named for the man who helped build and develop the class he so loved. Many of them had grown up at this speedway and had been helped along the way with their racing careers.

Bob Webber Sr., after fighting a vicious illness for a long time, passed away in January of 2018 and his family immediately named the race he founded and continued for many years at the New Hampshire oval, in his honor – the Bob Webber Sr. Memorial Classic.

It was therefore fitting that the winner of the 53rd running of the Classic Saturday night, Jon McKennedy of Chelmsford, Mass., should be a driver who has been assisted along the way to his success by the race founder. Taking over the Classic lead on lap 46, McKennedy went on to dominate the remainder of the 150 lap event. Jon indicated later that he felt he had some help winning his second-career Classic.

“This was awesome,” said Jon. “Everyone on the crew worked hard. And a big thanks to Pam and Lee Vinal, the car owners. They gave me a great car. It’s a big win. Anytime you can win a Star Classic it’s great. Big Bob was definitely riding with us tonight. Big Bob let me race here at a young age. He took me under his wing and was always awesome to me. I was very sad when he passed earlier this year. It’s just great to win here tonight. He was riding with me and it made an awesome race.”

While first place was definitely McKennedy’s to lose, the racing for top spots behind was well-contested with Ben Seitz picking up second in the Soule 32. Said Ben after his run, “The car was great. The crew worked hard all weekend. They keep getting this new car better and better. So I need to thank the crew. They have been working their tails off. And I have to thank the sponsors, Sam Lorusso, Cape Cod Aggregates, Ken’s Collision, Dave’s Body Shop and SAVES. Jon was just a lot better than we were in traffic. He was just a touch quicker but he could really maneuver through the traffic so much better than we could. That’s where he really beat us up. We were just a tick slower. Now we know the tendencies with this car we have to work on. So we’re going to keep getting better. Then we’ll head on to Thompson and try to get one there.”

Seitz was chased by a not unfamiliar face on or near the Star Classic podium, Jeff Abold. Jeff, who is not a regular winged supermodified runner, seems to excel at the Epping oval. Therefore he was pleased with another competitive finish. “Another good run for us and a podium finish. We have had a consecutive streak of top fives here. I think it’s up to six years now so we’re right on the edge. We just need an extra spot or two one of these years. That would be nice. We are able to make gains every time coming here, Basically we run one race with the wing on the car and being able to compete with these guys is an accomplishment. ISMA is so hard to run well with coming out only one time a year. I’m really proud of our effort. It’s hard to ask for much more than that. We’re happy with this finish, but we’ll keep on looking for that win sometime here. This is it for us this season. It’s a much needed off season right now.”

As a tribute to Webber Sr., the Classic race was paced by Bob’s iconic black truck which was commonly parked on pit road where he held court and watched the racing. Leading the way at the drop of the flag for the first annual Bob Webber Sr. Memorial 150 were the 52 of Dave Danzer of Oswego, NY and the 10 of Michael Muldoon from Baldwinsville, NY. Muldoon jumped out to the early lead, holding it through several yellows, with one early casualty being 7-time Classic winner Russ Wood, who was driving the Lane 97 and was looking forward to doing well for his old friend. A broken rocker arm or push rod was deemed the cause that ended the popular Wood’s race before it really started.

Muldoon continued out front with Seitz and McKennedy his nearest challengers in the early going. A lap 28 yellow slowed the race when the 27 of Jamie Timmons hit hard coming off turn four and ending near turn one with a lot of damage to the car’s front.

Back underway, with the field bunched, Muldoon had Seitz, McKennedy, Danzer, Abold, Kyle Edwards, Chris Perley and Mike McVetta, among others hot on his tail.

McKennedy was able to get by Seitz soon thereafter and spend the next fifteen laps trying to catch up to Muldoon. A lap 43 yellow for Trent Stephens’ 19 which was over the bank between one and two. Mike Ordway Jr. pitted here during the clearing of the car.

The race restarted with Muldoon, McKennedy, Seitz, Abold and Chris Perley in the top five. McKennedy made his move by Muldoon several laps later on lap 46 and would lead the rest of the way to the finish at lap 150.

McKennedy began putting cars down a lap as he romped through the field, picking up the E. F. Shea Concrete Products $1000 Halfway bonus on lap 75. Seitz took over second here with Muldoon, and Abold right behind and in front of a Perley-McVetta battle for fifth.

The race was nonstop as McKennedy was the class of the field out front. At the lap 100 mark, Jon had at least a half track advantage over Seitz, Abold, Perley and McVetta, and there was no slowing him down until a yellow on lap 113 provided a break when Mike Lichty, in a fight for fifth with Mike McVetta, found his 84 spinning in turn 4.

As the race restarted, McKennedy had a few lap cars in place between second place runner Seitz, Abold, and Perley with several lap cars laced between and the next pack of runners. But the restart didn’t last long as another yellow came for Perley whose 11 had brushed with another car sending him out of the action on lap 114.

On lap 115, it was McKennedy taking off from Seitz and Abold who were putting on a show for second, then Mark Sammut, Lichty, McVetta and another group of lap cars.

At lap 125, McKennedy had Seitz and Abold in clean air behind as Sammut, Lichty and McVetta followed.

The next 25 laps saw McKennedy untouchable as he cruised out front, leaving the next four running in the top five, far behind.

Jon and his co-pilot, crossed under the double checkers all alone with Seitz and Abold still racing hard for second. Sammut and Lichty finished up the top five.

Sammut was content with fourth as he indicted after the race. “The car was reasonable, not as good as it needs to be but we had a pretty good run coming from thirteenth up to fourth. As always the lap cars were super tough. I don’t know why they have to give the leaders such a hard time. But, it wasn’t just me, it was everybody. So it’s just one of those things. The car was good. Fourth was about as good as we were going to get. Jonathan was just dominant and was able to cut through the traffic.”

Lichty, too, after some problems earlier in the day, accepted a fifth. “We had a good car all day. We would have been better come feature time but we had an incident with a push truck early on in our first warm up. It climbed over the back bumper and destroyed the fuel cell. After that we had motor problems. The car was cutting in and out and I wasn’t smart enough to recognize that it actually pinched the fuel pickup once that happened. So that was some of our problem in the feature and then we just got blatantly taken out probably with about 50 laps to go. Nobody was going to catch Jonathan. But between say second and eighth there were groups of cars passing throughout the lap cars. And, they were running a fairly decent speed, so it made it interesting because they were hard to pass. So we salvaged a fifth. I would have liked to be a lot better but I’m just happy that there was good racing throughout and we’ll move on to the finale at Thompson. I just have to thank everybody on the crew. Reed’s Salvage, PATCO Transportation, Level Performance, everybody with ISMA – Corr/Pak, Hoosier, and especially Bob Webber Jr. for holding this race as tribute to his dad.”