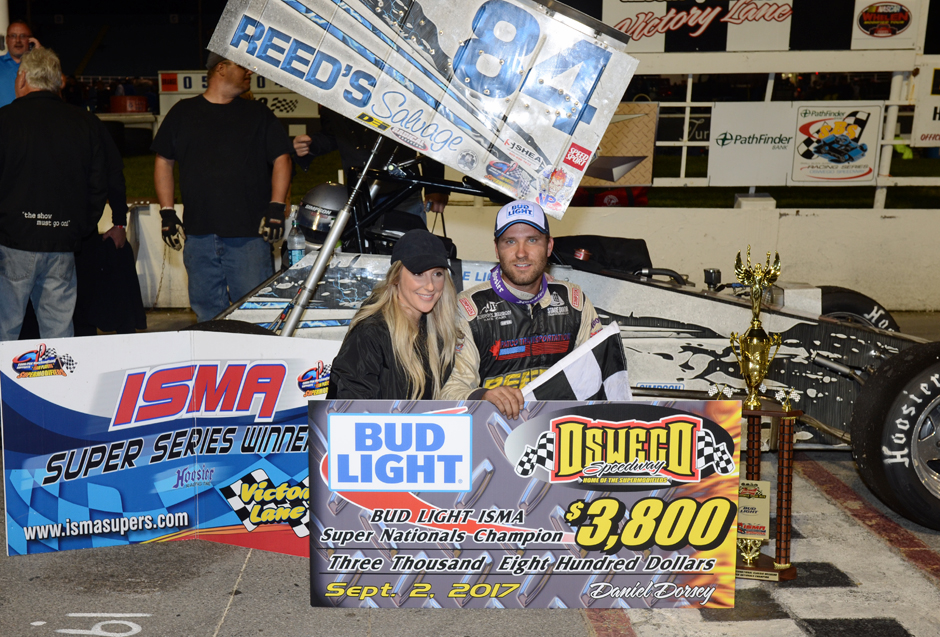 Oswego, NY – Two of the winningest drivers in Oswego Speedway winged racing, Mike Lichty and Chris Perley, put on the proverbial classic battle for the 24th annual Super Nationals win on Saturday night. By virtue of qualifying and handicapping, Perley and Lichty sat on the front row and it was Lichty who won the war for the lead as the pair went side by side on the green flag lap. It was Lichty’s sixth Oswego winged win and the second in the ISMA Super Nationals.

The Canadian driver was elated with the win, but still voiced his concerns about the race.

“It was a good night obviously for all of us. Every time we come to Oswego we know we have a shot at winning. And we knew we had a shot starting from the front row. I knew if Perley got the lead from the start, that’s probably the way it was going to stay or if we got him on the start chances are we would have stayed there for the rest of the race. I have to thank everybody on the crew. They worked really hard today, everybody did. We were quick time in practice, but the car just wasn’t in the race track and qualifying was okay, but so so. And after the heat race we spent all the time during the modified race over at the scales working on the car. I have to thank Corr/Pak, Shea Concrete, Reed’s Salvage, my father wth Patco – everybody who helps out.

“And I’m not bashing Hoosier at all. They make a fantastic tire. I wouldn’t want to be on anything other than Hoosiers, but ISMA as a group has to come up with a decision to bring back a better tire to bring more cars and racing back to the fans. This is it for me for the season. I’d say there is an issue that needs to be addressed by our organization.

Perley, who was able to challenge Lichty on more than one occasion, was pleased with the run in his old Miller 11, but he also voiced some concern.

“We did good. This old car ran so solid. It unloaded good and I was actually pleased to be in it. I’ve been in these cars for a long time and it was nice to jump in it and go fast. For what we’re running on and everything, I think our car performed quite well. We ended up losing stagger. It was definitely whoever got the best start. The race was between Mike and myself. I was nervous about Bowes and McKennedy as I didn’t know who was going to pressure. Then it looked like it was between me and Mike and Oswego was nice enough to put syrup down to try and make the track more racy, which it probably did but it gave the outside the advantage on the start. Once you were clear you are all right and Mike was able to keep it wound up. I gave him a run. I kept him honest. If we had more traffic it might have made it more interesting.

“I have to thank some people. I never lost ground through traffic as Jimmy D’s motor ran great. Ed Shea has been throwing tires at this thing left and right … without him we couldn’t do anything. I’d like to thank all my sponsors, Perley’s Marina, and even the old ones, Barrett Transportation, Jack Cook Enterprises, Hardy Transportation, and thanks to the fans for coming. You know we’re here to put a show on for the fans and it’s hard to do that lately. The drivers all want to do that in the worse way. We’re driving our guts out and we can’t do anything with it. It needs to change.”

Ohioan Trent Stephens who sat in fourth in the point race going into Oswego said, “We were really good all day. We unloaded and the car was awesome. I was really, really happy with it. I think we just tightened it up a little too much for the feature. I still ran good but I could have been a little bit faster. I guess I was still running close to what the leaders were on an open track. We were quick but it is tough to pass here to begin with. Then when you have five fast cars start up front, it’s hard to pass on top of that. We did pass and got some positions. So, we’ll take third and go on to Star and hopefully we’ll have some speed there and can challenge for the championship the last two races.

With Perley and Lichty on the front row, the fans were well aware that this was going to be an epic battle and it was. Running almost side by side for the first lap, Lichty was able to hit the line just ahead of Perley to take the advantage. The duo immediately began to pull away as Jon McKennedy, Dan Bowes, the fast time trialer, Trent Stephens, Mark Sammut, Mike McVetta and point leader Tim Jedrzejek chased.

By lap 13 the lead pair was up on the tail of the field and threaded by a lap car to carry on their tight race. The scene carried out again on lap 19.

The only yellow of the rapid 60-lapper came on circuit 20 when Dave McKnight’s continuing bad luck bit him again with the 70 requiring the flat bed to be removed from the track.

The race up front picked up where it left off with Perley trying Lichty on the restart to no avail. McKennedy, Stephens, Sammut, McVetta, Jedrzejek were carrying on a race of their own behind.

At the halfway mark, Perley appeared to be closing on the Lichty 84, but Mike was running his own race, knowing the winner of five SuperNationals in the past, was not to be ignored.

Traffic played into the drama as the duo encountered slower cars along the way but it didn’t deter. Stephens, who held a comfortable lead over McKennedy, from coming on strong in the late stages with Sammut, McVetta, Jedrzejek and Kyle Edwards continuing their race with the end was in sight.

At the checkers it was Lichty crossing first followed closely by Perley. Stephens, McKennedy, and Sammut completed the top five.

Jon McKennedy was a slightly distant fourth but was happy with the finish after bad luck had pursued him at the track over the years. “Overall it wasn’t bad. We started fourth and finished fourth. We ran third a lot of the race. But we maybe over-adjusted a little too much. At the end I got really tight. It was a good solid finish. Overall a top five here is a good deal for me. This is a track that has always sent a black cloud over me whenever I ran here so we’re pretty happy with a a top five. I look forward to Star next week. We always ran good there. I’m looking forward to the their Classic. I hope we get a good car count and put on a good show.”

Sammut was also pleased to finish fifth at the winged portion of Budweiser Classic weekend commented, “It was a pretty decent run. We weren’t going bad at all. It’s hard to believe actually, that lap cars drive the way they do. The leaders are lapping them for the third or fourth time and they won’t give an inch. That probably cost us one or two spots. Anyhow, the car was good. We were running really good. We just needed a few more laps to have a run at the 21 there. The car was good for the whole race and we can’t complain. A fifth place in the SuperNationals, we’ll take it.”

With only two races left on the ISMA schedule, there remains a competitive battle for the ISMA title among no less than six cars.