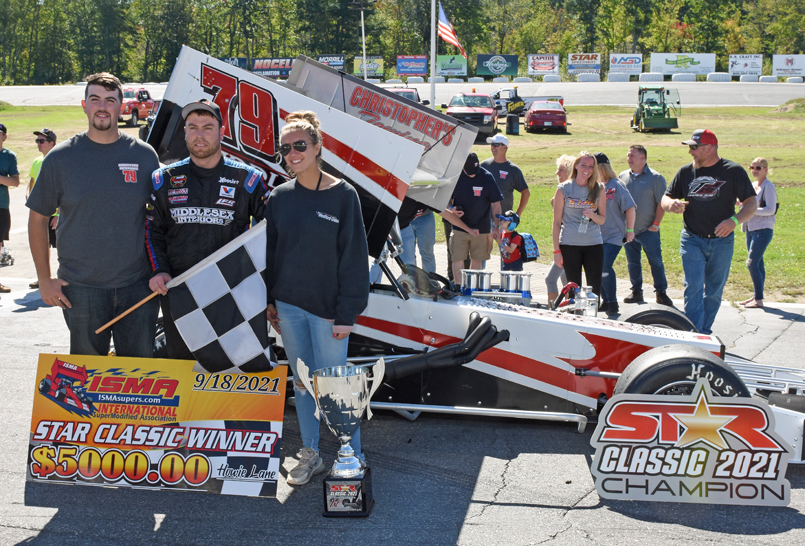 EPPING, N.H. – The 56th Annual Star Classic started on Saturday looking to be another great one as a good field of ISMA supermodifieds began filling the pits along with many other race cars. With the more than 20 cars ready to do battle only two things could mar the building excitement. One would be competitor attrition and the other weather.

Both managed to occur. Saturday afternoon, as time trials were held, the attrition began with two cars out of the action due to motor ills and one, the 25 of Dan Bowes, taking a hard hit into the tires on pit road, doing extensive damage to the car. Then the weather reared it’s ugly head just prior to the Classic 125, causing the 350 Super Classic to be delayed and pushing the Star Classic on to early Sunday morning. Only 16 of the ISMA supers were able to make the call to start the Classic, unfortunately, with Ryan Locke 37 and Danny Connors’ 01 leading the way to green.

Only 7 laps were in before the red flag dropped when the 41 of Russ Wood spun off the track. While the 41 was able to get back on track, fluid was detected on the track, possibly from the Gosek 00, and a resulting in a lengthy clean up. In the interim, Otto Sitterly, who had already clinched the 2021 ISMA championship, had to leave the race to be able to get to his son Nick’s wedding. He had planned on running the Classic and then leaving but the early delay sent him out of the action.

Oswego Speedway regular Dan Connors took up the lead when the track was clean and the 01 began building up a strong lead out front with Ryan Locke, Jon McKennedy, Chris Perley, Anthony Nocella and Kenny White Jr. in pursuit.

By lap 18, Connors had put the 33 of Mike Collins down a lap providing a cushion for the 01. On lap 28, he had added the 27 of Jamie Timmons to the lap down crew. But, as suddenly as he worked on increasing his lead, the luckless Connors sat in turn four, out of the action on lap 31, a victim of a some contact behind him. This left the 79 of McKennedy in the front spot, a place he never relinquished.

McKennedy built up a lead of his own, as has been seen from the 79 when the Chelmsford MA pilot is out front. While Locke, Perley, Nocella and Mike Netishen kept site of the 79, it was evident that the $1000 halfway bonus donated by Shea Concrete, was going to McKennedy with little challenge as there were at least four lap cars between his car and the exciting 37, 11, 9 and 55 battle a distance behind.

Heading into lap 70, Locke and Perley were weaving in and out of lap traffic that McKennedy was providing behind him.

The Summers 5, being piloted by Ben Seitz, overheated and brought out another lengthy cleanup. It was here that the 125 lap Classic was reduced to 100 laps due to time and attrition.

On this restart, McKennedy had Perley, Locke and Nocella closer behind but it didn’t take Jon long to move away from any challenges.

On lap 90, only 3 other cars, Perley, Nocella and Locke, were on the lead lap behind McKennedy as Jon now only had 10 laps to victory with only 8 cars remaining of the race starters. 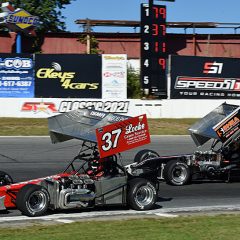 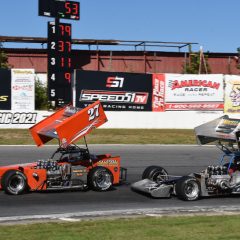 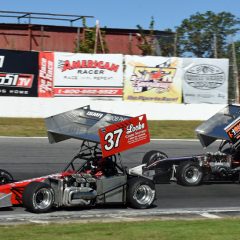 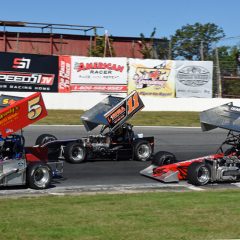 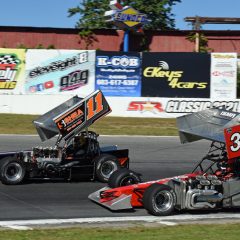 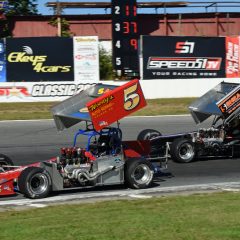 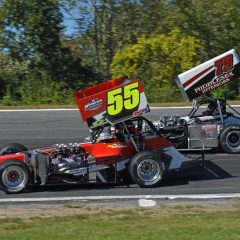 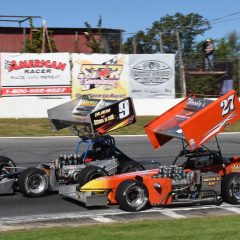 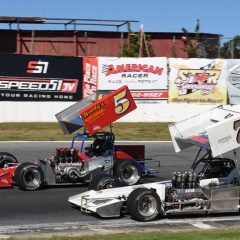 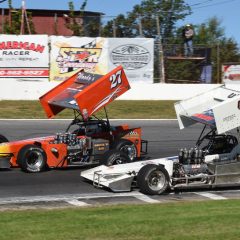 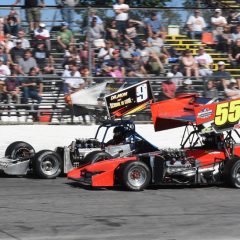 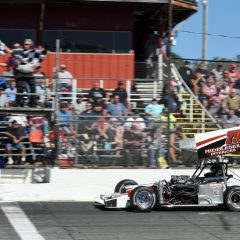 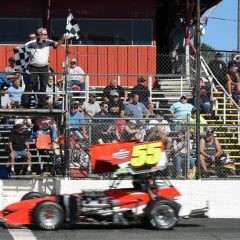 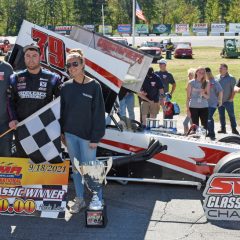 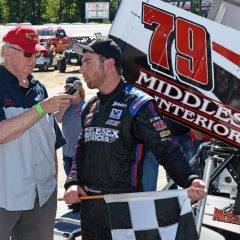 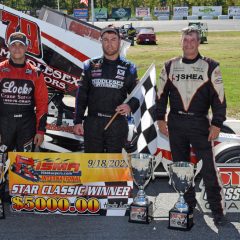 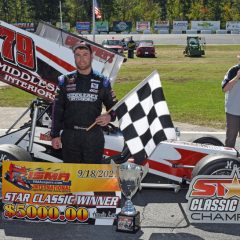 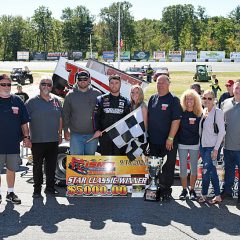 McKennedy easily took home his 4th Star Classic as the checkers fell, with Perley and Locke joining him on the podium.

Said McKennedy after his win, “This is a big deal It’s a big week with the Star Classic and having the 350 Super race named after my father who was a big part of my racing career. This feels really good. This is our eighth consecutive win in a row in ISMA races I’ve run. It just feels awesome. We had an awesome car. The crew worked hard all weekend. It felt good. That little burnout there was for all the cry babies all year who made a bunch of false accusations of traction control and other things. It feels great. Thanks. Winning another halfway bonus and other awards makes me feel real good.

Perley, who has five previous Star Classic wins, commented on his finish. “Second place – Got to thank sponsors, Ed Shea and the crew – they are the best. We weren’t as fast as Jon. I thought we might be better. I was really looking forward to last night’s race because I think we had a really good car for last night. We’ve never been great here during the day. But then Jonathan’s been on wherever and whenever and today he was a first place car. If we were in front of him, he still would have gone by us. But I’m happy. Second place is good. It was fun for a while. I didn’t have to spin anybody out – almost but not quite. I really didn’t know what was behind me. Did everybody leave? That’s too bad. We finally had a good car count and having four cars on the lead lap was not good. To see 22 cars in the pits for the Classic was really great. We only had 19 or so start but the quality of the cars is supposed to be up there right now and I know it’s the end of the year but it’s too bad more couldn’t have stayed in the race. But it’s hard to stay out there when your car is terrible. You don’t want to be in the way, but you need the cars out there to put on a show for the fans, to make lap traffic and to make things happen.”

Ryan Locke, who was headed to watch his younger brother Chase run the Dennis McKennedy Memorial 350 Super event, “I’m happy. It’s the best ever for me in the car. We’re excited and ready to build on this for next year. To be in the top three with those two guys was great. Well, Perley is somebody I’ve bee watching for my entire life. I’ve been a fan since I was born. It was cool to stay up with him. Jon McKennedy has been running with us for the last two or three years and it’s not a bad group to finish 3rd too. I’d like to thank Locke Crane Service, Chester General Store, Mom and Dad and my grandparents. They all help make the race car go around. I can’t appreciate them enough.”

Otto Sitterly who is no stranger to championships at Oswego Speedway, commented on his first ISMA championship. before he prepared to run the Star Classic and then head to his son’s wedding in Albany.

“Well, it’s been interesting. What’s that term – Covid? Covid has ruined the world. Yes, this first full year of running ISMA has been incredible. I have a great bunch of guys behind me. Joe Peri, he’s kind of the crew chief, Tom Shoull doing tires. And Danny Knipe and Dan Knipe Sr. We have a core of about 4 or 5 guys that are hard core and they want to travel. They want to do the whole deal. Obviously Johnny (Nicotra) has turned a little bit and has decided he’ll do the ISMA thing. So I have to thank all those guys. I have to thank all my sponsors, including some of the main sponsors – Corr/Pak, FatheadZ Eye Wear and Five Brothers, and my girlfriend Karen for letting me go on the road and supporting me. And, also my kids – Nicholas is getting married later today, and I talked to him last night and he said if I can manage to run the race and not miss anything, then you gotta run. So, it’s pretty cool stuff. Everybody is behind me. I’m looking forward for today. Hopefully we can have a good race. Jonathan is fast and there is Perley who has run this thing a lot. They’ve got their old car here so they will be tough. I’m sure there are some others who could be tough, but those two are going to be the guys who we are going to be battling. And, I hope to be right up in there at the end. We’ll have to see what it looks like in the early to mid stages gives us. But, it’s nice that the championship is all locked up so we can go out and try to race this thing today.”