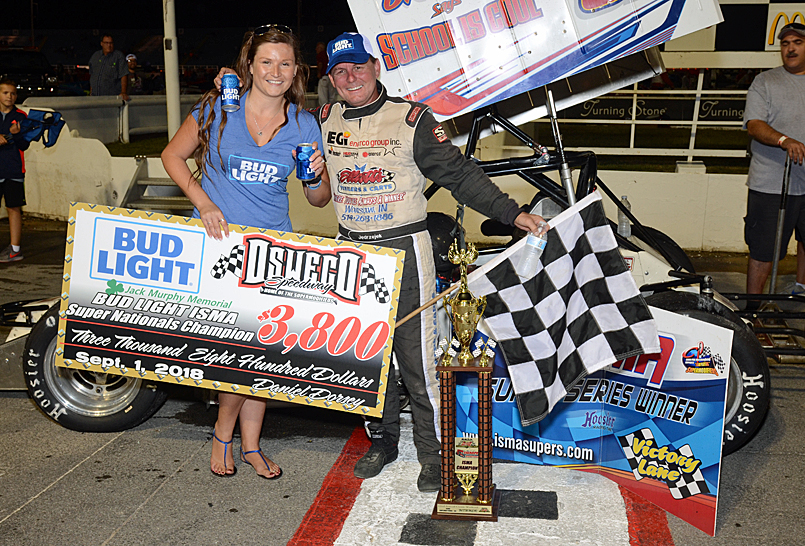 Oswego, NY – Saturday night’s Jack Murphy Memorial Super Nationals at Oswego Speedway featured more than a little drama with both excitement and heartbreak, some of which started prior to the race’s green flag. But in the end Ohio’s Timmy Jedrzejek stood in victory lane for his fifth Super Nationals victory of his career and his seventh career-Oswego winged win overall.

The win was a popular one as attested to by the thunder of applause that erupted from the large crowd on hand, as he pulled into victory lane. The driver of the Lane 97 was ecstatic with the win, but also paused to dedicate the race to one who was not there to share the moment this night.

“You know it was a heck of a run. I want to dedicate this win to Tyler Ricard, Rich Witkum’s good friend, who passed away this week. Rich has been a little down in the dumps and hopefully this changes the mood for tonight and puts a smile on his face. This is for him and Tyler.

“It was a great night. We led practice. We led qualifying. We won the heat and we pulled the four-peat off and won the Classic for the fifth time. We have been beat up for the last two or three races with bad finishes and bad luck. The guys dug deep in the shop this week. They really did a lot of work. Howie did everything he had to do to prepare the car. Then Rich and Jeff, Al, Robbie – everyone worked so hard. And Doctor Mom’s School is Cool, Enerco/Mr. Heater, Reader Electric and just everyone who helps support this deal. I can’t say thanks enough. This is a special place for me. It just seems to work with what I do and how I do it. Other tracks don’t work like that. But this one just happens to be one of those places that’s magical to me I guess.”

Describing his battle with the defending race champion, Mike Lichty, Tim went on to say, “Mike was outside of me a couple times. He was much better than me in three and four. He would get there but I was much better in one and two. And, I knew if I could stay side by side with him going into one and two or at least, I felt like I had the car to do it. And that’s exactly what happened. I could power off and I just drove as hard as I could those last three or four laps. Thankfully I didn’t see him until the last two laps maybe. On the last lap I got a little crossed up with the lap cars in front of me going into three and four. And I was thinking ‘oh which side is he coming on – right or left’ because I felt I was a real mess. I guess I was good enough to pull off four and win the race.

“I couldn’t say anything but thank you to all my crew, the Oswego Speedway and to the fans who came today. This is a great race and I’m going to enjoy sitting in the stands tomorrow watching another great race, the 200 and rooting for a couple good buddies of mine who are running in that.

Lichty had this to say of his fight for the lead. “It was a good run. I would have liked to win obviously. But it’s fun. I like coming to this race track. It was a fun race. We just missed it a little bit today and it showed in the feature. I want to thank everybody on the crew. Reed’s Salvage, Patco Transportation. Level Performance, Corr/Pak, Ed Shea, Hoosier Tire, everybody that supports ISMA and all the fans. It was fun racing with Timmy. I had him a couple times on the outside there and just couldn’t pull it off. It was between lap cars and I thought I had him cleared a little bit down and then I drove real hard down in one and kind of skated the nose a little bit. But that’s racing. I’ll take this second and move on to Star next week.”

Chris Perley, who holds a pretty good record over the years at Oswego Speedway, including a non-wing win in May, was a little down on himself after the race was over. “Third place is good at Oswego. I want to thank the crew. They worked hard. We had good motors and everything. But I’m disappointed in myself for telling them to do the adjustments in the car that didn’t work. If we had done the right things we just could done better. We had the car. But I just killed it. We were too tight. I’ll get it eventually. Maybe at Star next week. A win that weekend would be fun. But now it’s on to tomorrow.

The night started on a sour note for several of the 21 drivers on had to contend for the 25th annual Super Nationals. In pre-race warmups, Rich Reid, who had won his heat earlier, suffered a hard hit into the foam between turns 3 and 4 in his 55 before the race even started. A broken wing bolt was the cause. Just prior to that, outside front row starter Dave Danzer had scratched from the event, leaving Tyler Thompson his spot.

Thompson, very new to the winged super game, was sitting alongside Timmy Jedrzejek when the green dropped and a slight bobble by the 97, gave 16-year old Tyler Thompson, the lead as the flag dropped.

The 98 didn’t waste anytime taking advantage of his opportunity and he took off, leading for 20 laps, Unfortunately for Thompson his night ended in a scary cloud of smoke and a fire when the motor blew on the 98 on lap 21. He was okay but his car was not.

Ironically, second place runner Trent Stephens took over up front but only for a very short time when his 19 slowed out front, bringing out a yellow. His car also had motor problems and he pulled off the track.

Now it was Timmy Jedrzejek’s turn to lead and he wasn’t going to give up the spot as he took off with the likes of Chris Perley, a four-time Super Nationals winner himself, Mike Lichty, Michael Muldoon and Ben Seitz now ready to get moving forward.

Soon chasing Jedrzejek intensely was Mike Lichty, who had won the race in 2017, after Mike got by Perley. As the race sped on without any further yellows, closing in but not really catching the lead duo as they battled up front were Chris Perley, Dave Shullick Jr. and two-time feature winner in 2018, Mike Ordway Jr.

With 20 laps to go, the 97 and 84 went back and forth, closing up and then pulling away as a distance back were Perley and Dave Shullick Jr., Then came Ben Seitz in the charished 32 so well-known to fans of all eras, Ordway Jr., Muldoon, Kyle Edwards, Mike McVetta, Mark Sammut and Dan Bowes, who is in a fight for the ISMA point championship with Edwards.

Jedrzejek made it his day as the checkered fell on lap 60 with a little space between he and the Lichty car. Perley, Shullick Jr and Ordway filled in the top five.

Shullick commented as he was aleady preaparing for his Sunday defense of the Classic 200, “It was a good run. Starting 15th was difficult. It was a little tighter in three and four than I would have liked it for sure. But we stayed with it and battled and battled and ended up in fourth. We’re happy with that.”

Ordway Jr., was also pleased with his run. “ We just over adjusted to be in traffic the whole race. We had the speed in time trials and the heat race practices. We just thought the track was going to change a little more than it did. It’s kind of self-inflicted, but the car is in once piece. So we’ll go to Star with two wins and a fifth here. We’ll go back home there and see if we can get one close to home.”