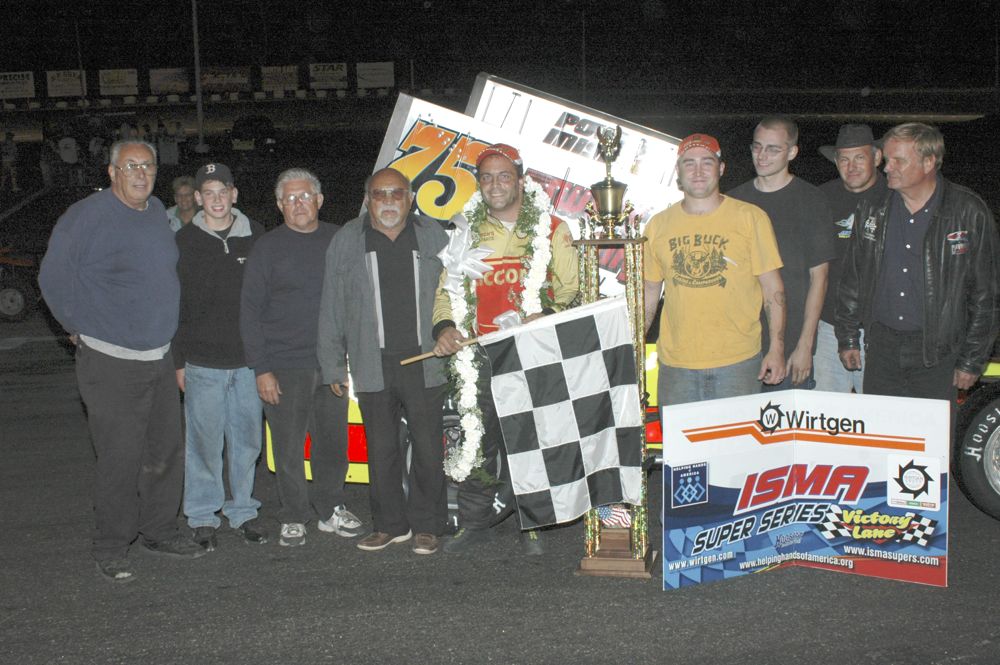 Epping, NH – It was six years ago that Lou Cicconi stood in victory lane at Star Speedway. It was with a different car owner and car. This Saturday night, he won his second Star Classic – this time in his own car and with a crew that knew well the ways to win. Just five days previous, Cicconi might have been the victor at the rain-delayed Oswego Classic, but things didn’t work out. This Saturday things worked to perfection. It was an easy drive for the Aston, PA driver this night. On lap 57, Cicconi pulled by race leader Nokie Fornoro and was never really headed after that. The win was also his second of the 2006 ISMA-Wirtgen season.

Lou commented on his second prestigious Star win. “I think my first Claasic win was more lucky than this one. But, I’m not so sure. We started the day off with some new setups. And then when it got serious it all came together. It was good. The car was like a breeze to drive. I can’t believe I finished as far in front as I did. It was good. It’s a tough race. Realistically if things would have gone differently last week (at Oswego), I might have had two Classic wins. Unfotunately Dave (McKnight) and I tangled.

“Brian and Doc and all the crew give me a car that you can’t help but win with. They’ve had a few wins up here. I’d like to thank Randy Sweet. He hooks me up with all my steering components – especially last week at the Classic as well as here. Brian Allegresso and Jerry, Phil, Doc and Christopher and my father – the whole crew.. I can’t wait to go back to Oswego next week.”

Fornoro did his best to stick with Cicconi, but only really closed up the gap in traffic situations. But to the high rate of attrition, those situations were few and far between.

“I seem to be a bridesmaid here a lot,” said the driver of the Soule Racing 32. “What can I say about the team I have that I’m fortunate to drive for. These guys break their butts. Everybody knows how everybody likes their team, but these guys really break their butts and they gave me a wonderful car. I can say what we needed now after the race is over. As I’m sure they will when we talk. I could have used a little more wedge. Louie could get off the corner better than me. But, 200 laps. I’m happy. We finished in one piece. No one got hurt. Hopefully Star will stay open and maybe I can win one of these yet. Congratulations to Louie on his win.

The last car on the lead lap was Mike Ordway who had taken a trip into the woods off pit road earlier in the day when a spindle broke, causing him to lose his brakes. Ordway started seventh in the 41st running of the 200-lap event and picked his way up to fifth just before the lap 60 mark. Said Ordway of his podium finish, “I just kept plugging away and ended up third. We’re still struggling a little bit, but I held on to get third. We’ll just keep working at it. You can’t give up. It’s a pretty good finish considering our little accident earlier today.”

The top sixteen time trialers were locked into the Star field and the top ten handicapped by the money won system giving Mile Lichty and Joe Petro the front row at the green. The young Canadian Lichty drag-raced Petro to the line to lead the first two circuits before Nokie Fornoro moved up from fourth to take the point.

Current ISMA point leader Chris Perley sent up a shower of sparks and dust on lap five as he left turn two, drove halfway off the track and gathered his 11 back up just at the yellow flew. He was now at the back of the 22-car field instead of in his ninth starting spot. Describing the incident later he said, “At the beginning I was loose and I chased it and I ran out of track so I fell off. I told someone else that I saw a beer can out there and I thought it might be full.”

As Fornoro ran out front with Cicconi soon tucked in behind after passing Lichty, cars began to drop by the wayside including Bob Timmons, Mark Sammut and Dave Trytek.

On lap 32, another yellow fell this time for the 88 of Scott Martel who was hooked off the track. While Martel was being assisted, Rick Wentworth and Vern Romanoski left the field.

Petro suddenly pulled off the track on lap 56 with a broken front snout as Cicconi grabbed the lead from Fornoro a lap or two later.

Bob Magner brought out the next flag with a simple spin on lap 60 with Cicconi resuming his command on the lap 67 green.

On lap 75 the top five remained Cicconi, Fornoro, Lichty, McKnight and Ordway with Belifore,Timmons, Warren, Santos, Rob Summers the next five. Perley was up to eleventh at this juncture.

By the midway mark, it was all Lou as he had Perley in his sights to put him down a lap. On lap 103, the 11 was saved by the yellow flag that flew for Dave McKnight who had a magneto problem that stopped his 94 in turn three.

Green fell on lap 106, but changed to yellow on lap 110 was Jamie Timmons and Warren tangled with Timmons getting the hook and Warren going a lap down on the pushoff.

By lap 123, Cicconi was breezing out front of Fornoro with Lichty and Ordway fighting for third while Bob Santos had moved into fifth. Justin Belfiore had a strong run going in sixth as Chris Perley moved into seventh. Vern Romanoski left the race moments before the counter clicked off 124. One more click of the clock found yellow unfurled again for Bentley Warren again, who had tangled with Joey Scanlon’s 55. Bentley restarted at the tail of the shortening field.

Cicconi has a long string of green ahead now as he continued to put cars down to his flying fluorescent 75. Fornoro was alone in second as Lichty, Ordway and Santos made it a race for third. Belfiore and Perley were the last cars in the lead lap as the race flew by.

At the lap 175 mark, Cicconi had three lap cars between him and Fornoro while Lichty had Santos, Ordway and Belfiore behind him.

Twelve laps later, the boy wonder Santos had put the Lane 97 into third, leaving Lichty, Ordway and Belfiore the last cars in the lead lap after Cicconi flew by Perley to put him down one.

Cicconi was coming up on Belfiore as he traversed the quarter mile unimpeded, but on lap 193, the Lane 97 of Santos became a non-threat when the car slowed and pulled into the infield out of fuel – for the second straight Classic in five days.

Yellow on lap 198 delayed the Cicconi celebration for a few laps when Joey Scanlon slid off the track in two. Moments later while Joey was getting pushed around, Justin Belfiore’s 8 sputtered out of fuel also. “I think if we had a little bit more fuel,” said the Ipswich driver, “We might have finished fifth. I’m happy. The car was good all day. I hated that we got passed by Perley at the end, but what are you going to do?”

The race now resumed just over the lap 200 mark with a green checkered, which went to Cicconi. Fornoro finished up second with Ordway third and Chris Perley fourth after a mistake that found Lichty not taking his place behind Cicconi after being lapped during the late race shuffle. Lichty would finish fifth.

Perley, who has become accustomed to finishing up front, but not one lap down, commented on his fourth place run. “I wanted to pit but there is nothing you can do here and stay on the lead lap. So I figured I’d stay out here as long as I could in the lead lap. Louie didn’t lap me until about ten to go or something like that. I knew that we were in pretty decent in the standings – not shape – but standings. I guess we needed a point race tonight, Louie gained some but it was a good race. Congratulations to him.”

Lichty, who thought he finished fourth until learning his fate, indicated that his car was not right anyway. “We finished fifth. The car was decent although our brake issue came back again from Sandusky and it got us again. With thirty laps in the race the problem began. We’ve just been having problems with the tires the last couple weeks. We had the same situation happen at the Classic. We came an inch too big in stagger and an inch too short. We were just too tight. I just want to congratulate Louie and the whole crew and to thank my dad, Patco Transportation and Stage Door.”