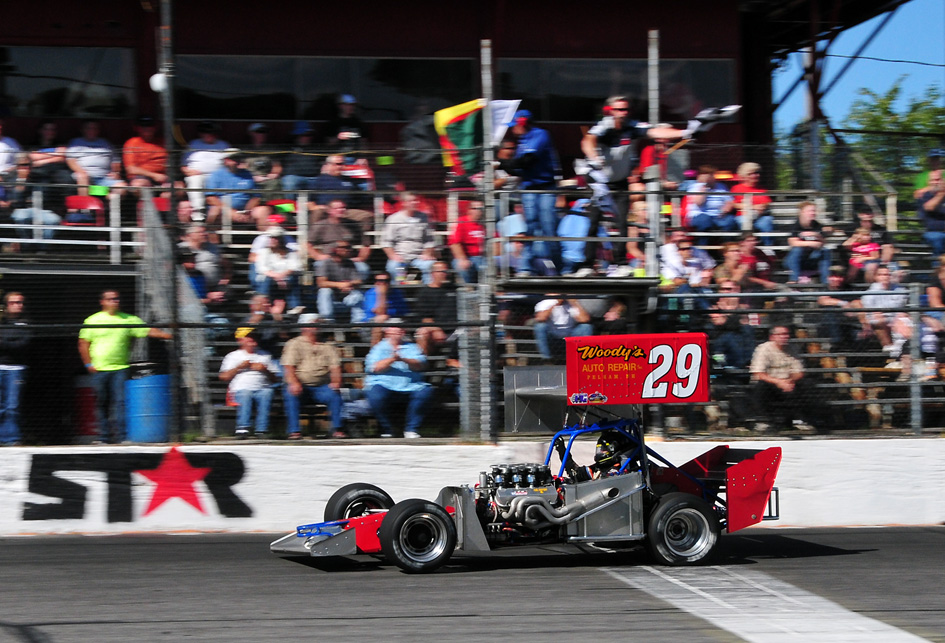 Epping, NH – Veteran supermodified driver Russ Wood started the 2012 race season without a ride, but just past mid-season he was back in a Brian Allegresso-prepared supermodified to compete. Saturday’s annual Star Classic was one prize he had his sites set on. A win of that 150-lap prestigious event would put the Pelham, NH pilot on top of the win list, breaking his tie with legend Bentley Warren for the most victories. Rain stopped the race on Saturday night with the conclusion to be run on Sunday, Sept. 9. Wood’s objective changed overnight as Sunday he was racing for a good friend’s dad who had passed away more than anything else.

In a very emotional victory lane, Wood said of his 7th and tie-breaking win which played out over two days, “The car was really good. I could pick and choose. It was just such a great feeling. It’s unreal how the car felt. It was just a pleasure to drive. This means so much. I was supposed to be in a funeral today. A good friend of mine Don Guilbeault’s  father passed away. And I couldn’t make the funeral. He just told me to bring the trophy home.  And, I did it.

“The seventh Classic. It’s unreal. I never thought I’d be above Bentley. I love racing here and the cars are awesome. They are all just great people to race with. Just to be up in that category with Bentley and Chris Perley is unreal. It’s something I’ll carry with me the rest of my life. I love doing this.

“A special thanks to Byrne Towing, Sweet Manufacturing, JWJ Industries, and my car owner Brian Allegresso. We have a new Dowker motor out of Charlotte, Michigan. That was awesome.

The race left off on Saturday night on lap 35 when torrential rains fell after valiant attempts all day to get the race in. The leader when the race was stopped was Eric Lewis with Wood only in fifth. But it was a young race and things change, often dramatically, in the historic event on the NH quarter mile oval.

By race end on Sunday, Eddie Witkum had fought off all kinds of adversity to come in second to the high-flying Wood. Said the Westford, Mass. driver after his podium finish, “Yesterday we knew we had a good car. It was fast on junk rubber. We didn’t get to race last night. We broke the drive shaft running second when the rain came out. We put a new drive shaft in today and started 16th or something like that. And, then we had a hard day turn worse. We spun out a couple times and under that red we brought it in and made some adjustments and it worked. I didn’t have any forward bite or anything before that. Once we got that back, the car was good. This is my best finish in the Classic and best in an ISMA race. I’d like to thank Lee Vinyl, Bobby Harrington, Essex Seafood, Dr, Mom Says School is Cool, my Uncle Bob, my family, everybody that helped out today, all week, all year, Scott Sherman here. It’s been a roller coaster of a weekend but we came out of it good.”

Lou Cicconi, who had worked his way up to second, fell victim to Witkum’s marathon run to finish third. He said honestly after the race, “I just got lucky, that’s all. I never had anything all day. I just lucked out to get there I got. I’ll take third, but I’m not happy, but I’ll take it.”

The 46th annual Star Classic field of 23 winged ISMA supers, was led to green by Justin Belfiore and Dan Bowes with threatening weather all around the area. Belfiore grabbed a quick lead trailed by Eric Lewis and Witkum as the thoughts of rain loomed in everyone’s mind.

Belfiore ran out front pressuring his 98 to the max until lap 28 when he suddenly exited the race with a throttle problem to end his night with a 23rd place finish. Eric Lewis took up the front spot but cautions began to play a role. First on lap 30 when the 35 of Mike Caswell was hooked off a mound around a light pole, to restart tail. Then again with a melee in turn four on lap 31, which affected Mike Lichty, Jamie Timmons, Caswell, Dave Duggan, Tim Ice and Joe Gosek. Rob Summers took the Miller 11 in during the cleanup with a broken read end problem that eliminated him from competition.

Lewis took off on the restart with Witkum, Mark Sammut, Johnny Benson, and John Gambuti looking to take over the lead. But on lap 35, continuation of the race was doomed when Dave Duggan, Mike Lichty, Craig Rayvals and Joe Gosek took to the trees in turn two as Witkum fled the track down pit road on the other end. After digging Lichty out of the trees and some cars pitting and returning, the green never fell again as the rain did; first sprinkling and then pouring to end the night. Belfiore, Summers and Caswell were out of the racing for good, but 20 cars were ready to restart the next day.

The green dropped on Sunday just before 1:30 pm. A quick yellow for a Dave Duggan spin came before one lap was done,  but the next try at a start held as Lewis was once again off and running now with Mark Sammut, Johnny Benson, Gambuti, Wood, Cicconi, Timmy Jedrzejek and Mike Ordway Sr. bearing down on the leader.

Jeff Locke brought out the yellow on lap 41 and again on lap 42 to end his day while Dave Duggan, who Locke was following, was then brought to a stop to check for an oil leak. He too found his Classic to be over.

Lewis maintained his lead on the green with Benson, Sammut, Wood, Gambuti, Cicconi, Jedrzejek and more right behind as the race approached the lap 50 mark. The battle up front became intense as Lewis tried to fend off both Benson and Wood while Sammut and Gambuti held up the top five.

On lap 70 the rapid pace slowed when Witkum drove his 97 off turn 4, through the infield and back onto the track in between turns 1 and 2 never skipping a beat. But the flag had flown for him and he restarted back at the rear – again as his roller coaster race continued.

The closing up of the field allowed Benson and Wood to again dogged Lewis with Wood claiming second from Benson. Back a slight distance Sammut was holding off Gambuti and Cicconi while Ordway fought with Jedrzejek and Abold. Point leader Lichty was fighting back up and now was behind Abold.

On lap 80, Russ Wood drove outside race leader Eric Lewis who was approaching a slower car, to take the lead, one he would not relinquish.

Lap 82 saw Benson slow abruptly with a broken heim end sending the third place runner, also fighting for a top spot in points, into the pits. Witkum, in the meantime, pitted again and started at the rear – again.

Wood left Lewis behind on the restart to contend with Sammut, Gambuti, Cicconi, Ordway and Jedrzejek as Lichty and Abold ran side by side just behind.

Amazingly, on lap 88, Eddie Witkum would spin the 97 one more time, again without stopping, but still but still be was back at the rear.

Just prior to the 100th lap, Mark Sammut’s fine run came to and end as his 78 blew a motor big time creating clouds of smoke, spewing oil all over and a lot of cleanup. Red was dropped as the speedy dry was spread around the track. Going into the pits was Witkum who would finally get the adjustment needed to propel him into second. Also pitting were Dan Bowes, Joe Gosek and Jamie Timmons. Sixteen cars remained when the red turned to green on lap 97.

It wasn’t long before yellow flew again however,  on lap 109 when Lichty was stopped in turn three ending his day while Timmy J fled to the pits after contact with the 84 to get some needed repairs. Jon Gambuti also was sent pit side to fix an errant tail section.

Back underway; Wood was cruising out front as he pulled away from Lewis, Cicconi, Ordway, Abold, Ice and Gosek. Eddie Witkum worked his way quickly to 8th as attrition was decreasing the field, making Witkum’s trek forward a little easier each time.

With 20 laps to go, Wood was definitely in command, with Lewis still in second followed closely by Cicconi, Witkum and Ordway. Jeff Abold had the Dawson 28D, a lap car, in between his 05 and the 61.

With 15 to go, Cicconi was moving on Lewis while Witkum waited to see how the action in front panned out. Wood, by now, was half a track away.

These were the last slowdowns of the race. Wood had three lap cars between him and the Cicconi 75 while Witkum was coming alive in third, trailed by Ordway, Ice and Abold, who was also getting his car to come around to him. On the second restart, Witkum got by Cicconi for a second place spot in a most amazing run.

The last ten laps found Abold the mover as he was able to get by both Ordway and Ice for fifth. At the checkered it was Wood well out front of Witkum, Cicconi, Lewis and Abold.

Lewis, who was the leader of the Classic over the span of two days, was content with fourth. Laughing when asked to describe his fourth place run, “It only took me two days. I was telling the guys that I’ve led the Star Classic for more hours than anybody else. It was a good run. The car was loose from the drop of the green last night and today. But, I think we were a little bit better last night than we were today. But, we had time to adjust and maybe we should have made a few different moves. So I think we were pretty fortunate to finish fourth. It was the first time out this year for the car after fixing it from Waterford. This was a good finish. We’re pretty happy and hopefully we’ll be able to be at Seekonk with it.”

Abold described his first winged outing in the 05 this way. “At the beginning of the race the car was really, really tight. I was watching everybody getting loose and I kind of bided my time a little bit. The car didn’t really come around the way I wanted it to until that very last restart. The car was great then and it was what I was hoping for, for the race. So, I was able to make up some positions in those last ten laps or so. For putting a wing on for the first time and going out there to finish fifth, I was very happy with that and the run. This is not an easy group to out and slap a wing on and race with. I don’t think racing night and day made a big difference. It gave us a chance to adjust the car and I think we did help it. We got to a point where we were in better contention than last night.”

Ordway, Ice, Gambuti, Gosek and Bowes rounded out the top ten at the checkered.

Star Classic ISMA summary:
Top 16 locked in from time trials and handicapped, with fast time going to Jeff Locke. Due to weather conditions on Saturday, no consi was held and the last six in the field were lined by times, with one provisional.