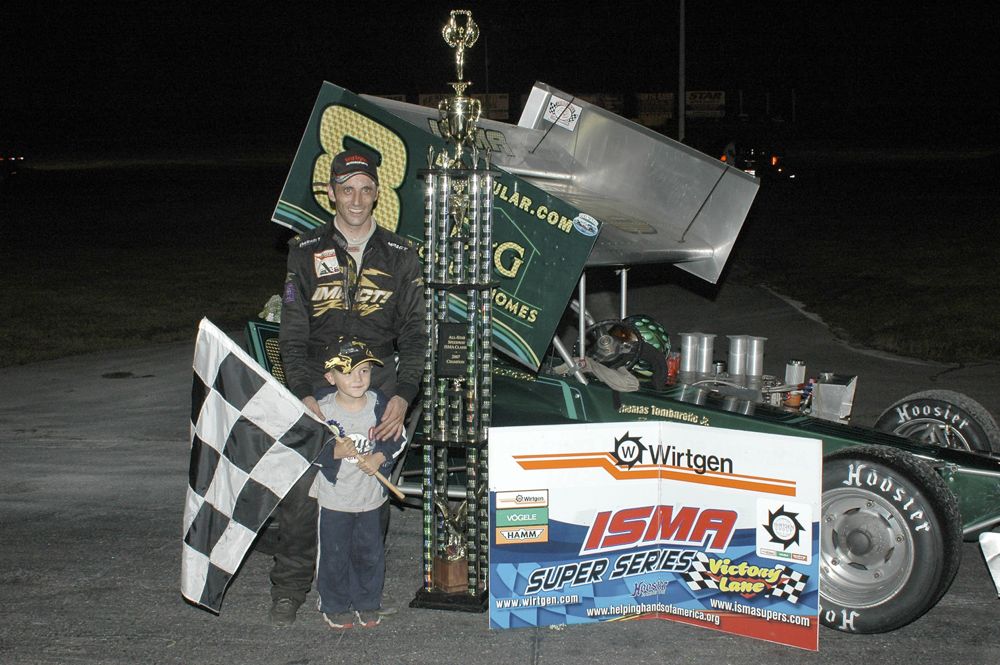 Epping, NH – Ipswich, Mass. driver Justin Belfiore took a dominating win of the All-Star Classic Saturday night – a race he’d always dreamed of winning. He led the way after the first segment of the race, reformatted this year into two 75-lap segments. He then went on to dominate the second portion, especially after ISMA point leader Chris Perley had been eliminated late in the first race in a hard crash off the first turn. Justin acquired his third career ISMA-Wirtgen race by taking the prestigious Classic win and he also was able to give his young son Justin, a sweet birthday present to remember.

“I can’t believe it,” said Belfiore in victory lane. “The lap traffic was kind of tough. I’ve been doing this for a long time. I had a perfect car. My luck finally held out. I ran lean in practice and the team made it just right. I thought Chris was going to be tough there as the race went on. He and I were kind of swapping spots a couple times but then he got in that accident. I didn’t know if I had anyone to race with. He was the only one that was passing cars the way I was.

“First of all I’d like to wish my son a happy birthday. It’s his birthday. He was born on the Star Classic like five years ago. This is pretty cool. And, D&G Modular Homes, without them I wouldn’t even be racing. I’ve been through a lot of bad luck the past few weeks and I’ll tell you I would be here without him. My father – what can I say? He gave me a perfect racecar. He’s heart and soul with this car. He’s out in the garage every single night. I don’t know how he puts up with me. I don’t even know what to say. I’m at a loss for words.”

After a rearranging of the order after a scoring check, Jeff Holbrook, driving the Brian Allegresso built 35, was determined the second place finisher. Jeff was a tired, but ecstatic guy in the post-race interview back in the pits. “I started 19th and finished 2nd. The longer the car ran, the better it got and the more tired I got. I’m ready to run some twin 35’s somewhere instead of 75. Seriously, the season has been disappointing for Brian and those guys. I was just glad that I could get my head together and do a good job today. It’s my best finish ever with a wing on. I’m sorry Bobby and Dave didn’t have better luck. This is a tough track. I don’t think I ran the right line until the last 25 laps. Brian was working with me all weekend to get me to drive the right groove. I finally got it at the end there. The highlight of my race was passing Russ Wood because I look up to Russell after him driving my cars before. That was fun chasing him down and passing him. And, passing Bentley, too. They are two of the greats.”

The third place finisher was none other than five-time Classic winner Russ Wood. Wood had been thought to be a lap down, as had been Holbrook, but the recheck said no. Driving the Martel Motorsports 14, Russ had come to life in the second half, ala Classics of old. Car owner Scotty Martel said it best. “Russell Wood was driving like the Russell Wood of old. The changes we made after the first 75 obviously worked. He drove his butt off. He gave us a 100% just like we knew he would.”

Russ was elated with a top five, wherever it might be and it was third. “We’re really happy with a top five. The guys worked really hard all day on the car and they got it in good shape. We lasted the whole thing. Everyone had to deal with the two 75’s, which was kind of cool. It changed the whole strategy of the race. I did get into Jon McKennedy there. I made a mistake and I feel bad about that. I hit him in the left rear and spun him around. It was a racing thing. All in all we’re happy to be here in one piece. I liked the two segments. It allowed the guys who were hurting to change things and come back in the second part. It might have made it a little more interesting or Justin might have lapped the whole field.”

The first half of the 150 lapper started with Mark Sammut into the wall, but able to restart. Bob Magner, from the pole quickly took the point with Kyle Carpenter, in the Roundy 76, right behind. While this young duo maintained the front spots, the cars behind were playing out their strategy as Jon McKennedy, in the Dunigan Motorsports 79, Robbie Summers and Lou Cicconi third through fifth.

A yellow slowed the race on lap 20 with Scotty Martel going off the first turn in sparks. On the restart of this lap, Jeff Holbrook spun around but regained his car and went to the rear to start his trek forward.

Magner, Carpenter, McKennedy, Cicconi and Summers awaited the onslaught as Joe Petro, Mike Lichty, and Jamie Timmons tried to hold off Chris Perley and Justin Belfiore who looked to be the fast men. Jeffrey Abold in his first-ever visit to All-Star and Mike Ordway Jr. were running wheel to wheel next in line.

Lap 34 saw Robbie Summers making contact with the Cicconi 75 and both went pit side.

A couple more quick cautions fell between 35 and 37, one a precautionary for Perley, who bobbled and then kept going. The second was for Mike Lichty who was having car problems.

With twenty-two laps to go in segment one and Magner well out front, yellow flew for John Payne who had spun in turn three. Unfortunately, a slowing Kyle Carpenter in front of Chris Perley, who had just moved into third, caught the 11 up and sent him hard into the wall off turn one. His quest for a third Classic win was over before halfway.

One more yellow on lap 54 came before the first 75 was checkered when Dave Trytek and John Payne came together. Both restarted.

Justin Belfiore, who had moved methodically forward was now third behind Magner and Carpenter. After the restart, he was second. On lap 57, Justin swung the Belfiore-built 8 around leader Magner and off he went.

Due to the lateness of the hour after rain had put a delay on the day’s activities earlier, only a short time elapsed before the start of the next 75, which would never be completed.

Belfiore had a couple lap cars in line behind him on the straight up restart and off he went, leaving second Carpenter, having lost power steering, McKennedy and Abold were waging one great battle behind.

On lap 22 Abold and McKennedy brushed sending Abold out of his first Classic. A few more yellows affected Jamie Timmons, Mike Lichty and Magner with Timmons the only returner here. On lap 28 Russ Wood slid into McKennedy to send him out. The top ten runners were being eliminated rapidly.

Justin was well in command as the race resumed. Wood, Petro, Holbrook, Haynes, Ordway Jr. and Timmons were about the only lead lap cars remaining as Justin charged around his hometown track. Unfortunately, while the laps wound down, so did the time, which was mandated the race end at midnight.

Haynes, who had finished top ten in the Oswego Classic the previous weekend, saw his second top ten fail with a smoking car and a black flag on lap 56.

Jamie Timmons, running fifth, was about to befall the Belfiore charge when yellow flew on lap 65. Time was up for the race at that point and the checkered was thrown shortly thereafter. The clock tolled midnight and end of the race. Justin Belfiore was the certain winner, dominating much of the race while Joe Petro and Jamie Timmons was called to the podium. Unfortunately they were moved back a few spots after the recheck.

Petro said briefly not quite accepting a second place in victory lane, “At the beginning of the race my car was really good and at the end it was super loose. It was pushing. We didn’t know what to do at the break there so we just left it. We haven’t run the entire season this year and this is great.”

Timmons wasn’t really sure where he was either. “I’m not really sure how I made it. We made some changes after the first yellow. We put a different right rear on and tightened up the stagger. Tonight wherever I finished – it’s a good run. I have to thank everyone who helped me out and everybody who’s stayed with me through the years. And my sponsors Red’s Speed Shop, Woody’s Auto and Kinglsey Automotive. It’s good to come back to the home track where I used to run the small block and have a great run in the Classic.”

Top twelve time trials inverted for start with next four in line.