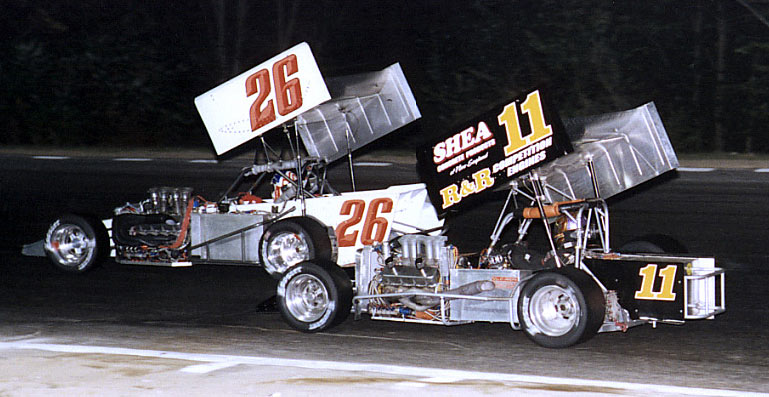 Epping, NH – Pelham, NH’s Russ Wood took the lead of the 37th annual Star Classic Saturday night when his teammate Bentley Warren slipped up a little on lap 42. Russ made it look easy after that taking the checkered at the end by half a track length. It was his third win of this prestigious 200 lap event in six years. For Wood it wasn’t as easy as it looked. It wasn’t run quite the way he likes.

“This win is as good or better than the first,” said Wood in victory lane. “These wins are hard to get and it felt really good to win it. Bentley just took off and I figured my car wasn’t using the tires too bad, so I followed him. I would have liked to drop back, but I had some heavy hitters behind me. My car wasn’t slipping the tires, so I continued to cruise. I figured traffic might help if I could put a few lap cars in between. This isn’t how I usually run a race, but you do it any way you can do it. While there was no one close to the 29 for the last 40 or 50 laps, Russ wasn’t really aware of that fact.

“I was kind of running scared,” he said describing his race.. “I was waiting for someone. I thought I could hear someone back there. I saw Joe and Chris go out and I figured Mike would be there. I was worried about Furlong too. I didn’t know he was up there, but I figured he could be a contender. I didn’t know how far out I was and then someone flashed a camera and that’s usually a sign that someone’s on you. I just thought I heard someone back there. I have good hearing I guess. Then Joey Payne came out from where he was in the infield and showed me how far out I was. Everything just worked out good.”

After the demise of several potential challengers, Mike Ordway ran in second, but not close enough to make an attempt at the lead. Said Mike later, “Everything just was worn out. It was a pretty fast pace right from the start. I had to keep up with them. So we kind of wore it out at the beginning and that’s all we had at the end. The lap cars were good tonight. They stayed right over where they should have been and they gave us the room we needed.”

Finishing third in his first ever appearance at the New Hampshire oval was Greg Furlong who earlier in the day met with the wall after a hub broke and could have been a dns by feature time. Said Furlong after his third place run. “The car at the beginning of the race was actually pretty loose. For some reason after a caution it got really, really tight and came together. I wasn’t positive for a while I was in third or not. I saw Ordway and I knew he was in second. So, I figured I was in third. I just kept digging and digging The car was pretty good. Lap traffic did a great job. They moved down to the bottom and gave me the outside groove. This is my first time here. It’s not a bad track. It’s pretty small, but I like it. We had some bad luck there. We were quick in practice and then I had a front hub break and I hit the wall. That destroyed the car. My crew put the car back together. They worked really hard. My crew did an awesome job tonight. Without them I would not have been here.”

A formidable front row of two multi-time Classic winners and former Indy 500 competitors – Bentley Warren and Joe Gosek led the 22-car field to the green for the Classic 200 with Warren taking up the lead. Six-time Star Classic winner Warren took up a torrid pace leaving the others quickly behind. Wood, as aforementioned had no choice but to follow and he was into second by lap 7.

A quick yellow flew on lap 33 for the 33 of Jen Chesbro who did a simple spin off turn four.

The race went green again on lap 41 and as the leaders came off turn four of that circuit, Warren’s 7 slipped up a tad and left the opening for Wood to take over the point. Joe Gosek ran third as Chris Perley, Dave McKnight, Mike Ordway and Scotty Martel were the next contenders.

A three-car tangle on lap 45 send Lou Cicconi, Joey Payne and Eric Lewis into the infield on hooks.

When the race went green on lap 57, it stayed that way for almost thirty laps with Wood and Warren the top two while Gosek, Perley, McKnight and Ordway stayed right there. The battle was between Gosek and Perley much of the way as the pair swapped third several times with lap traffic the key.

On lap 86 the 27 of Jamie Timmons, who had re-entered the race laps down, spun to the infield kicking up smoke and dust. Unfortunately, the 7 of Bentley Warren stopped to avoid and although he did not lose a lap, he was relegated to the rear to start all over again.

Said the legendary Warren later, “We ran a lot better tonight than we have been going. We got out there but somebody spun and put dust all over and I had to stop. I didn’t want to wreck the car. I got back up but Russ was out there. He was doing a heck of a job. Good teammates. It was fun.”

It was Wood, Gosek, Perley, McKnight, Martel and Ordway the top six at the midway mark and once again a long green streak ensued. Wood began to lengthen his lead while Gosek and Perley fought behind. Ordway slipped past McKnight for second on lap 118 while moving slowing and methodically up through the somewhat smaller field was Greg Furlong.

It was deja vu for Perley, however, as his third place run halted on lap 127 when a torsion link broke sending him out of the race on the hook for the second straight week out of a Classic. It was heartbreak again after a long hard week in the garage for the Vic Miller team. Perley commented later, “Obviously everybody knows that we killed ourselves all week to prepare the car. We had an awesome car tonight…a potential winner. The right front torsion link broke when we got up to third.”

Wood’s potential challengers were falling by the wayside as the race approached the 150 mark. But Wood didn’t let up. He was behind Warren to put him a lap down by lap 171 and closing on McKnight, in fifth, soon thereafter.Gosek was the next to exit the field. At lap 180, Gosek’s 26 slowed suddenly while running second. With sparks flying from a flat right front, Joe tried to limp to the outside and into the pits, but the yellow flew to slow the race.

When it resumed on lap 188, Wood had four lap cars between his 29 and the second place 61 of Ordway. There was no stopping Wood now, and he cruised out front for the remainder of the race while Ordway ran second, and Furlong third, the only cars left in the lead lap. McKnight and Warren finished up the top five a lap down.

McKnight, who has not notched a win this season, was satisfied with fourth. “It’s been one of those years – fourth, second, third. It was a good run,” said Dave. “The guys did a good job. We just didn’t have the car. We had a top five car. I’m happy with it. Now I think we’re second in points. So I guess that shows how much you can go without having a win as long as you’re consistent. Russ is a little bit ahead now, so have a lot of homework to do if we’re going to catch him. We’ll head to Cayuga and Kawartha and see what happens.