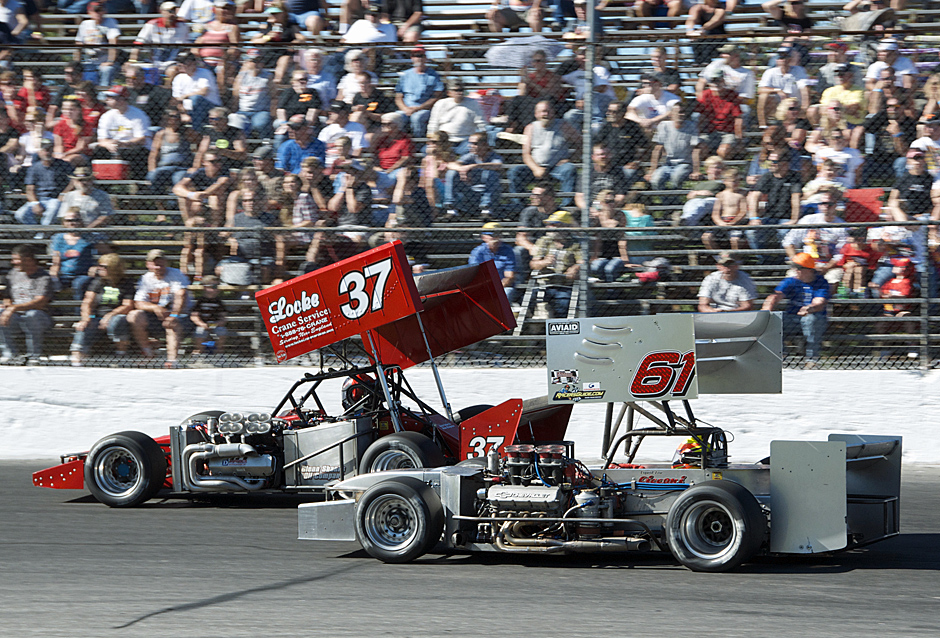 “To win this race three times is awesome,” said Cicconi after the race. “Anytime you win is special. It doesn’t matter if it’s a classic or a win at Oxford Plains. Anytime you win against these guys we’re racing against, it’s special.”

Cicconi, who started from the ninth-position, methodically made his way to the front and began challenging Sammut near the lap 60 mark. After both of the leaders powered under a slower car in turn two, Cicconi shot underneath Sammut on the backstretch to take the lead on lap 70. He would seem to be well on his way to victory before tangling with the lapped car of Dave Duggan on lap 129.

Duggan would spin in turn four as the result of the contact, while Cicconi was sent over the rumble strips. There was visible damage to Cicconi’s Clyde Booth-owned No. 61, but it wouldn’t be enough to get in the way of his third victory of the 2014 ISMA season.

“We messed up the front steering, but it didn’t really have a big effect on the way the car handled,” Cicconi said of the incident. “I was able to hold on and here we are in victory lane. With this win, we have two big wins this year. We have Sundusky (Hy-Miller Nationals) and now we have Star.”

Defending race winner Jon McKennedy would charge from the seventh starting spot to finish in the runner-up position. After the race, McKennedy believed that the difference between racing in the day and racing at night impacted the performance of his car.

“We were just really loose,’ said McKennedy. “I’m a little disappointed. The few years I’ve ran this race it has always been at night time. All my notes were based on the race being at night and this was the first time I’ve run the race during the day. I didn’t have a whole lot to look at for notes.”

The Chelmsford, Mass. driver saw the contact between Cicconi and Duggan happen right in front of him and didn’t know if Cicconi was going to be able to continue.

“I saw them tangle and I thought it was some pretty intense damage,” McKennedy said. “I figured he was done to be honest with you. He had a good car. Congratulations to Lou Cicconi and the whole team. They work hard and they ran a great race. Lou is a great driver and things went right for them today.”

Although he was disappointed that he wasn’t able to repeat in the Star Classic, McKennedy was able to take some positives away from Sunday’s event. Rob Summers, who entered the event two points ahead of McKennedy in the championship standings, was involved in an incident that took him out of the race on lap 95.

McKennedy’s runner-up finish combined with Summers’ misfortune will give him the advantage heading into the final race of the 2014 season at Thompson Speedway Motorsports Park (CT).

“Overall it was a good day I guess,” said McKennedy. “I would have liked to repeat, but we go onto Thompson now with a pretty good point lead. We have a fairly decent lead but I’ve been around racing long enough now that I know anything can happen. We’ll do the best we can and hopefully we can come out on top.”

In his first appearance of the 2014 ISMA season, driving for car owner Howie Lane, Russ Wood, Sr., battled in the top-three for the majority of the event before finishing in the third position. Ben Seitz and Jeff Abold completed the top-five.

In addition to winning the race on Sunday, Lou Cicconi’s 80 laps led were a race high and will earn him the Radical Racegear lap leader award. Cicconi will receive a $100 Radical Racegear product certificate for his performance.

Bobby Chartier, who started shotgun on the field in the 23rd position, made his way to the 14th spot when the checkered flag waved and earned the ISMA Hard Charger Award in honor of Burns Family Racing #17 Supermodified. Justin Belfiore will also receive a hard charger award in memory of SFC Charles T. Briggs, USMC, for charging from the 18th starting spot to finish 10th. Both drivers will receive $100 bonus checks for their performance in the Star Classic.

As is a tradition whenever the ISMA Supermodifieds are in town, a lucky fan in the grandstands on Sunday afternoon took home a free bicycle in the ISMA Free Bike Giveaway presented by Perley’s Marina in Rowley, Mass.

The “Winged Warriors” of the International Supermodified Association will return to action for the final time during the 2014 season during the World Series of Racing on October 18-19 at Thompson Speedway Motorsports Park in Thompson, Connecticut.