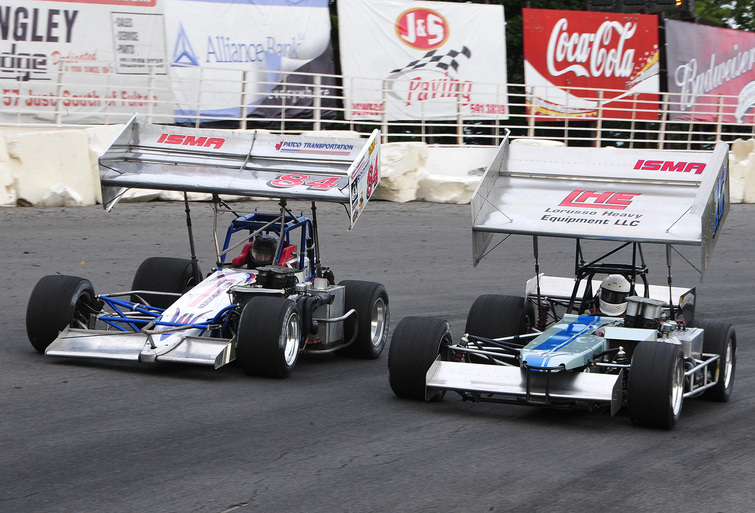 Oswego, NY – After a rain-filled weekend, the clouds finally broke enough at Oswego to begin some racing on Labor Day Monday morning allowing Bourne, MA’s Ben Seitz to claim his first ISMA win. Seitz took the ISMA Bud Light Super Nationals 50 victory after a late race pass of leader Mike Lichty. Seitz started third but lost that spot to Russ Wood in the yellow-plagued first half of the race. With 20 to go, the Richard Bien-owned 17 began moving forward and on lap 44, he and Lichty went side by side as they approached a lap car with Seitz able to take the right line around and the lead with five to go.  Lichty and Jeff Locke trailed Seitz to the checkereds. Seitz, having run at Oswego on many occasions in a NEMA midget, was very proud of this win for his new winged super team.

“This is awesome. Halfway through the race I knew we were going to have a good car, but I wasn’t really expecting to get the win. I saw Lichty getting loose there toward the end. Then I said ‘we might have a shot at this.’ We hit lapped traffic and that was probably the only way I could have passed him. I kind of feel bad for him. The kid has been in second place so many times ready to win. “

“The car didn’t start off that great but it ended up awesome. I am so excited. I lost my voice screaming in the car. We were tight the whole race even at the end. The car was good off. It wasn’t hurting the right rear. I knew the longer the race went, the better we would get. In all the midget races and midget wins, I’ve never won at Oswego. I really wanted to. I’m thrilled. I just want to thank my car owner and sponsors Cape Cod Aggregates, S.M. LoRusso & Sons and LoRusso Heavy Equipment for giving me this opportunity.”

Mike Lichty who began visibly skating off the turns after the Seitz pass, ended up second. “The car was perfect at the beginning but we hurt a tire. My hats off to Ben Seitz. It’s pretty cool to put a new car together for this year and come out and win a huge show like this. Jeff was running great too. We were fortunate enough to get by him in lapped traffic and then the caution came out. We had to keep trying. At times he was much quicker than us and sometimes were at the same speed. Traffic eventually hurt me and Ben got by. We got loose and he didn’t. Hats off to my father and everybody who puts this deal together.”

Second year ISMA competitor Jeff Locke led up until Lichty was able to get by as the duo approached a lap car. Lichty got by and then came Seitz. Locke held the third spot at race end pretty much alone out there ahead of a battling Russ Wood and Mark Sammut.

“ The last ten laps I had to hold on there as the tires went away. I’m happy for Ben Seitz. He’s an awesome guy and an awesome driver. They really have put a good car together. I’d like to thank my father, Richard Witkum, R&R Competition Engines, everybody who has helped put this together for me. It’s unbelievable. We finished every race so far this year and hopefully we can keep that going. This is an incredible crowd considering the weather. Thanks for coming out and sorry for all the cautions there.”

At 9:30 am 26 ISMA supers took to the speedway after a long couple days of weather woes. While Dave Duggan took the point from the start, the race was spotted with yellows for much of the first half. First heat race winner Rich Reid spun the Lehnert 92 with a broken power steering line later found to be the culprit.

The second flag flew for a spin by Bob Magner as multiple pit stops were being made by Andy Noto, Bobby Haynes Jr., Jack Smith and Gene Gibson. Some returned, some did not.

Duggan in his first ever appearance at Oswego was able to fend off the advances of Russ Wood, Jeff Locke, Lichty and Seitz until lap 10 when Locke and Lichty got by.  Wood followed suite, shortly thereafter.

Locke and Lichty took off out front until Jamie Timmons provided the opportunity for Lichty to take the lead but a yellow for Bob Dawson negated the pass. Timmons was hooked in this one too.

A red was thrown on lap 18 as the cleanup of the 27 and 28 ensued. Back under way, yellow flew again for the second Craig Reed car, the 8 driven by Shullick Jr.  Then the 51 of Duggan brought out the yellow, just before the third Reed car was into the water barrels in the back straight. It was not a good day for that team.

The race finally got moving just past the lap 20 mark, as Locke took off trailed by Lichty, Seitz, Wood and Michael Barnes in the Morton 70. Another yellow on lap 29 gave Lichty the lead as he passed by Locke who was trying to get by the 51.

With 20 to go, 12 cars remained on the track. The order as the clocked ticked to 30 was Lichty, Seitz, Locke, Wood, Barnes and Charlie Shultz. Coming alive behind was Mark Sammut whose 78 began picking off cars in the top ten. By lap 35 Sammut was sixth behind the Lichty, Seitz, Locke Wood and Barnes train.

With ten to go, Lichty had a good lead but it was apparent that Seitz was catching up. Locke ran solo in third with Wood fourth and Sammut now fifth.

Lap 43 saw some traffic ahead of the leaders and by lap 44, Lichty and Seitz were side by side behind Brandon Bellinger with Seitz taking the advantage this time. Seitz took off as Lichty drifted a little backwards with obvious tire loss. Locke, Sammut and Wood would finish up the top five with Sammut taking fourth with four to go.

Mark Sammut said of his late race charge to fourth. “The car was really good at the end. Unfortunately I didn’t get her going in the heats and missed the handicap. We probably had as good a car as anybody at the end. I’m a little disappointed I didn’t get a little closer. We’re happy with the car after rebuilding it after Delaware. It worked good all weekend. We’ll be able to go to Lee next weekend and give it another shot there.”

Russ Wood eked out a fifth place despite a loose 29.  “Our car was fast at the beginning and then it started pushing about mid-race. With 20 to go we were severely loose. The car really changed throughout the race. I don’t know what happened. Those guys up front were really fast. Congratulations to Mike, Ben and Jeff. They were really ran a good race. It’s too bad this wasn’t the greatest race but thanks to the fans for being here. Now we get to run the Classic.”

Time Trials scratched due to weather and time constraints