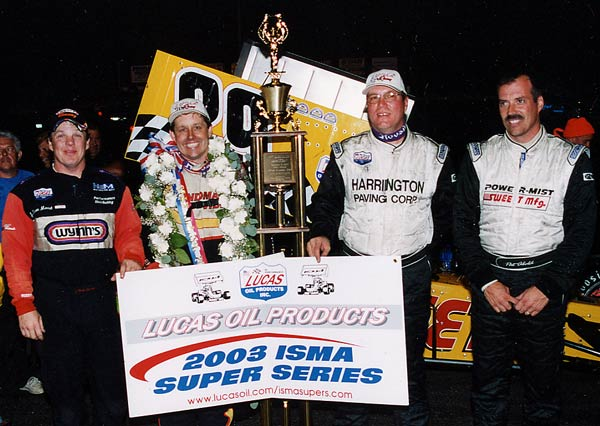 Epping, NH – Russ Wood remembers well that his racing roots go back to Star Speedway some twenty years ago. Saturday night at the 38th Star Classic, Wood once again proved that his early learning experiences at the Epping bullring have helped him grow into the talented driver he is today. After setting fast time, he was handicapped to a fourth place starting spot in the 24-car field in the ISMA-Lucas Oil Super Series event. The defending champion of the 200-lap grind was basically right where he wanted to be at the start of the race and at the finish.

Moving by Joe Petro on lap three, Wood was in the lead as the clock ticked to four. His only challenger along the way to victory came from another past Classic winner who was a guy who spent much of his early days on the same track, Mike Ordway. The 2003 Oswego Classic winner grabbed the top spot from Wood on lap 88 and over the next ten laps, the neighborhood boys played a game of tag until Wood came back out on top for good at the midway mark.

After winning his fourth Star Classic of his career – a mark that tied him with the legendary Ollie Silva, Wood commented on his race. “I started up near the front,” said the Pelham, NH driver. ” All the fast guys were behind me. So I didn’t think I had much choice but to set a pretty good pace because if the fast guys got back by me, it would be hard to get back by them later. The car felt really good. I wasn’t using up the tires too hard so I just set my own pace. When Mike got by me I wasn’t too worried about it because the car still felt good and I got the opportunity to get him back. I figured he’d come back by me after I got him, but he never did. I think traffic worked out pretty well for me and I was able to put a couple cars between him and me towards the end. The car got a little loose there coming off four, but I was able to regroup. I felt sure someone would pass me at that point. I was kind of surprised Mike didn’t get by there. I thought I heard him back there. I knew he was pretty tough but I’m glad it worked out the way it did.”

Ordway was quite content with a first at Oswego’s Classic and a second at the Star Classic. . “This great … not bad at all. A first at Oswego and a second at Star. It’s really great. The car ran pretty good. I just used the tires up a little bit. I just couldn’t get him at the end in traffic. I just wasn’t close enough. He made a mistake over there, but I just wasn’t close enough to get him. But, he knew I was there. We had a good run. We’re happy.”

The exciting move of the race came off the fourth turn of the last lap after Wood and Ordway had crossed under the checkered a distance behind the third and fourth place runners Pat Abold and Scott Martel. As Abold came off four, a lap car slowed in front of him abruptly and Martel shot alongside for what would be a photo finish and an eventual tie. After much reviewing and discussion, ISMA scorers and officials determined a tie to be called with points and money split equally between the two drivers.

Said Abold after the determination, “Third, second, whatever. It was the same thing again. I got a little bit loose towards the end. It’s getting to the point now where I’m getting hungry to win a race. But, it’s still top threes. It’s consistent finishes. The team won the race and that’s what we came to do. So, I’m still happy. Traffic didn’t bother me. The deal at the end came when the 88 let off the gas before the checkered flag and I had to let off or I would have run him over. There might not have been a tie had it not been for that.”

And, Martel had this to say about the exciting finish “A third and a half I guess. I’m happy with that. We struggled with the handling in the beginning of the race. Then the car seemed to come on. It didn’t deteriorate as bad as the other guys did. I was able to come on strong at the end. It’s the Star

Classic and all my hometown fans are here. All my sponsors were here. We are the little guy and we keep coming back. It just goes to show how hard my guys work on the car when a team like us can go out and compete against the big guys. I’m just happy to drive the car for all of those guys. I was surprised with the end. Pat got up on top and the car in front of him really slowed. I thought I might have had it, but they reviewed it and I respect their decision. We’ll take third and a half and go to Seekonk. If we can stay out of trouble, I think we can contend for the win. Maybe we’ll get one for the little guys out there.”

Finishing fifth, one lap down, was Joey Payne in a car just purchased for him prior to the Oswego Classic. “I’m happy with this,” said Payne afterwards. “Fifth isn’t great but at Star it’s good. We were good at the beginning. We set the car real tight. About lap 100 it got loose and we gained about an inch and a half of stagger. We didn’t have a side cell on the car and we knew the fuel would be close. I started to run out with about five to go. I was trying to conserve but it got the best of us. These guys on the team are ecstatic. This is just another race to me. I’ve got to thank George Pynn Masonry because without him I wouldn’t be here tonight. We can’t make Seekonk, but we’ll be at Thompson to try again.”

Eric Lewis and Joe Petro led the 24-car starting field to the green with Wood claiming the lead by lap four. Petro stayed right there in second until a lap 21 yellow found him tangling with Brian Sweeney with both spinning, but able to restart.

Wood found Ordway right on his tail when the race resumed and that duo took off as Eric Lewis, Pat Abold, Randy Ritskes and John Payne chased. Lewis was the next yellow victim as his 28 flew off the third turn bank and landed in the trees on lap 42.

With Lewis extricated from the woods, another Wood was in command out front. Ordway, Abold, Ritskes and John Payne were in line as Dave McKnight, Joey Payne, Scott Martel and Greg Furlong moved into the top ten.

Russ stormed around the quarter-mile putting cars in between his 29 and that of his challenger Ordway. On lap 79, Russ put Chris Perley, his nemesis in the ISMA point chase, down a lap. But working traffic along with him was Ordway and on lap 88 Ordway had snuck by Wood on the low side for the lead. Wood grabbed the lead back as the two diced in between the slower cars and Ordway

took it back again soon thereafter. But, just prior to the 100 lap mark, Wood was the man out front. He would not relinquish the position again.

The torrid pace slowed on lap 112 when the 88 of John Payne spun just after Dave McKnight had moved into fourth past Randy Ritskes.

Unfortunately for McKnight, the next yellow that came on lap 129 was for him. McKnight tried in vain to keep the 94 moving, but he finally gave up in the infield heading toward turn four.

Wood was only able to manage four green flag laps after the lap 135 restart before the flag flew again for McKnight’s car owner Brad Lichty.

Green fell again on lap 147 and this time Wood was able to pull away from Ordway and Abold as Joey Payne held fourth with Martel, Ritskes and Furlong right behind.

Wood was back into heavy traffic not long after and he got caught up by it as Ordway moved in on him as did Abold, but Russ wasted no time melding back into traffic and losing his challengers.

Lap 167 saw Mark Sammut stop out front with just a push needed to get him going. There was less than 30 to go when the race resumed and Wood was easily pulling away from the 61 as he moved up on Ritskes and Furlong to put them both down by lap 188. It was becoming evident that this race was Woods to lose and he wasn’t about to do that.

With five to go Russ had some cars between he and Ordway as Abold, Martel and Joey Payne and only the move by Martel changed the ending.

With Wood and Ordway solidly in the books, Martel made the bonsai move on Abold as the two crossed under the flag with a tie to result. They were the last two cars in the lead lap. Joey Payne finished up the top five with Furlong, Ritskes, Joe Gosek, Bentley Warren and Chris Perley the top ten.