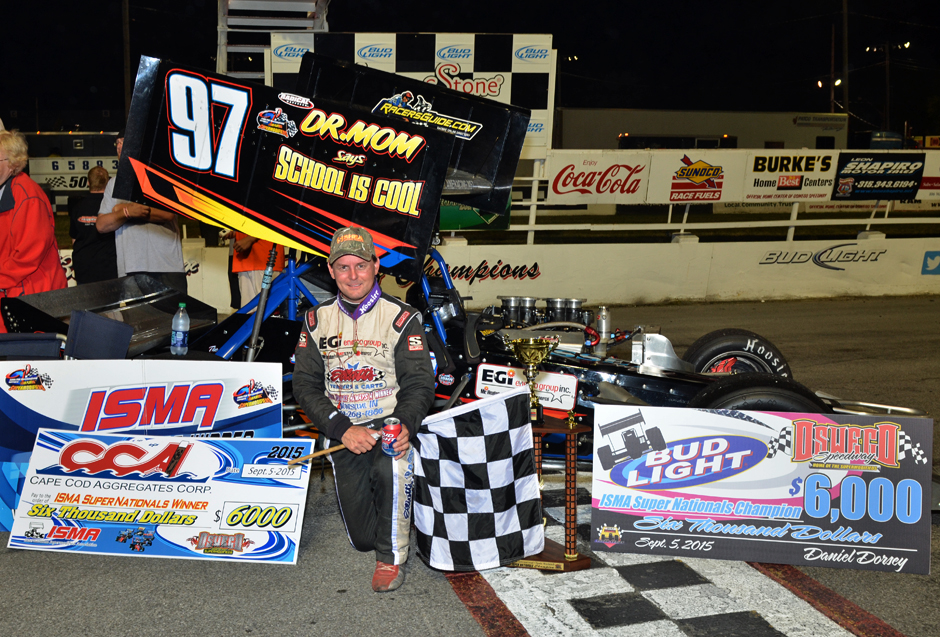 Oswego, NY – The day at Oswego Speedway did not start out well for Timmy Jedrzejek and the Lane Racing team when they blew a rear end in practice. They almost called it quits, but instead the team went to work and got the car repaired in time to take the last time trial of the afternoon. From there it was on to a second place in a heat and a sixth place starting spot in the the 22nd annual Oswego Speedway Super Nationals 60, after which Jedrzejek would come home with his third win in the prestigious event. The win brought his Oswego Speedway winged career feature win mark up to six and was worth $6,000.

The Independence, Ohio driver replayed his exciting road to victory.

“What a race. I don’t know how long it took us to go from sixth to the lead, maybe twenty laps. But I knew Mikey was coming up through as fast as I did and I knew he was there. We ran some more laps and I said, okay he’s not too close to my bumper. I got down there in lap traffic and the slow cars slid up a little bit and there there goes Mikey. I said damn, now I’m running for second. And then I just started to stay with him. He’d get me by two-three car lengths and just started maintaining that. I knew we were still in the game. I said there’s 30 laps or so to go. The cautions came out and then the reds came out. That always changes the race a little bit. Mikey and I were so evenly matched. He might have been a tick faster on some laps and I might have been a tick faster on other laps. I was able to get a couple good runs on him on restart, coming off four and shutting underneath him and I’d get almost up to him but he drove in so deep into one, which Mikey always does here. His car just does that here and he’s able to hold it in there. It just wasn’t enough to make me feel he knew I was there. He never saw me and that’s why I got out of there. I did have a couple of those good runs and at that point I thought maybe we can get another shot at him. The lap traffic was what made it happen.

“I saw on the board that there were six laps to go and there was a line of lap traffic in front of us. I said this was my only shot I had at this. What happened was the same kind of thing. Mikey went down into one on the outside of a lap car and the lap car slipped up. I went by on the bottom. We were all banging wheels coming out of two and half way down the backstretch. Nobody lifted and we made it around. I came around and saw the white flag and said wow, if I can hold on for one more lap, we have this. It was amazing. My hats off to Mikey. We’ve raced so much side by side this year and in previous years when I was in the 32 and like I told him, it’s always fun and a joy to race with him. I knew it wasn’t fun for him tonight, but it is usually fun and we respect each other so well.

“We have an amazing team here. Dr Mom and School I Cool and all the other backers on this team, Enerco/Mr. Heater and more. The team never gave up today. We blew a rear end in practice and over revved the motor. We made the first call that we were done for the day, but the crew didn’t accept that and just never gave up. They rebuilt the rear end and changed valve springs in the motor and it was a gamble. A lot of times those things don’t work out so good. I really appreciate everything and the equipment they gave me today to drive. It’s really a joy to be around this team.”

Lichty’s comments were short and to the point. He felt a slower car might have cost him his fifth Oswego career win. He described his loss of the lead near race end. “I got up along side of him in one, showed him a wheel, he didn’t give me any room and he drove me into the fence. And, I lost a race. Hats off to Timmy. I have a lot of respect of Timmy as a driver. It was also a great run for DJ, coming from the back of the pack. But, I thought it was our race. I have to thank everybody at Reed’s Salvage, Patco Transportation, Level Performance and Hoosier Tire East.

ISMA point leader Dave Shullick did not have a great day either after a wreck in time trials. He was quite satisfied with his third place finish. “After the day we’ve had and starting dead last in the feature, I’d have to say I’m happy with a third place. It took some work by everyone to get us here. It was a good run for us and congrats to Timmy J on the win.”

Alison Cumens and Danny Bowes led the 23-car field to green, after attrition had pared down the car count by four going into the 60-lap feature, and it was Bowes taking the point. The Byfield, Mass. driver held onto the point for 11 laps before Timmy Jedrzejek moved in to take over leaving Bowes, Cumens, Mark Sammut, Mike Lichty and Chris Perley the nearest challengers.

Red fell on lap 14 when the 74 of Rob Summers came off turn four in a ball of flames and headed to the pits. The incident left the track safety crew to lay down a lot of speedy dry and ironically, while sitting on the track waiting, the 46 of Ryan Coniam was also seen to be smoking and off he went into the pits. Pitting in the interim were Mark Sammut, Dave McKnight and Kevin Jaycox, who would not return.

Back underway, it was Jedrzejek, Bowes and Lichty next up with Perley moving into fourth by Cumens.

Timmy J began to built up a healthy lead but Lichty was on the move and by lap 20 he had Jedrzejek in his sites. Bowes ran third with Perley and Cumens the top five. Trent Stephens, Dave Shullick, Eddie Witkum, Jeff Locke and Tim Ice ran in the top ten.

But, as the 97 began to lap tail end cars, Lichty was able to use those same cars to wrest the lead from Timmy J on lap 24 and he began to build up some distance over the 97 and the 95 of Shullick.

Unfortunately, red fell again just before the halfway mark when the 39 of Cumens blew up, causing her to leap out of the car to avoid hot liquids and causing several cars to slide around in turn one. Called in on this cleanup were the 65 of Tim Ice and the 27 of Jamie Timmons., neither of whom would restart.

Lichty was able to pull away from the 97 of Jedrzejek on the restart but only by a car length or two. The 72 of Eric Shirey, a lap car, sat between the 97 and the 95 of Shullick as Bowes held off Perley. Stephens, Witkum, Jeff Locke, Dan Shirey, Ben Seitz, McKnight and Sammut were the on-track remnants of the increasing attrition.

Lichty led the way to lap 35, when yellow fell again, this time for the 37 of Jeff Locke which hit in turn three. The car was flat-bedded off the speedway.

Jedrzejek was able to make one of his runs at Lichty on this restart, but it did not stick and the race was on to a long green streak. Lichty, Jedrzejek and Shullick remained the top three as Trent Stevens was able to sneak by the battling Bowes and Perley, for fourth.

With ten to go, it looked like Lichty was about to take his second win of the season. But as Jedrzejek described above, lap traffic was about to play the game changer when with 3 to go, the 84 and 97 ran up on the 49 of Shirey and as they did, Jedrzejek made the move for the lead as Lichty lost ground passing the 49.

Jedrzejek came across for the victory with Lichty and Shullick copping podium finishes. Trent Stephens held onto the fourth place spot with Chris Perley 8-time winged winner at Oswego, with the majority of the total coming at the Super Nationals, in fifth

Stephens, experiencing an up and down season, liked his fourth place. “I actually had a really good run. This is the first time in a while at Oswego that I had a really good car. It wasn’t very good during the day but we kept working on it. It turned out to be a pretty good race car then. Starting fourteenth and getting up to fourth is something I’m pretty happy with. That probably by far one of the better races we’ve had this year. This is two good runs in a row so hopefully we can keep going from here . I’ve got to thank all my sponsors, Kasper Auto Group, PPG, Shaefer’s Racing Oil, Real Wheels, Landom Springs, and my entire crew. The season has been rough on them.”

Perley, struggling of late to get that first win of the season, commented, “This was good, I was really happy to finish fifth. I have nobody to blame but myself. The crew worked really hard on the car and we got some speed back today, but I still can’t race anyone. I still can’t pass anyone. Maybe I’m too old! When I finally got by the 25 I could check out and be gone. But when I’m behind somebody and I’m running slower, the car is loose. When I spun out there it was nice to get my spot back. I saw the fireball (the 74) down there and I didn’t know what I was seeing. When it came over the radio, I checked up and spun. There was a lot of oil on the track already before that. There seemed to be a lot of cars dumping oil. Everything on the car is covered. I wish we could have run good at one of these Oswego races for Ed (Shea). They (Hoosier) came out with a little different rear tire and it seemed there was more passing out there tonight. But, I’m just going to keep plugging until we figure it out. It’s on to Star.”