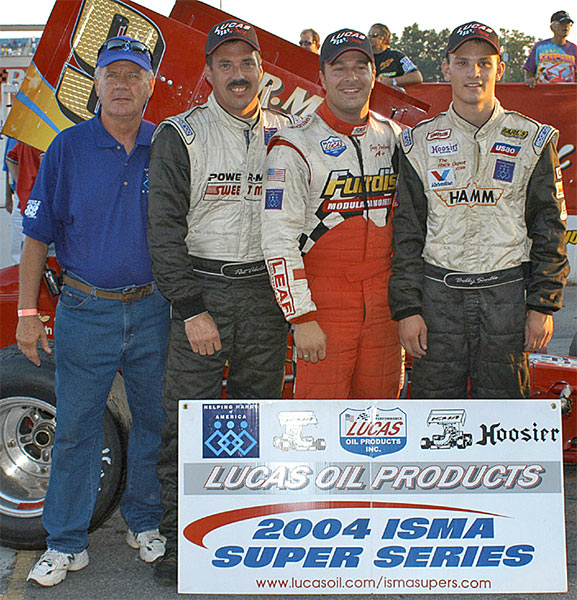 Oswego, NY – Eighteen-year old Bobby Santos of Franklin, Mass. has been jumping back and forth between different divisions and different cars this season. Santos likes the variety as he prepares for his future in racing. Saturday at Oswego Speedway Santos jumped from his NEMA midget ride into the Howie Lane owned number 9 supermodified as part of a triple-duty driving weekend and went from his fourth place starting spot to a win over some of supermodified’s best!

Santos inherited the race lead from a high-flying Justin Belfiore when Belfiore’s mount blew a motor just 17 laps shy of what would have been his second career ISMA win. Santos survived pressure from first Lou Cicconi and then defending race champion Greg Furlong for the next 16 circuits to capture one of supermodified racing’s big prizes. And he did it like a seasoned veteran, playing traffic, despite his relatively short time in the powerful supermodifieds. The 50-lap Super Nationals event paid $6,000 to win for the Lane team. The young driver had praise for his crew and his challenger at race end.

“I’d like to thank all the guys on my crew,” said Bob. “ I’ve also got to thank Greg. He looked like the fastest car at the end but I want to thank him for running me clean. He could have beaten me if he really wanted to. But he raced me clean, and again I thank him for that. I tried to use the lap cars to my advantage because I knew someone behind me was faster. I tried to keep the lap cars beside me as along as I could. I was trying to buy some time each lap. It worked at the end.”

Furlong, who had a long road ahead at the start, indicated at the end, “I told the guys to give me the car I had in May when I made that pit stop and started coming up through. That’s exactly the car they gave me. I think I started 15th and the car was a rocket ship. Coming up through I tapped one guy lightly – I think it was Gosek – and I bent up the front nose wing. It was straight up and down. That killed all the down force. The car started pushing. I thought maybe I could get him in traffic but we have to race this car tomorrow and I figured second place is better than a 24th so we’ll take the second.”

Eighth place starter Pat Abold was pleased with his third place finish. – “It wasn’t a bad third place run. It was a fast paced race tonight. The car was good in the long run. I actually got a little loose on entry and I started to fade a little bit. The caution came out there and cooled the tires a little bit. Then it was really tight for about five or six laps and I couldn’t get through the middle of the corner. Then in our run after that it got really good. It was really dangerous going into one tonight at those speeds. For about one or two hundred feet there going into one you could not see anything. You couldn’t have seen a wreck in front of you.”

The competitive ISMA 50 lapper began with Eric Shirey taking the early lead and with continuous green ahead, Shirey took his V2 to a commanding lead, which began to be whittled down by the 9 of Santos and the 8 of Justin Belfiore. Just before the halfway mark of the fast-paced race, Belfiore came off four and put both Santos and Shirey into runner-up spots as the number 8 took over the lead in one swoop.

Belfiore took off in pursuit of his second ISMA win leaving Santos in second. Shirey who had developed a bad vibration in the rear end, began a backward slide while Lou Cicconi, Pat Abold, Joe Gosek Mike Lichty, Furlong, Bentley Warren, Russ Wood and Chris Perley were all hot on the trail.

With twenty to go it was Belfiore, Santo, Cicconi, Abold and Lichty in the top five. One lap later, Belfiore pulled off turn four and into the pits with a blown motor. As Justin said afterwards, “this motor which is an old Bellinger motor has the power, more power than my other motor. I have led four times with it. One time I won.”

The one and only caution of the torrid feature fell on lap 33 for a minor incident involving Dave McKnight which also saw Santos’ teammate Kyle Carpenter heading pitside. Mike Lichty’s 84 was stopped here with a bad overheating problem and he too pitted. The second half of the Lichty team, Dave McKnight finished his race for the day with an ill handling car.

With sixteen laps left, Santos had Lou Cicconi and Greg Furlong bearing down on him on the restart, but Bobby pulled away from Cicconi at the green. Furlong soon got by Cicconi who was losing tire and contracting a motor problem at the same time. It was now the Santos-Furlong show out front as Cicconi held a precarious third. Abold soon took over third on lap 46 with Cicconi trying to hold on.

Traffic, as Santos had said, was his friend as he heard Furlong’s thunder behind. Abold was soon joined by Russ Wood and Joe Gosek as Cicconi fell back in the waning laps. Chris Perley tried to move by Gosek to no avail as time ran out on the race.

Wood was more than happy with fourth. Said Russ, who had won a heat earlier, “We ended up fourth. We were a little too tight. I stopped using the brakes and it stopped pushing. Some guys were slowing down there at the end and we picked up a few spots in the last couple laps. It wasn’t too bad a weekend. Pat was third and I was fourth.”

And, Joe Gosek, driving the May 77, was also satisfied with a fifth. “We’re really happy with fifth,” said Joe. “Everybody worked hard on the car. We really struggled most of the day. We weren’t really one of the fastest cars. We made some changes for the main because we had blistered a tire in the heat finishing second. In the main we sort of started fifth and finished fifth. It was tough out there. It was a good run for us. There were a lot of green flag laps. As I said we had struggled and we’re just happy to come away with a top five. There were a lot of good cars around me – Abold, Cicconi, Woody, Perley and they were still there at the end.”

Bentley Warren, who brought the Dunigan Racing 25 home in 8th, picked up an extra $588 from the Jim Shampine Memorial fund.