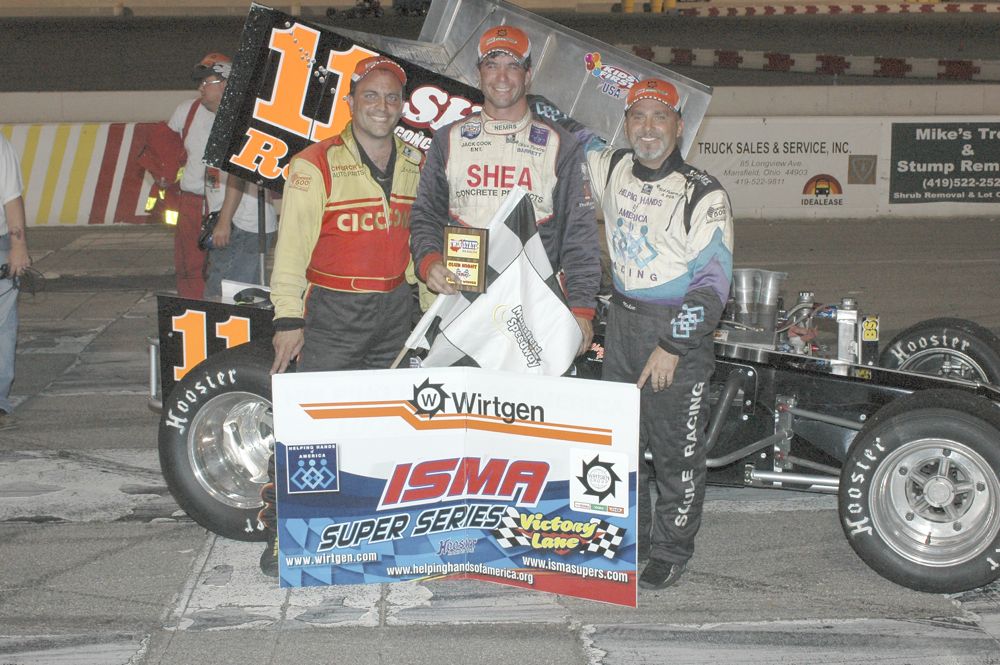 Marne, Mich. – Chris Perley’s team rolled the dice Saturday night and took a big gamble. They knew it was going to rain so they set up the Vic Miller-owned 11 for 25, maybe 35, good laps. And, when the rain fell, it fell exactly on lap 25. Perley, who had shot to the front from 12th starting spot, and had passed leader Nokie Fornoro in an incredible move on lap 16, was declared the winner. The victory clinched the ISMA-Wirtgen championship title for the team, their third in four years. Once again the luck had fallen their way in their record-setting season. Perley had some quick comments as the rains began to fall harder.

“The crew gave me a 25-lap car tonight. We figured the rain was coming. They said ‘get to the front as fast as you can’ and I did. Honestly, after I got by Nokie, the car was getting looser and looser and looser. If the race had gone on, it probably wouldn’t have worked. It was probably a 35-lap car at best. I can’t believe we won the championship with this win. This is awesome. Now it’s on to Thompson with two cars and Bentley for the last race and some fun.”

Repeating his finish of Friday night at Delaware, Nokie Fornoro pulled into victory circle in second and exclaimed “We’ve got to stop doing this!” as Lou Cicconi also pulled up behind with his second straight third place. Nokie, who was leading when Perley swooped under a car Fornoro was passing high to steal the lead, commented “I’m not happy with second tonight because we did have a winning car which we did have last night too. I was cruising and Chris surprised me in lap traffic there. When he got by I got boxed again for another lap. When I got free I started running him down but by then he was in the middle of lapped traffic and then the rains came. But, he was loose off turn two and he knows that he was. He said he had a 25-lap car but I had a 50-lap car. But I’m happy. Everybody’s safe and we all had a good weekend again. Congratulations to the Miller team and to the great fans who turned out despite the threat of bad weather.”

Cicconi, who had to battle by early leader Dave McKnight for third, described his run to third, “There isn’t much to say. I knew it was going to rain. I wanted to get up front right away. I accidentally screwed up Justin Belfiore… I hope he’s not mad at me. It was a good run, but what are you going to do. We all knew the rain was coming.”

The weather appeared to be a big factor at Berlin Raceway on Saturday as rain was forecast to be passing through the state of Michigan all day. But, after a brief morning shower and one later on in the afternoon, sun broke out of the clouds and blue sky shown through. This gave everyone false hopes that the show would be completed albeit a little later than expected. The ISMA competitors waited through the other divisions qualifying and prepared for their heat races. Unfortunately, the weather came back and lightning began to flash over the first turn grandstand. It was decided that the heats be scrapped and the 50-lap feature be lined up and run. Only 20 cars remained from the previous night’s Delaware event.

At approximately 9 pm Joe Petro and Mark Sammut led the shorter than normal field down to green with yellow flying before the first circuit was complete. Justin Belfiore and Bill Tyler, driving the Bennett 63, were pushed away to the tail while Joe Petro, whose crew had worked laboriously all afternoon replacing a rear end, pitted quickly but did not make the restart green.

Dave McKnight, hungry for a win in a rather dismal season, grabbed the front spot from Sammut and ran off and hid trailed by Sammut, Bob Magner, Tom Hessert, Nokie Fornoro, Lou Cicconi, Mike Lichty and Chris Perley.

McKnight lengthened his lead as Fornoro, Perley and Cicconi were moving up quickly through the pack. On lap 7, the field bunched after Danny Shirey’s front end broke on the V2 and the car had to be cradled off the track.

At the restart, McKnight once again took off while Nokie Fornoro had worked his way past Magner for second. Perley and Cicconi battled by Magner soon thereafter and along with Fornoro, began to chase McKnight.

By lap ten, McKnight began to slip backwards and on lap 11 Fornoro had moved by the former ISMA champ for the lead. By lap 13 Perley had broken by McKnight to put the 11 on Fornoro’s tail.

On lap 16 the two front-runners came up on Jeff Holbrook driving the 70. Fornoro took a high pass around Holbrook and all of a sudden he looked down the track and saw Perley shooting underneath both of them for the lead in a move that had the crowd on their feet. Fornoro bogged behind Holbrook for a lap and then cleared to chase Perley. He was gaining as Cicconi now got by the lap car leaving McKnight, Tom Hessert, Michael Lewis, Magner, Sammut and Lichty dicing for spots behind.

As the lead pack crossed over the line for the halfway mark yellow flew for the rain that had begun to fall once again. Reports of severe thunderstorms in the area brought the decision to call the race complete. Perley, Fornoro and Cicconi were once again the top three with McKnight and Hessert, in only his second time in a super, were fourth and fifth respectively.

Said McKnight of his fourth place finish after a horrendous night in his native Canada the night before, “The Patco Transportation-Stage Door team is struggling this year. We’ve had some good runs but today just wasn’t one of them. I had a good racecar but unfortunately missed the tires stagger by an inch and that hurt us in the long run. In the early going the car was just awesome. Hats off to the guys getting the rear end back in it. But, it’s just one of those years we’re having so we’ll just go to Thompson and see if we can’t at least get one in the bank before the season closes.”

And New Jersey’s Hessert, who was doing double-duty in the midgets and supers, was more than pleased with a fifth in his second outing. “I had a blast running the super. Howie Lane gave me a chance to come out and run one. I had a good time and for the second night in it a fifth is pretty good. It was a good night. I think we could have run a little further up. I absolutely had a blast. The cars are fun to drive.”

Michael Lewis, Hessert’s teammate in the Lane 97, was sixth. Followed by Bob Magner, Sammut, Mike Lichty and Mike Ordway for the top ten.

No heats were run due to weather.

John Benson Jr. had fast time in practice runs in his first time in a supermodified.