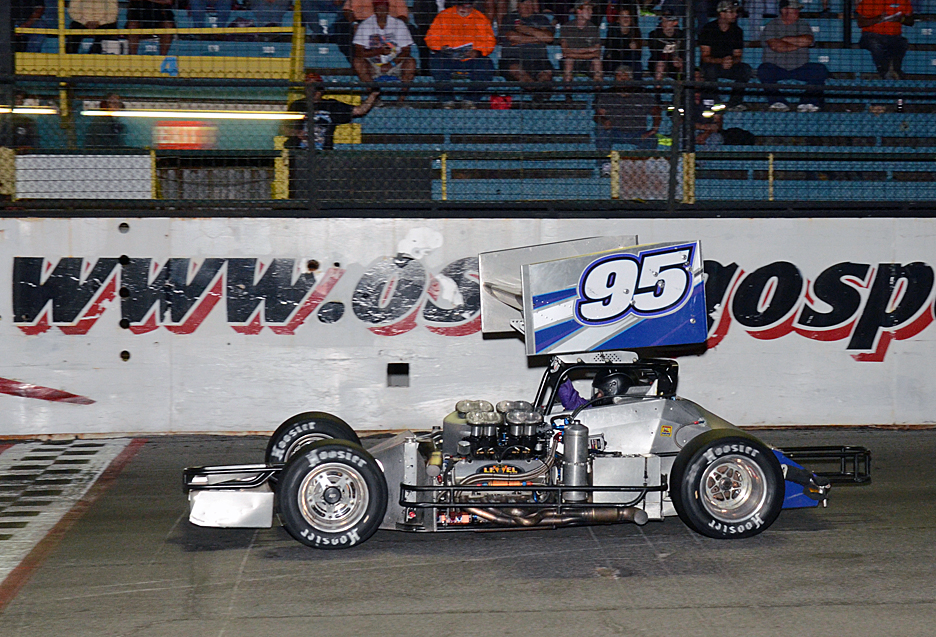 Oswego, NY – Dave Shullick Jr. has been in an up and down battle with Mike Lichty for the 2016 ISMA point title most of the season. At Delaware Speedway on Aug. 19, Shullick lost the point lead to Mike Lichty when Lichty won the event and Shoe II finished down the line in 15th. Saturday night at Oswego Speedway the roles reversed as Lichty suffered a broken torque arm ladder in his heat while Shullick went on to grab the lead of the Bud Light SuperNationals from Tim Jedrzejek on lap 39 and took the win.

Lichty had tried to start the 60-lapper but failed, crediting the 84 with last place. For Shullick Jr. it was his third win in the Classic weekend event, and sixth victory overall in Oswego winged competition. The win was Shullick’s 19th career win in ISMA, his fifth this season and moved into sole possession of the seventh spot on the ISMA All-Time win list.

Said the North Ridgeville, Ohio driver after his win, “It was a good race. Early we were really tight. I was just waiting for the car to free up a little bit. Timmy looked like he got a little loose and we were able to capitalize and get underneath him. With Timmy behind me knowing he has had some heroics here in the past with Mike, I knew he’s good at pulling one off. You have to think about that. So we just had to give it all we had, especially on those restarts, one after another, after another. I just tried to be flawless as much as we could. Fortunately it worked out for us tonight. When we had that red I was really concerned about the car vapor locking. It hasn’t vapor locked, but it happened to Otto at the Hy-Miler. I was thinking about the whole time. I was hoping it would restart and I was very happy when it did. It was a good race overall and any time you can win here at Oswego is pretty special; awesome.”

(Note: Sunday at Oswego Classic Shullick almost pulled of an unprecedented sweep until he ran out of fuel on the last lap)

Jedrzejek, who holds three SuperNationals titles himself, was aware that Shullick was coming up to challenge for the lead he had held since the lap 20 mark. “It was a good second. Congrats to DJ and the team. They obviously had a really great team tonight. I thought the car was really loose the first five or six laps and then I felt the comfort zone so I started attacking the top five cars and got the lead. When I got to clean air it was like a different day. I started going and the car was perfect. Once I got to that dirty in traffic again, I wasn’t so good. I just couldn’t maneuver the way I wanted to. DJ showed me a nose and he got up next to me. I couldn’t do much at that point. I was hanging on, pretty loose and I was pedaling it pretty good just trying to keep it straight at times. There’s only so much you can do. You have to salvage something out of it and I just had to back off and pick the traffic a little gently and get second place.

“Again, I am proud of my team. They gave me a helluva good car. They worked hard today. We qualified well. That’s the first time I’ve gotten in the 14 second bracket. Now I’m part of the 14 second club, which I think only consists of DJ and Mike maybe. So, the whole team did great. And, the whole Dr. Mom Says School is Cool, Essex Seafood, Enerco-Mr Heater had just a really good day — no hiccups, no problems and smooth. We’ll take a second and go on to tomorrow. We have a pretty good piece with the Danzer car. I’m looking forward to it. It was my first time in the car yesterday and it felt pretty good.” (Note: Jedrzejek had mechanical problems in the Classic finishing 26th)

Both the winner and second place drivers competed in the prestigious 60th running of Oswego’s International Classic 200 the next day.

Mike Ordway Jr., proved he was becoming a definite challenger in his Clyde Booth 61 ride and continued to pick up another third place in the race.

“We’re on a roll. We’re still gaining on it here. Clyde has struggled here in the past with the wing. I haven’t raced here much with or without the wing so we’re gaining together. We’ll just see if we can come back in the spring and do it again.”

Ben Seitz, a SuperNationals winner in 2010 and Trent Stephens, the 2016 King of Wings winner formed a formidable front row to start the 23rd Annual Bud Light SuperNationals and it was Seitz taking off with the point but Stephens, Moe Lilje, Mark Sammut and Timmy Jedrzejek were right there.

On lap 9 Stephens got alongside of Seitz and took over out front. And took off only to have bad luck strike again when on lap 15 a simple bolt broke on the right front slowing the 19 and bringing his hopes of a third career Oswego win to an end.

Seitz took back the lead now as Lilje, Jedrzejek, Shullick, Sammut, Dan Bowes, Rob Summers, who had just finished fourth in his Whelen Modified Tour ride, Dave McKnight and Mike McVetta were bunched behind in the top ten.

Jedrzejek was soon tacked on the 17’s rear bumper and on lap 20, Timmy J took Seitz’s lead away. The 97 only had a lap to gain some ground on Shullick who had moved into second, when Alison Cumens flew the first yellow with a spin in turn 4. The 39 had not made contact and restarted.

On the restart Jedrzejek held off Shullick as Seitz, Lilje, Sammut, Ordway, Kyle Edwards, Bowes, McKnight and McVetta were the top ten runners.

The race out front soon became a solo battle between Timmy J, still benefitting from the clean air, and Shullick. But soon the two speedsters began to approach the tail of the field as Seitz, Lilje and Ordway ran nose to tail a distance behind

On lap 39 Shullick maneuvered his 95 around the 97 and stole the lead from Timmy J off four to take the point, also putting a lap car cushion in between the two front runners.

Shullick began to encounter more slower cars as the race ran clean green, with Jedrzejek staying in contention while Seitz, Ordway Jr. and Lilje put on a classic battle for third. Ordway would move into third on lap 46, leaving Seitz trying to hold off Lilje, who relinquished the fourth spot to the 76 by lap 53.

Shullick had a healthy lead out front until a trio of yellows disrupted his momentum. First on lap 56 yellow flew from the 23 of Jason Spaulding. Then another fell one lap later when Mark Sammut spun. Mark, thinking he might have had a tire going down but with only 3 laps to go, he continued. Unfortunately, the tire was actually coming off, so green fell, followed by another yellow with Sammut around on the front stretch. This time he was done. Kyle Edwards also left a top ten spot when his 11 would not fire after being pushed onto the track.

The race finally resumed with Shullick flying under the checkers two laps later trailed by Jedrzejek and Ordway in the top three. Lilje and veteran McKnight finished up the top five.

Lilje, who calls himself the rent-a-driver, having subbed in the 74 and 76 during the season when needed, may have found a permanent ride in the 76 with another top five finish.

Said the Vickery, Ohio driver, “It was a good run for us. The way the race started we were really free on exit and I thought we were going to back up a lot. And we lost a spot to Timmy and DJ after Trent dropped out. And they were both really good. Then I fought with Ben a little and couldn’t quite get him. Then I lost a spot to Mikey and ended up getting Ben finally. We stayed there in fourth. The car kind of came around and snugged up around lap 25 a little bit so it was manageable. I knew at that point we weren’t going to be dropping like a rock. To come home fourth, we’re happy!”

McKnight, the veteran of many a Classic weekend, was a little disappointed in fifth. “It was an average run. We struggled all day. We broke the front rotors in qualifying which hurt us a little. But, the car was consistent. We set it up to free up in the race and Gary missed it again. But hey, all in all it was a good run. We have the car in one piece. Now we’ll get it all switched around and see what we have for tomorrow in the Classic.” He was another of the winged warriors to be running wingless cars in the Classic but perhaps the only one using the same car.