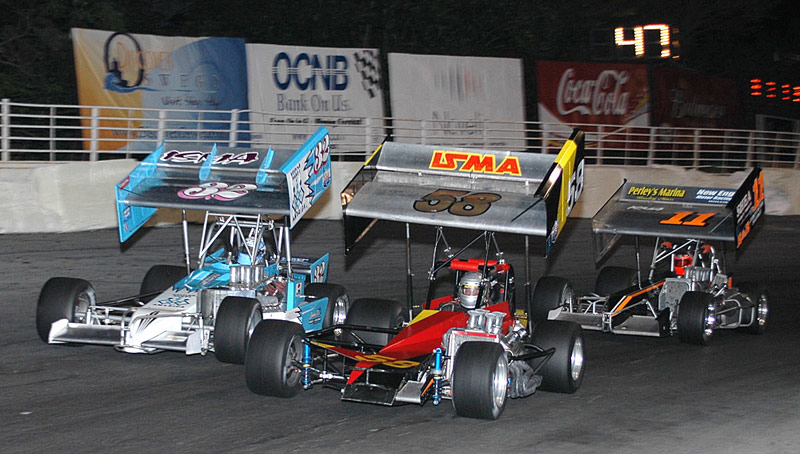 Oswego, NY – The green flag dropped on the twelfth annual ISMA Super Nationals at just about 8 pm on Saturday night at Oswego Speedway. Twenty-two minutes later Nokie Fornoro stood in victory lane after winning his first – ever Super Nationals. It was his third win of the ISMA season. Fornoro took the lead on lap 18 in the Soule Racing 32 and had Chris Perley, who had just claimed his first-ever Oswego win in the NEMA midget Classic, knocking on the back bumper at race end. Fornoro was ecstatic with his victory and his elation was evident as he danced on his roll cage. The large crowd on hand for Classic weekend was equally enthusiastic over Fornoro’s run.

“I just have to thank Danny Soule and the crew. It was just over two years ago that he gave me a ride and we are just coming off a win at Lee a couple weeks ago. I also want to thank all the fans who come here to Oswego. It doesn’t get any better than this. I love coming here because the people are racers. Thank you for supporting racing and this track. My car owner, my crew, my motor builder, my sponsor Mike Jarret of Helping Hands of America – they are the ones who make the car go.”

“I looked at the board and saw the 11 and the 0 coming behind me. Those are to of my good friends. Heck, I used to sit on Bentley’s lap when I was little. These are two great racecar drivers. This was a fun night.”

“I thought we were catching Nokie for a while there, but then we tightened up. I think this is great. I think it’s the first second I’ve gotten here. We’ll take a second and a third. It’s good that I stayed ahead of Bentley to lead him around. He doesn’t know his way around here anymore, “ Chris said kiddingly. “These cars work great. R&R Motors does a great job. My crew and sponsors – Ed Shea is here tonight – what better place than to finish two and three at Oswego Speedway. If we’d had the luck we had in the midgets, we might have won, but second is good. It’s been a couple years since Bentley’s been here and I’m glad. If he had been here more, he probably would have blown by all of us.”

Amidst the thunderous applause, Bentley Warren basked in the limelight once again at Oswego. It was a third place, but the crowd treated it almost like a win for the veteran of five decades of racing. Starting thirteenth in the second Vic Miller-owned super, Warren crept up to third past Pat Abold and Joey Payne just prior to the dropping of the first yellow flag on lap 37. A couple lap cars separated his 0 and the 11 when the checkered fell.

“The car was wicked good. I had a ball. It was really, really fun. Vic Miller builds such a great car. He’s old school, but it works. K.I.S.S. – keep it simple stupid. There’s nothing trick. Just a well-prepared car that runs.”

Joey Payne jumped from his midget ride to his super ride and took up the lead from the get go of the 50-lap Classic weekend event. Justin Belfiore, Dave McKnight and Lou Cicconi, who also ran in the midget event, trailed. Kyle Carpenter was the first casualty of the race when he suffered a flat left rear and headed pitside before a lap was in.

McKnight closed in on Payne as the race set a torrid pace clicking off lap after lap under green. But it was Nokie Fornoro who got by McKnight for second on lap 17 and one lap later, he took over the lead from Payne. Nokie set sail through the traffic and was in command at the halfway mark. Payne and McKnight continued to battle in second and third while Pat Abold ran fourth. Coming up behind Abold was Perley and as Lou Cicconi slid his fluorescent 75 into the pits with mechanical problems.

Behind the leaders was some strong racing between the likes of Joe Petro, Russ Wood, Jon McKennedy, Joe Gosek and Mike Lichty.

Just before lap 30 the Pennsylvania veteran driver had a three-lap car cushion over Payne and McKnight but Perley was moving steadily forward. With 20 to go, Perley was in second, moving around first McKnight and then Payne in some outside moves that were reminiscent of his old runs. Also making moves in traffic was Warren who got by the likes of Joe Petro, Russ Wood and Joe Gosek as he was moved effortlessly by.

The first of several cautions flew on lap 36 when the V-2 of Eric Shirey spun in between one and two. Shirey restarted but soon pitted out of the rapid race. This bunched the field, but the lap cars were still stationed in between the leader Fornoro and the second place runner Perley. The race got mired on this lap when yellow dropped on the restart for a spinning Dave McKnight, who was relegated to the rear.

One lap was completed before two more quick yellows flew for the 5 of Vern Romanoski and then a multi car tangle affected Jamie Letcher, Mike Lichty and McKnight again.

The green stuck on this restart as all eyes were on Fornoro and Perley out front and Bentley in third a distance back. The leaders took off, first alone out front, then weaving through some potentially dangerous traffic for Fornoro. But, Nokie held on and Chris just couldn’t make a move by. Bentley stayed in third while Pat Abold and Joe Gosek ran in the top five as the checkered flew for the jubilant Fornoro.

Abold was a bit disappointed in this fourth place. “We were loose from the beginning and it never came in the whole race. A fourth place is a solid run but it wasn’t what I expected tonight. I was really confident tonight. I really felt we had a car that could win. But, it was a solid finish.”

Joe Gosek, driving the May Motorsports 77, finished exactly where he did a year ago in the same car. “We had a good run. We started ninth. We went back to fifteenth and then we moved back up. We got hung up in traffic late in the race. I thought we had a shot at it when I got by Russell and Pat Abold. But I thought we could have done a little bit better those last 13 laps. I was hoping for a little bit better than fifth, but it’s a good start to the weekend.”