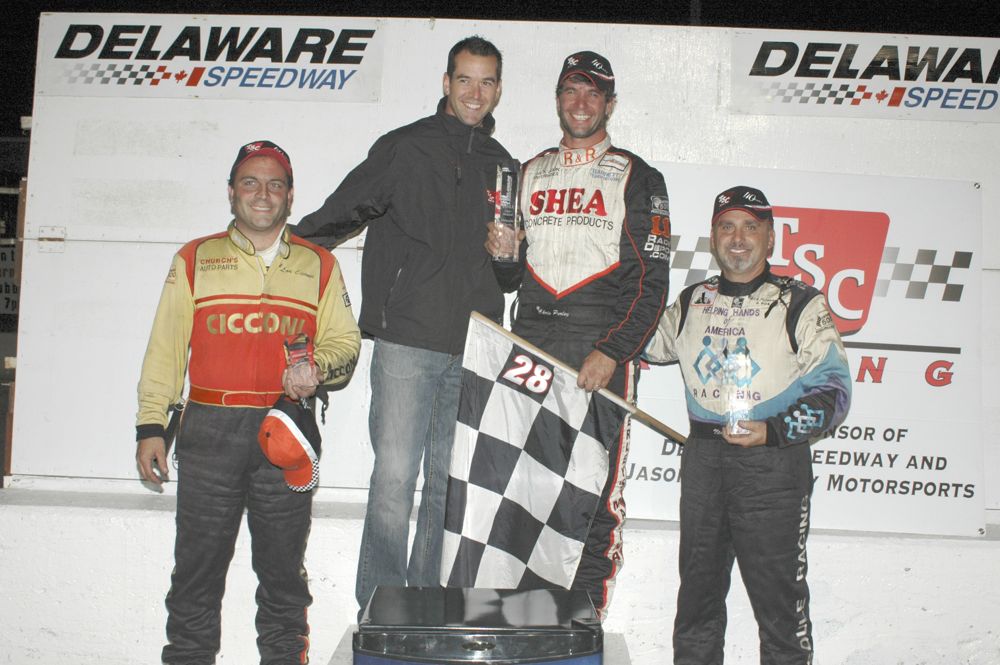 Delaware, Ont. – Friday night’s ISMA-Wirtgen Super Series return to Delaware Speedway after a 22-year hiatus turned into a survival of the fittest event. Winner Chris Perley even had his doubts of finishing after some brushes here and there, but after a lap 38 refuel stop, Perley was able to pull away for win number nine on the season and his first ever at the famed half mile near London, Ontario. Only 11 supers remained on the track when the checkered finally fell.

“We had a decent car but we just survived. It was so hard to pass out there. I got run into the wall. I thought that was going to end my day. Luckily we just kept going. Then I got up to Louie and couldn’t get by him. I think I had a little bit of an attitude at getting run into the wall – not by Louie – but I ended up bumping him and I didn’t mean to. Luckily both of us kept going. Once I finally cleared Lou I just kept picking them off. It was unfortunate for the 97 and Mike Lewis. He looked like he had it in the bag and it would have been a first time win in his first time in the car smoking all of us ISMA boys but it wasn’t to be. It is unbelievable… nine wins – ten for the team. We even got a Valvoline frig out of the deal. Now, it’s on to Berlin. Thanks to Eddie Shea who is here tonight and all the sponsors – R&R, Perley’s Marina, New England Motor Supply, Jack Cook Enterprises, Barrett Transportation, Hardy Transportation and to all the great fans who turned out tonight.”

Nokie Fornoro, who suffered his share of bumps and bruises had this to say in victory lane after finishing in the runner-up spot. “I’m happy we got a second out of it with the front end all bent up. The canard wings were so bent I couldn’t even go down the front straightaway. It was picking the nose up so bad. That happened in the first melee and then I got into the wall down the front chute and bent the right front and right rear wheel. Either way we got a second out of it and I’m happy. Congratulations to the Miller and Perley team and to Louie for his third. I think we had a decent show here. It looked like a heluva crowd. Thanks to the fans for coming. Thanks also to the Soule team , Helping Hands and all of our sponsors.”

Lou Cicconi’s third place run was also one of a few trials and tribulations also. Lou commented in regard to his podium finish, “It was a tough one. It was really bumpy out there. I’m just happy to finish third.”

The race took several attempts to just get under way as first the 94 of Dave McKnight expired and went to the pits and then Brandon Bellinger made a trip in and out. On the green Denny Fisher spun off the fourth turn and landed against the inner pit wall. In simultaneous occurrences, Justin Belfiore went to the pits, Dave Trytek spun and the 9 of Tom Hessert stalled. Fisher was the only hook job. One more attempt at green found Trytek stopping again for another push.

Bob Magner finally took the initiative and the lead for two laps before Dave Hosie brought out the yellow again with a broken strut. Larry Lehnert went pitside here while the 3 of Hosie made an attempt to reenter the fray but failed.

Lewis, from the USAC ranks, was on a mission as he quickly moved up to third; pushing Cicconi and Petro back a spot as Chris Perley tailed Petro. Moments later it was Perley’s turn to brush into the wall while Petro slowed dramatically and left the race on lap 10.

The race became a three-way battle between Magner, Fornoro and newcomer Lewis as traffic began to play a role. On lap 12 Lewis dove by the 32 and headed for Magner. On lap 22, Lewis made a high move around Magner as Fornoro still sat in third. Cicconi and Perley were battling for fourth at this juncture as Mike Lichty, Mark Sammut and Mike Ordway sat a short distance behind.

On lap 35, Lewis was attempting a move around his teammate Hessert in the Lane 9 when the two brushed. The yellow flew for the 9 and he was towed in. Lewis kept the lead but not for long as one lap later the 97 broke, went up in a shower of sparks and into the pits. The 20-year old New Jersey driver said afterwards, “Howie gave me a great car and I just got impatient. I gave it away. I brushed with someone there. Every other lap car I took my time with. I think I was hearing stuff thinking someone was close to me and got impatient. It was fun while it lasted. We’ll come back tomorrow night and try it again.”

Perley, who had passed Nokie on the restart of the 9 yellow, was now the leader when Lewis exited. The 84 of Mike Lichty went into the pits shortly thereafter as the attrition continued Eleven cars remained on the track when Ray Graham’s 90 hit hard in the first turn after a bolt on the rear radius rod broke on lap 38. It was determined that the allotted number of caution laps were about to be filled while the Graham car was cradled and a red was called for fuel. Mike Lichty used this opportunity to reenter the field two laps down.

When the race went green, Perley broke away from the pack of Fornoro, Cicconi, Magner, Sammut and Ordway, the only cars left in the lead lap.

The race mercifully for many, ended now without another hitch as Perley came under the checkered alone. Fornoro and Cicconi had a couple lap cars in between them and the leader in second and third. Magner and London resident Mark Sammut finished up the top five.

Magner said later, “It was a long, long race with a lot of cautions. I lost the lead in a lot of traffic. The car was tight the whole race; too tight to stay up there. I’m glad to take fourth and we’ll go on to Berlin tomorrow. I’d like to thank my owner Jeff Holbrook for pulling up alongside of me on the slow laps of the cautions and telling me to keep my head. It really helped out a lot.”

Mark Sammut was happy to have a good finish close to home. “We’ll take this finish for sure especially the way this season has gone. The car is one piece and we finished in the top five. We can’t knock that at all. We still have a ways to go to catch the fast guys but we’re getting closer. It’s great to have a good finish before the hometown fans and hopefully they’ll do something to the track before we come back next year.”

Mike Ordway, Justin Belfiore, Mike Lichty. Johnny Torrese and Jeff Holbrook finished up in the top ten. Brandon Bellinger, in eleventh, was the last car remaining on the track.