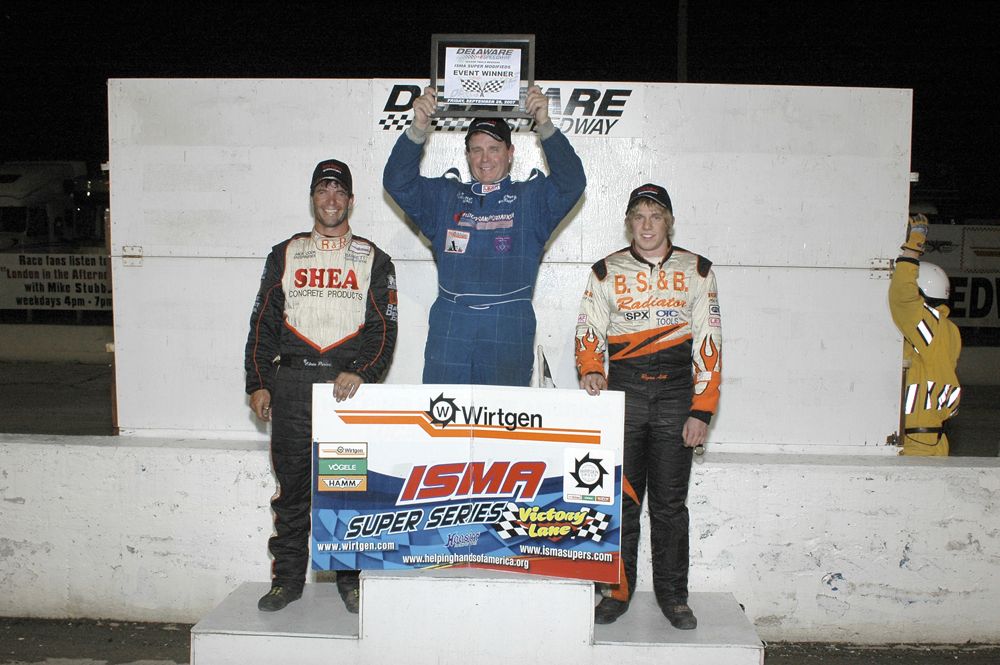 Delaware, Ont. – It’s been three years since Dave McKnight has won an ISMA-Wirtgen feature. It may have seemed even longer to the veteran driver. To say that he’s has been having his ups and downs would be an understatement. The 2001 ISMA champion, who had six feature wins that season, has struggled to get back on a consistent track. It was definitely a morale-booster for the Brampton, Ontario resident as he stood in victory lane hearing the applause from the large Canadian crowd on hand Friday night at Delaware Speedway. Still sore from a bone-jarring crash at Oxford Plains over a month ago McKnight relished the moment nonetheless. He took the lead from fellow Canadian Ryan Litt on lap 32, and was challenged by archrival Chris Perley for a couple laps before Litt came back to challenge again. But it was McKnight’s night as he pulled away from the Litt-Perley duo to cross under the checker with a comfortable margin of victory.

Said a sore and tired McKnight in victory lane, “What can I say? After the crash at Oxford, and at the beginning of the year tangle with Chris and then getting three seconds, it’s been quite a season. I’m still hurting from Oxford. I’ve got a cracked sternum. It hurts like hell. The guys on the team did a great job putting the car back together after last month. It’s just awesome to get back to victory lane. I know that everybody has been working at it and we needed this win big time. It’s late in the season but a W is a W. The battle with Ryan was great. He’s an up and comer. I know the Litt family from way back and I’m happy for them. Ryan did a great job tonight. He kept it tight. He made me work the outside. He didn’t give me an inch. That team definitely had a shot at the win.

“I’d like to thank my wife, my kids and family because they gave me the time to be at the shop and get the car fixed. And, then all the guys on the team and Brad and Pat – the whole Patco team really did a great job. I have to thank this crowd also tonight for coming out and cheering us on.”

The surprise of the race was undoubtedly young Ryan Litt who was running the Dave Lair-owned 07 super for only his third time. The sprint car regular had the pole and used the front spot to get out front early. After surviving through several yellows that bunched some hotshoes behind him, it was evident that he was running the race of his life. When Dave McKnight and Chris Perley began knocking on his door, he slammed it shut lap after lap until McKnight finally found a way around on lap 32. Perley was the next adversary by but Perley made a slight slip and Ryan seized the opportunity to retake his second place spot with ten to go. Litt indicated that he was a bit tired of cranking the wheel after the race but was smiling widely after his runner-up finish. “Tonight I finished second in only my third race in this car. It is awesome. Thanks to my team. This car is pretty similar to the sprint I drive but there are differences especially in the motor and the seating. But, I love running both cars. It was great to get such a great finish in front of my hometown fans.”

Perley, who was coming off a bad crash at All-Star Speedway on Sept. 8 and a dnf at Oswego the week before, was just happy to be in the top three. “It was a great race and to get a third too – I’m ecstatic. We haven’t been finishing much lately. We really just needed to get through this race. It was quite a battle up front. Any one of us could have won this race. I thought Ryan was going to pull it off but Dave needed one. It was great for Dave and great for Canada. I’m glad I didn’t take it away. I had a blast out there. I miscued there and went a little high and Ryan got back by. It was a great finish for all of us.”

Twenty-two cars answered the call to green after late scratches by the 61 of Doug Didero and the 3 of Paul Hosie. Ryan Litt bolted into the lead but two laps later a yellow would become a red as a jumble in the backstretch saw contact between Brandon Bellinger, Vern Romanoski, and Rich Reid when the 40 of Bob Magner slowed suddenly. While Magner ran into the pits, Reid and Bellinger were pushed away as Romanoski rounded the fourth turn under yellow. Unfortunately, Vern had lost an oil filter in the fracas and he left a trail oil as he was pushed into the pits. A lengthy cleanup ensued.

Back underway, Litt was unstoppable out front as John Torrese, McKnight and Gene Lee Gibson followed in the sorting out process.

By the lap 20 mark Litt, McKnight and Perley had pulled slightly away as Lichty and Sammut held the fourth and fifth spots. Torrese still held off Ordway as Benson, Summers and now Michael Barnes, battled behind.

Yellow flew for Brandon Bellinger on lap 23 with the 02 being pushed away but into the pits. He would be back out at the rear.

There were no other slowdowns as McKnight pressured the Springfield, Ontario youngster time and time again to no avail. Finally on lap 32 Dave found the spot and passed Litt for the lead on the front stretch. But Litt wasn’t going away and neither was Perley. On lap 36 Perley drove by Litt but four laps later Litt drove back by the 11 after Chris’ miscue.

A massive traffic jam found McKnight easing out front as he put Randy Ritskes in the Morton 46 in between him and the second place runner Litt. Another lap car sat in between Litt and Perley as the race wore down. Mark Sammut ran fourth ahead of Lichty at the checkered making Perley the only non-Canadian in the top five much to the crowd’s delight.

Said London’s Mark Sammut after the 50-lapper, “We would have liked to finish a little better obviously. But hey, it was a top five and we beat the guys we had to beat for the points so it was a pretty good night all in all. The 94, 11, and 07 were quicker than we were at the end of the race. We had a fourth place car and that’s where we finished so we’ll take it. It was a good night for Canadians.”

Lichty made it two Patco cars in the top five and commented, “It was not the finish we were expecting but it was a great day for everybody on the Patco Transportation team. Congrats to Dave ending up with a win. We just missed it on our part. We started eighth and worked our way up to third. On long runs we were horrible. On short runs we maybe would have had something for them. After three or four laps they started pulling away. We were way too tight. Hats off to the crew and maybe we’ll get them tomorrow.”