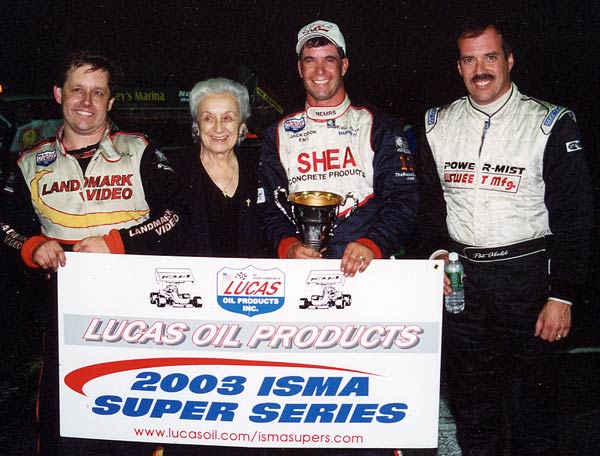 Seekonk, Mass. – Chris Perley drove the Vic Miller number 11 into the lead early at the ISMA show at Seekonk Speedway on Saturday and stayed right there the entire way. The win, his third of the season, was what Perley came for. The nine points he would gain over second place challenger Russ Wood was a bonus as Perley and crew are on track to a possible first-ever ISMA-Lucas Oil title with only one event left in the 2003 point season. But as a Miller crewman said later, Chris went out to win the race and counting points was not in the game plan this night. Teammates Pat Abold and Russ Wood chased Perley through heavy traffic on the tight third-mile but couldn’t get within shooting distance as the lap cars piled up in between. And that’s just what Chris Perley was hoping for.

“We started off neutral,” said Perley later in victory lane. “I thought we were going to be too loose. I figured I’d go to the front and just try to hold on and honestly I thought we were going to get passed. But we didn’t. That’s what happens when you’re able to run away. You can get those lap cars in between and that was it. That’s what we needed.”

Second place finisher Pat Abold, who had started eleventh in the field of 25, was happy with another competitive run in the Dunigan 26. “Second again, said the Pennellville driver who came out of a semi-retirement this year to run selected shows. “It was a great run. We started deep in the field and this is a tough little place. I’m really happy with this finish tonight, I truly am. We had a good car. It was a fun race tonight.”

Russ Wood started alongside Abold and knew he had to keep near or in front of Perley in order to keep his championship run a possibility. He did just that finishing third. Russ commented later “We finished third. The car was good in the beginning. But, it got a little too tight in the end. That’s all we had for him. Chris was fast. We started halfway through the pack and worked our way up, trying to stay out of trouble. Traffic was tight. Not a bad finish…”

Jamie Letcher led the way for the first few circuits of the fall 75 lapper at Seekonk until Perley stormed by on lap 4, but Letcher continued a strong run in second for many more laps as some tough cookies pounded at his door as in Lou Cicconi and Nokie Fornoro.

The action slowed on lap 10 for Howie Page’s 18 which sat the wrong way in the turn. Page was able to continue and the race resumed with Perley at the point.

Jeff Horn flew the next flag followed closely by another slowdown for third place runner Lou Cicconi who broke, causing him to brush the wall and require a hook.

Perley took off out front and quickly picked off car after car as he ran away and hid while Letcher had Bentley Warren and Pat Abold packing the heat behind. By lap 25, at least three lap cars were in between the first and second place cars.

Pat Abold, who was moving through traffic with precision, got by Letcher by lap 29, as Letcher began to fade off his second place running pace. It was Letcher who brought out the next yellow when on lap 35 his 58 apparently broke something with Jamie hitting the front straight wall and climbing it to land sideways on the cement.

Perley had a six-pack cushion of cars over Abold when the green dropped again just before the midway mark. The top contenders behind were Bentley Warren, Russ Wood, Scott Martel, Nokie Fornoro and Dave McKnight as this pack tried to get by the same bunch Perley had put behind him.

Green prevailed for the remainder of Perley’s run out front and he continued to put away cars at every opportunity, still expecting someone to come up and challenge him for the lead. And, it was Abold who was trying very hard to comply.

The last ten laps of the rapid paced second half found Perley knocking on Martel’s back door as Abold, Wood, Warren and McKnight continued to chase over a half track away. With two to go, McKnight, racing with a heavy heart as car owner Brad Lichty’s brother lay gravely ill back in Canada, passed Warren for fourth.

It was all Perley as the checkered wave with Abold, Wood, McKnight, Warren and Martel the last of the cars the number 11 had not lapped.

Said McKnight after his finish, “Well, the car is in one piece. That’s a bonus right? The Lucas Oil number 94 ran good tonight. It’s probably the best we’ve run all year. We’ve been chasing some problems. The guys have done a great job. It’s not a win, but I’d like to give this finish to Dennis (Lichty). My heart and prayers go out to him. Hopefully he can pull off a miracle. But, getting back to the racing we have struggled all year long and we’ve been in the fence the last two weeks besides. We started 15th here and were able to get to the front. I think we had a good race car to win the race. It was just our starting position that hurt us a little bit. I got Bentley with two to go and I think we were as quick as the leaders. Hey, we’ll go on to Thompson now. I’ve led that race – been second and third – maybe that one will be the one we grab before the year is done. And then we’ll have something to carry us into next year.”

Warren, who had won the ISMA opener at Seekonk in May, enjoyed his ride to fifth. “This a beautiful track to race on. You can do so much here. At half the other tracks the way we had the car, I would have been history. The track helps the driver to find the groove – the right groove for whatever his car is doing. It was a good run.”

RACE NOTES…A bizarre pre-race incident saw a push truck drive up over the back end of Rod Sauder’s 16 incurring damage to both the truck and car. The Steve Miller crew were able to make the necessary repairs to get back into the race but had to start in the rear instead of outside pole as scheduled…. The ISMA-Lucas Oil Super Series ends its 2003 season with the traditional World Series of Racing at Thompson, CT on Oct. 19-20 with a 50 lapper. Unofficially, Perley and the Vic Miller crew hold a 16 point lead over Russ Wood going into that event…Tickets are on sale now for the annual ISMA awards banquet to be held Nov. 8 at the Turning Stone Casino in Vernon, NY…

Heat 1 Note: A massive pileup on the green of heat one postponed the heat until last in order to allow as many cars to compete as possible. Two cars – John Payne’s 88 and Randy Ritskes’ 9 were not able to rejoin the heat lineup.