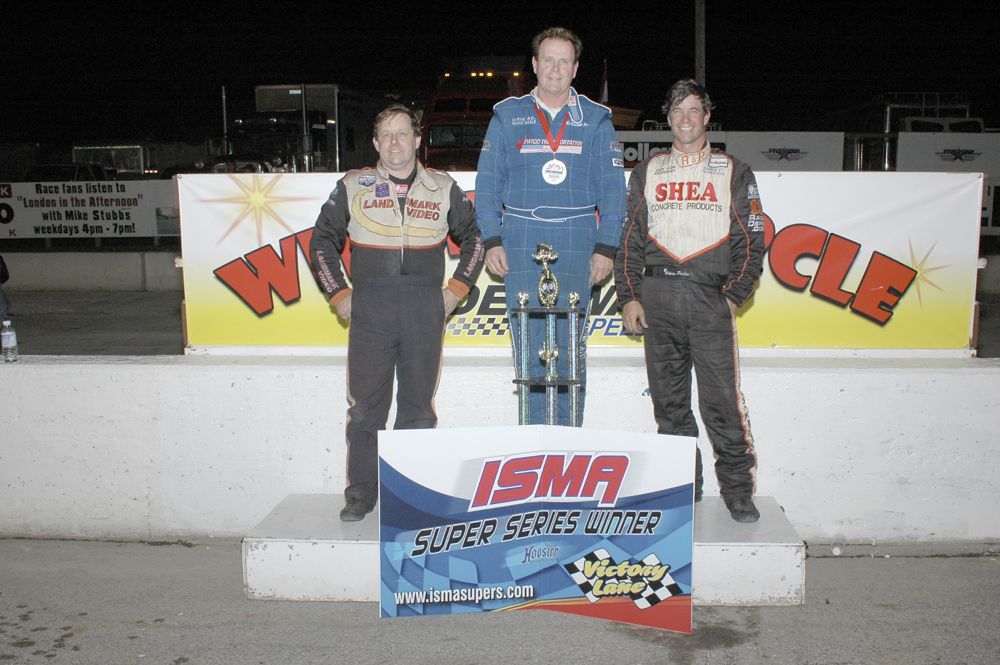 Delaware, Ont. – In 2007 Dave McKnight broke an ISMA winless streak of several years by coming home the victor at Delaware Speedway in his native Canada. Friday night he repeated the feat after taking the lead from Jeff Holbrook on lap 15 and staying out front in the competitive 50-lapper for the duration. McKnight was able to build up a comfortable lead while behind him others were battling tooth and nail to gain a position or two.

“We got a little bit of a break. We started decent tonight,” said the Brampton, Ontario driver. “We got out front and we gave it everything we had. I knew Chris and the others would be coming but we definitely had a stronger car tonight. We’ve been struggling all year and we just haven’t had the car to get the job done. Tonight we did.”

Being before a large Canadian crowd didn’t hurt his effort by any means and he acknowledged the fact. “After being the last person to win this race and trying for a back to back, I think I pushed the envelope a little to make me try a little harder. We didn’t have to pass much tonight and once we got out front we had a clean raceway most of the way. It made it a lot easier. I’m sure Chris and Russell had to get through the pack. But, hey that’s racing. Tomorrow will be a lot tougher so we’ll try to capitalize on this run and make it better. Hats off to the whole team, Patco Transportation, and to Forrest and Forest our engine builder who got our good motor back in a hurry. Thanks also to everybody involved in the race tonight.”

Fighting his way to a second place in his first ever appearance at the Canadian half mile was Russ Wood in the Jeff Holbrook-owned 29 and it was his car owner that gave him the greatest competition.

“I was happy with the car. We were coming on strong and it was handling good. I think I was reeling in Dave. I had a heck of a battle with Jeff (Holbrook). That was some wicked racing with my car owner. He wasn’t giving me an inch. I really wish it had been a 75 lapper. For my first time here, I had fun. I’m happy with the second.”

Chris Perley, starting in mid-pack, had to wrangle his way up through some tough traffic for his third place finish.

“Twelfth to third… I’m happy with that. This is a crazy place to race. Everything is so tight. There’s just no room. Every pass you make you just hold your breath and hopefully the guy you’re passing doesn’t move and you don’t move. And nobody touches. You just try to keep it clean. Everybody I came up through to pass was a battle. There wasn’t anybody I passed that was easy. But, the car held together and I’m surprised I came out with a top three. I actually think I needed a late race caution because it looked like we were really gaining on them – at the end. But, by then they were so far ahead I couldn’t do anything.”

Twenty-one supers were gridded for the PATCO-sponsored 50 with Bobby Haynes Jr. calling it an early day after blowing a motor. Polesitter Jeff Holbrook did the honor of taking the point from the drop of the green. A quick yellow flew on lap 6 when Doug Didero looking to be out of shape but saved it.

Back underway it was Holbrook, McKnight, Dave Trytek, Bob Magner and Russ Wood being chased by a pack of hungry supers. Trytek brought out the next yellow when he brushed hard on the front straight and had to pit for a tire. He rejoined the field at the tail.

Out front Holbrook, McKnight, Magner, Wood and now Ordway Jr. were top five with Dave Shullick Jr., Mike Lichty, Mark Sammut, Robbie Summers and Perley were the next five up. Moving through the field from 15th was Doug Didero, who had arrived late and had had little track time albeit for his 10-lap heat run.

On lap 15, Dave McKnight moved by Holbrook for the lead leaving Jeff to contend with his teammate Russ Wood for second.

The race slowed on lap 21 for Dave Shullick Jr. who had come to a stop just before turn one after fighting his way into the top five. His night was done.

On this restart, McKnight fled the pack while Wood and Holbrook went at it for second. Bob Magner was fighting off Chris Perley who had just fought by Mike Ordway Jr. Mike Lichty, Didero and Sammut. Rob Summers fought with Johnny Benson Jr. and so on down the line. The wheel-to-wheel, spark-flying racing was everywhere on the track as the race went green from there on in.

Wood finally shook off the pesky Holbrook around lap 39 with Perley moving by the 35 with less than ten to go. Magner held off Ordway Jr. as Didero continued his forward motion until time ran out.

McKnight crossed the line a safe distance from Wood while Perley tried to move in on Russell to the end. Holbrook settled in for fourth just ahead of Bob Magner, a former Team Holbrook driver.

Holbrook commented after the exciting race, “The car was tight the whole race. It was nice finishing up in fourth. I had no clue that was Russell trying to get by me or else I would have let him go. And, to just nose out my old teammate Bobby (Magner) at the end was fun. It was good clean racing. It was a good night for our whole team. We had three cars in the top eight. It was fun.”

And, Magner agreed. “I’m pretty psyched. This is only our third winged show with a brand new car this year. To be able to come out and run with these guys is as fast as it gets. I’m real happy. I almost got Jeff there at the line for fourth but we’ll take fifth. This is my first ISMA show where there’s no passing flag so these guys don’t know who is there and they are racing hard. You just have to deal with everybody. If I hadn’t sat back for a lap or two I think I could have gotten Jeff on the outside earlier. It is what it is. We have a complete car and a top five … I’m psyched.”