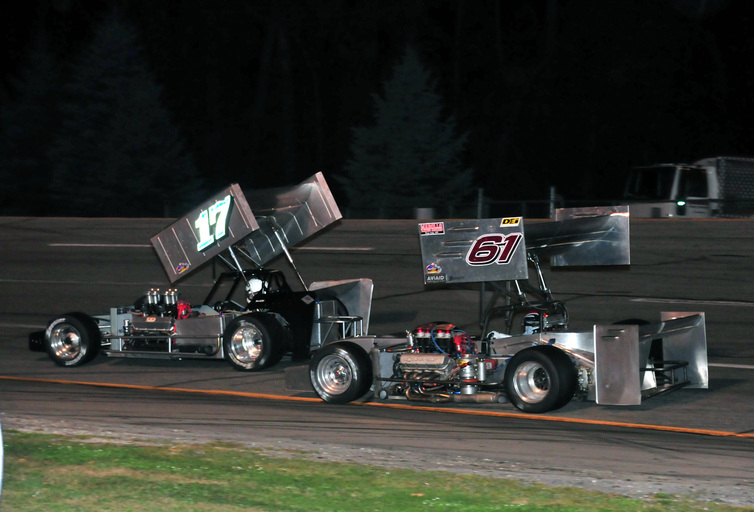 As Ted put it in victory lane, he was two for two in his supermodified competition. Not a bad record to say the least.  But put the Plainville, CT driver in a good car – in any division – and he’ll race it to the max, even the tough, ultra fast, winged supermodifieds. Although new to the Midwest crowd, those who had seen the ultra-talented shoe race from modifieds to full-bodied NASCAR cars and anything in between, were not surprised.

Christopher was overjoyed after his second career ISMA supermodified win in as many outings. “This is a great track. It was fun racing. This is the second time I’ve run a supermodified for somebody for the first time, started dead last and have won.

His expectations, after a dnf in his heat were tenuous. “I was hoping we’d get a couple yellows because we had a problem in the heat race and started at the end of the field. I thought if I got a couple yellows, it would bunch the field up and I’d see what happened. These cars are really different. When I got up close to another car it would take the air out and just make the car push. So I tried a couple ways to pass people with it and finally caught up and passed Mike. I’d like to thank Clyde and Susan Booth for the ride. They really do a good job with this car. I’d also like to thank CorrPak for putting up some extra money for this race and for the crowd for coming out despite the cold.”

Mike Lichty and Russ Wood went into Berlin fighting for the ISMA point title with only a 21 point difference between Wood at the top and Lichty. Both won their heats and the feature quickly developed into a battle between the duo for the win. Lichty found himself in second at race end, with Wood fourth.

Mike described his night, “For the first probably 30 laps the car was really good. And then we had a couple cautions toward the end and I knew we were getting loose. I kept looking at the lap order and saw Woody there. I really didn’t want to run too hard and burn myself out and then Teddy got by. But, you know I’m happy with a second. Hats off to Mark for a strong third and hats off to Clyde and Ted for their win. Thanks CorrPak for helping put this deal together and Patco and Stage Door.”

A big smile came from the second Canadian on the podium Mark Sammut, who raced his way to third. “We struggled a little bit earlier today but the car was really good in the feature. It was coming along at the end. Then we ran out of tires a little bit. Those last yellows didn’t help. It took me three or four laps to wound up again. I got beside Mike a couple times near the end but with the lap traffic things just didn’t play out my way and I didn’t have a chance to get by him.”

Rich Reid and Dave Duggan led the way to green with Reid leading the first three laps before Lichty came up from sixth to take first.  Reid ended up moments later bringing out the first yellow of the race and ended up in the pits unfortunately on a tow truck.

On the restart of lap 5, Russ Wood made quick work of Eddie Witkum Jr. to take over second and the battle out from between Lichty and Wood began. As Lichty and Wood pulled away, Eddie Witkum, Dave Duggan, Ben Seitz, Mark Sammut, Bob Magner, Christopher, Johnny Benson, Rob Summers and more were launching a torrid battle of their own.

Out front Lichty and Wood became close friends for a while with a .7 second margin between them as things ran hot and heavy some distance behind. The man on the move was Christopher who was up to fifth by lap 16. Lane, Sammut, Magner, Benson, Summers, Locke and Denny Fisher were running side by side as the race approached half way.

Unfortunately for hometown hero Benson, a brush with another car during the hard racing, sent him over the second turn and the yellow flew as his 74 was retrieved. He was able to restart with a quick tire change much to the crowd’s delight.

The intense racing continued on the restart but Lichty was showing signs of pulling away from challenger Wood. Russ slipped back a couple car lengths as the race passed halfway with Seitz and Christopher putting pressure on the 29. Sammut, Duggan, Magner, Fisher, Summers and Dawson were going at it in the top ten as Benson worked his way back to 11th.

Christopher, a novice in name only, grabbed second from Wood on lap 27 and set his sites on leader Lichty. Wood was still quite in the mix as the race passed the lap 30 mark.

In and out of traffic went the top runners with a clear spot opening again on lap 35 allowing the 84 and 61 to pull away once more on the 7/16ths mile oval. Wood, Sammut, Seitz were now the top five as Sammut’s 78 seemed to come alive.

Yellow flew again on lap 37 when the 41 of Magner spun out back. He was pushed into the pits and re-entered the race at the tail.

The restart gave Christopher his shot at glory and he took it soon thereafter. On lap 40, T.C. as he’s called in most circles, made the move by Lichty for the lead.

In the last ten laps, Lichty was able to stay with Christopher for a while but drifted back allowing Ted’s astonishing win to be completed. At the checkers, the 61 passed over the line into the ISMA record books while Lichty, Sammut, Wood and Seitz raced into the top five.

Lichty may have gained a few spots in the points after finishing ahead of Wood, but Russ was content with fourth. Said Wood after the race, “We were running pretty good the first five or six laps. We got to second behind Mike. We were way too tight. We thought the track would be looser than it was. We were struggling. After 30 laps the right rear was gone, we got loose and faded back to fourth. All in all, it wasn’t too bad. Congratulations to Teddy and Clyde. Teddy’s the best in the Northeast if you ask me. He was in a good car. I wish I could have been in the stands watching him. We’ll take our fourth and head on to Seekonk.”

Seitz was back on track with his new team’s game plan. “It was a good run. This is a tough place. We burned our tires up about half way and had no forward bite. I’d like to once again thank my sponsors and my car owner. The crew that came out with us made a big difference. But, it’s a tough track. I’m happy. We’re gaining every race and learn every race.”

Notes… Christopher lost a hub in the warmup laps of his heat and did not even race in that qualifier…Danny Lane lost a brand new motor in his rebuilt 97 in practice after only four laps. Eddie Witkum drove the 97, which has been in competition since Lane’s bad crash earlier this year…Bobby Santos III will drive the Booth 61 at Seekonk while Christopher will take the wheel at Thompson, the site of his only other ISMA competition over 10 years ago.