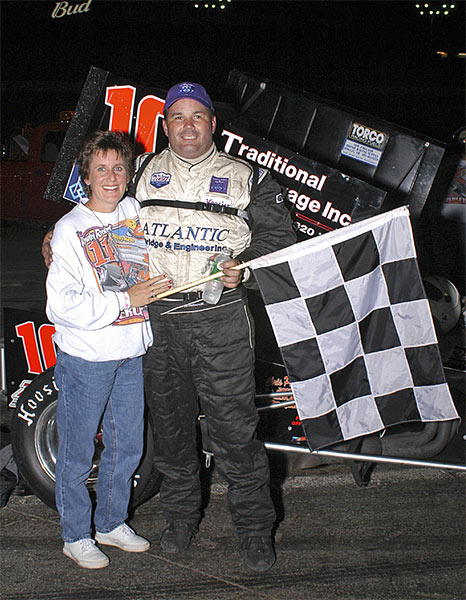 Seekonk, Mass – Saturday night Ricky Wentworth of Haverhill, Mass. came home with his first-ever ISMA Lucas Oil/Helping Hands of America feature win and he did it in style. The former 350 super pilot who just last season was ISMA co-rookie of the year, started sixth in the strong 24-car field and took the lead from one of his former 350 comrades, Matt Seavey, on lap 19. And then Wentworth, went! By the end of the 75-lapper, which was dotted by only a few slowdowns, Rick was moving by some of ISMA’s best as he lapped the field. “I was passing people who were usually blowing by me,” said Wentworth in victory lane, somewhat amazed.

He went on to comment after the idea of the win settled in. “The car was perfect today. I think this is my new home track – Seekonk. I had my very first ISMA heat win here and now my very first feature race here. So this is my new favorite place. I knew the car was pretty good today after practice with the old tires. When I put the new tires on it was great. Chris won last year in the same car and he started sixth and won. I was starting sixth, so that was a good luck omen the Perley crew told me. The car went right to the front. It was perfect. I couldn’t have asked for a better racecar tonight. I didn’t know how many lap cars I had there. I thought I might have a couple, so I slowed down a little so I wouldn’t burn the car up and save it for the end. But, nobody came up. Nobody showed me a wheel, so I just kept it going. I was looking for my signal people but I couldn’t find them. I have to thank my sponsors and crew. People think I’m a team car with Chris, but we are really not. I build my own car, but use their specs, the jig etc. They help me any way they can, as I don’t have a lot of help. I guess you’d say unofficially we are teammates so I thank them too.”

The man, or teenager on the move behind Wentworth, was Mike Lichty who came up from 13th. Said the young Canadian rookie, “A screw up in the heat race set us back and we started 13th or whatever. It just took too long to get up. The car was good – a little tight all night. It could have used it a little looser. I’d like to thank my sponsors Lucas Oil Products, Dayco products and Aurora. I’d also like to thank my dad. If it wasn’t for him I wouldn’t be doing this.”

Topping off the podium finishers was Russ Wood, who also had started deeper in the field by virtue of the handicapping. Wood, who had a battle going with point leader Chris Perley for many laps, settled for third. Said Russ in victory lane ceremonies, “We were going pretty good. The car was a little tight. We just couldn’t catch the leaders there. They were going good. They were free, pulling away there. We had a decent car, passed a lot of cars, but we were just a little too tight to win. We’ll take the third.”

The 32-car field of ISMA Lucas Oil/Helping Hands America supers was whittled away in three heats with some costly incidents taking out Jamie Letcher, R.D. Timmons, Mark Sammut, Lou Cicconi in a brand new car, Bentley Warren and Joe Petro. Pounding, welding and mutterings could be heard in the pits prior to the 14-car consi call. Only Timmons and Bentley Warren did not make it to the green. Jonathon McKennedy and Matt Seavey took home first-time heat checkers while another former 350 super pilot, Jamie Timmons, took the third. Lou Cicconi blew away the consi field.

Seavey led the 24-car field to green and took away the point as Justin Belfiore moved quickly into second. Wentworth pulled up behind Belfiore just prior to the first yellow, which found Kevin Tourigny in the wall, and Dave Trytek, Jon Gambuti and Dan Osmeloski scattered around the third turn.

Seavey took off on the green but Wentworth was now his pursuer and soon became the sole owner of first place on lap 19. Moving into second was Joey Payne, trailed by Belfiore, Seavey, Mike Ordway and more as the race settled into a hectic pace. “This is a tight bullring,” as Wentworth put it. “You are always turning here.”

A bobble and recovery brought out the yellow on lap 40 to slow the hectic pace a bit.

On the restart Wentworth had a three lap car cushion between him and second place runner Belfiore as pressured mounted from Lichty for second. Wood, Ordway, Perley, Joey Payne, McKennedy, McKnight and Abold were still moving in the thick of things with 35 to go.

Wentworth was definitely flying high out front putting cars down a lap at every circuit. The next stop would be on lap 65 when the second place bubble burst for Belfiore, who sat disabled in the third turn. He was able to restart at the rear.

Chris Perley, who unofficially clinched his second straight ISMA title, was happy with his fourth and his friend Wentworth’s first. “Pulling a fourth out is good. This is the car we wrecked at Oswego. It’s still not right. It wasn’t right all day but we worked and didn’t give up and got a respectable fourth with an ill-handling car. I think this wrapped it up basically tonight, so that’s what we came to do. We can go and play at Thompson and not worry about anything. It’s going to be awesome. Congrats to Ricky. That’s awesome. I heard that he was just flying so he won his first in style. That’s the way to do it.”

Mike Ordway, who has had a small string of bad luck of late, was pleased with fifth. “It was tough, it was tough. The car was just way too tight. We thought the track was going to loosen up but it didn’t. We’ll take fifth. It’s better than the last couple races we’ve had. There was a lot of lap traffic. Ricky was really running good. That’s great for him. We had a good run all in all. We’ll take it.”