PERLEY IS BACK ON TOP AT BERLIN 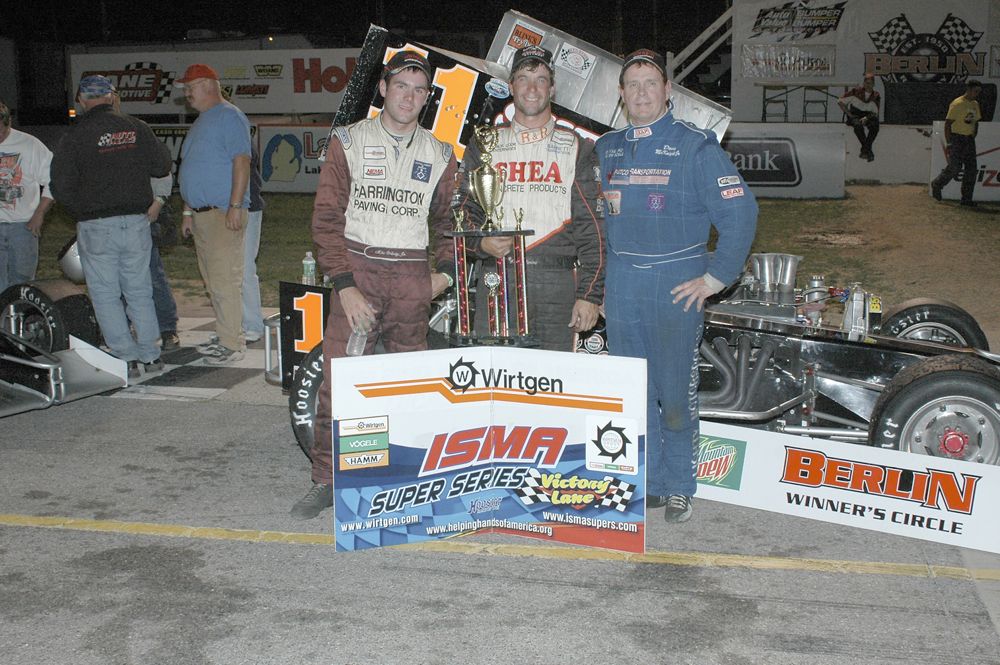 Marne, MI – Chris Perley had two bad races in a row in the last two ISMA events, but he made a quick recovery from his mini downward spiral. Friday night he took a third at Delaware Speedway. Saturday night he lapped up to the fourth place car at Berlin Raceway in dominant fashion. Starting eighth in the field, he moved into the lead by lap seven after point man Johnny Benson Jr.’s strong sprint was for naught as the rear end went in his car. Perley moved out front and never was threatened after that. His Berin Raceway win was his tenth of 2007 matching his 2006 win total. With one race remaining on the ISMA-Wirtgen schedule, there is no doubt who will be champ.

Said Perley after his second straight Berlin win, “It’s been a small string of bad luck for us. I just wanted to get the race over tonight. I just wanted to do everything I could to stay out front. I had a big mire of lap traffic there for a while. Luckily I wasn’t involved in that lap one miscue. I just wanted to say ‘Berlin it’s worth the trip!’ When Johnny Benson took the lead I felt we were pretty even. I felt that there was going to be a waiting game between him and I. He looked pretty strong. I was running pretty hard to stay with him. But, I didn’t want to tackle him at that point because I didn’t know what he had. Then he dropped out. It was a great race for me. This crew just keeps digging. We’ve had a couple wrecks in the past couple weeks and obviously the car has come back and they’re number one. I’d like to thank all the fans for hanging around and watching the show tonight. I hope it was worth it. Berlin Raceway is a great place to race.”

Mike Ordway Jr. started behind Perley in the 27-car starting field and worked his way up to second on lap 10 passing Dave Trytek for the spot. Ordway tried to stay in touch with Perley but eventually gave up to lap traffic settling for the runner-up spot to one of his mentors. “We followed Perley right up through at the start and I was thinking man we might have a shot at this. I got by Trytek and I was catching Perley but the crew might have been telling him to slow down. At the end he was running good. I couldn’t see him then because there were so many lap cars ahead of us. He was way faster than all of us. I’d like to thank Harrington Paving, Vinal Excavating, Glenn Shanks Oil, and Eddie Page who couldn’t come with us this week. He keeps asking me to mention him! And, thanks to just everyone on the crew, everyone who is making this possible for me. Thanks also to everyone for coming out here to Berlin tonight and thanks to Berlin for having us.”

In turnabout fair play, Dave McKnight, who won Friday night while Perley was third, came in third to Chris’ Berlin win. McKnight, who also started behind the 11, was involved in a green flag lap red, which saw Danny Lane take the Howie Lane 9 up and over his tire. McKnight came in for a change and headed back up through the field for a well fought for third.

“I think the 97 or the 40 got sideways there at the beginning,” said Dave, “and we checked up. When we checked up Danny Lane went up over my tire and put his car in the rear, hitting the wall hard. I had to go in and change the tire and work back up from the rear. The car was great these two nights. It’s been great ever since we repaired it from Oxford. It’s too bad we had to start so far back; I think we would have probably had something for Chris tonight, maybe another win. It’s unfortunate that the tire went down and a rule is a rule. Hey, the cards were dealt and we had to deal with it. We prospered pretty well. I can’t thank all these fans for coming out tonight. Hope you enjoyed the show. I hope we’re back next year!”

Twenty-seven supers lined up for the finale of Berlin’s open wheel extravaganza but not one lap was in the books before red fell. As Dave McKnight described the scenario, a yellow flew for Gene Gibson who had spun in four but the action was in turn two as the checking up caused Danny Sammons in the Lane 9 to drive up over McKnight’s tire and to hit the wall a ton. Sammons was okay but the 9 car was virtually destroyed after the melee with the cement wall. Car owner Howie Lane and crew had just put the finishing touches on the new 97 car which Rob Summers was in and Danny Lane was competing in the older car Summers vacated. Under this red-yellow McKnight pitted and so did Summers, both starting at the rear.

On the complete restart, Johnny Benson Jr. moved quickly to the front of the pack past the front row of Dave Trytek and Brandon Bellinger. Another yellow flew, as lap two was complete for the Burdette Bennett 63.

Action resumed with Benson out front and Trytek between the 74 and Perley’s 11. That lasted one lap as Perley moved into second on lap four. The lead duo pulled quickly away from Trytek, Michael Barnes, Charlie Schultz, Ordway, Bellinger and Magner.

Things looked to be getting interesting out front but before a battle could develop, Benson fled to the pit on lap six with a broken rear end. Perley was now the leader without the battle.

One more caution slowed the action on lap 9 when Randy Sweet, driving the Holbrook 35, slid to the infield and was pushed into the pits.

It was clear sailing from lap ten on for the Rowley Rocket as Ordway moved into second past Trytek. Barnes, Ray Graham, Schultz, Magner, Jack Smith, McKnight and Bellinger were duking it out behind. Unfortunately Bellinger lasted only until lap 12, pulling pit side on that circuit.

By lap twenty Perley was on another planet as Ordway barely could see him. McKnight put away Graham, Barnes and Trytek to take over third by lap 26. Moving up through the field was McKnight’s teammate Lichty who was now behind Graham.

On lap 30, Perley was moving into a new galaxy as Ordway, McKnight, Barnes and Trytek were the top five. Lichty pushed Trytek back a spot on lap 35 and leader Perley was moving quickly up behind the Graham car that was eighth.

With six laps to go, Mike Lichty had moved into fourth, as Perley was about to lap fifth place runner Barnes. With two to go, Perley was behind Lichty but a “lucky” caution saved the Innerkip, Ontario driver. Lichty got into the marbles and went off the track out back and coming back on. He moved to the rear because the yellow had flown. This actually saved him from getting lapped, as the last car on the lead lap was now the last car.

Perley crossed the line with six lap cars between his car and that of Ordway’s in second place. Two more lap cars separated Mike from McKnight in third. Lichty was fourth at the tail of the field while Barnes was fifth, running right behind Perley after being lapped.

Lichty spoke of his race back in his hauler.” It was a good day for us. Davey ended up third and I got fourth. I started out the feature horrible. Loose, loose, loose. I came in and we made an adjustment, started at the tail and worked my way back up. Then I went off the track and back on. Boy those bushes come up quickly. But we saved it and the car’s still in one piece. Hats off to the crew and everything. I hated to see Johnny (Benson) have a problem like that. I saw him checked out in front and I kind of figured this was his night.”

Michael Barnes, still relatively new to this marvelous mayhem, was just proud to be a part of it. “I thought it was great. We totally missed the setup. I was loose from lap one to lap fifty. But, to get a top five in ISMA was my goal this weekend. I am really, really happy to be out here running with these guys. A sixth and a fifth this weekend… I couldn’t really be happier. You just can’t come in and usually be competitive, but I think we did pretty well. I can’t wait to go to Thompson and race these guys again. They are awesome. To get to race against Chris Perley and McKnight, Lichty and these guys is just awesome. They are the best of the best. To pull off a top five makes me very happy. To get to race with Johnny Benson gives the supers so much credibility. He supports the supers so much and he’s got a great facility here. I had a riot racing against him in the heat. He’s a class act. I hope he continues to support the supermodifieds.”