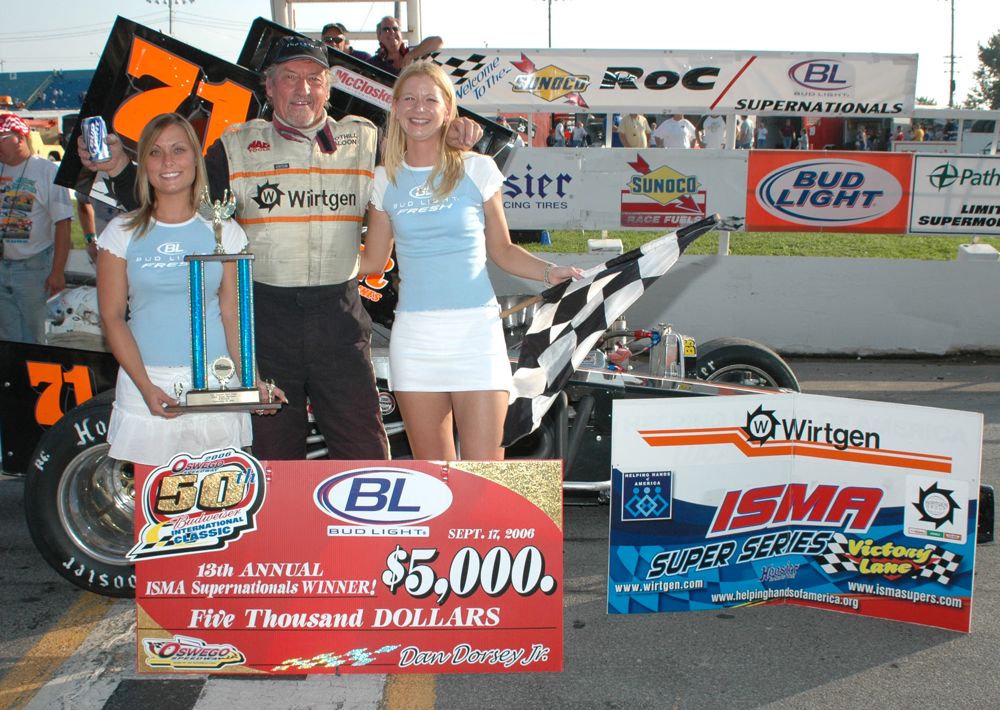 Oswego, NY – It was only fitting and proper that the man standing in the last victory lane ceremony of the 50th annual Oswego Speedway Classic weekend events would be Bentley Warren. Recently named number one in the all time top fifty drivers in the Classic, Bentley showed us why on Sunday. After a rather inauspicious start to the much-anticipated 50th anniversary weekend, which began Sept. 2nd, the end on Sept. 17 proved to be spectacular. The rain date which began with warm sunshine and a good field of winged supermodifieds, ended with the legendary New England driver doing it one more time. Driving through a field of some of supermodified’s best – several of whom were not born when he started winning races, Bentley drove by his teammate Chris Perley and race leader Dave McKnight on the 45th lap of the Bud Light ISMA Super Nationals to take the victory. Thunderous cheers greeted the man who won his first Classic in 1969, as he took a lap around the track he made his own over the five decades he raced on it. One can only presume it may not have been his last victory ride.

Said Bentley after embarking from the Miller 71 “It wasn’t easy. I was driving my butt off from lap one to lap fifty. The car was just unbelievable. They put a heck of a racecar together. I always thought Chris was a good driver but I found out it was just the racecars. Chris said during that red for me ‘to go for it if you can do it.’ He said he thought he might have something for Dave on the outside and he was going to try it a couple more times. I couldn’t catch them but when they started working together they definitely lost a couple tenths. They were off a little bit and I just had a good hole there. I drove by and said, “Thanks for the ride. See ya. Wouldn’t want to be ya. I had some breaks with traffic. It turned out to be wicked easy getting by there. I can’t believe it. I’m just as happy as can be.”

Dave McKnight, who took the lead from Dave Trytek on lap 30, remained in second after Bentley’s late race pass. He acknowledged later that “The car was solid all race It was terrible in qualifying and the guys went to town and did the adjustments. It was great for the feature and I definitely think I had the car to win but with ten laps to go the line broke off the left rear caliper. The brake went to the floor. My race was pretty much done without having a brake to set the car up. Hats off to Bentley. He did a great job. I knew he was there. I don’t think he could have gotten by if I could have used the brakes but that’s here say. Second again. Maybe we’ll get one before the year’s out.”

Bentley’s teammate who is chasing him for second on the all-time ISMA win list didn’t seem to mind that Ben had just made it one marker harder. “Awesome job – a first and a third. I told Bentley under the red that I would give it one more shot, but if I don’t get it done and you’ve got it, you better get there. He just giggled so I think that he knew that from that point he was going to be there. It was awesome for him to win. I mean I gave it everything I had. I ran outside with Dave. He held his line and it was a blast. But I didn’t have enough. I needed a couple more feet. I was working the outside and Dave opened up the bottom for Bentley and he just drove through. I thought I might be able to follow him but then I got loose. It was fun.”

Thirty-nine winged supers filled the pits and saw four qualifying heats and two consis to pare down the field to twenty-six starters for the 13th annual Bud Light ISMA Super Nationals. A horrendous crash in heat three saw Joe Gosek hit the fourth turn wall and slide upside down with parts flying everywhere, stopping in front of the flag stand. A few tense moments were when Gosek proved to be shaken but otherwise okay. The Snyder 0 he was driving looked pretty much destroyed. Joe described the accident later in the pits, “We were struggling in the heat behind Jamie (Timmons) and I was trying to get up on the outside but I don’t think I got far enough. He used the racetrack and we came together and I ended up in the wall. It’s too bad that you wreck a car like that in a heat. You’re always trying and sometimes it just doesn’t work out.”

When all was said and done, teammates Jeff Holbrook and Dave Trytek held the front row at the start of the 50-lapper. Trytek pulled immediately into the lead and proved to be a formidable point man. Holbrook stayed in second, as Dave McKnight, Mike Lichty, Nokie Fornoro, Chris Perley and Bob Magner were next in line.

Trytek began lapping cars by the 11th circuit as McKnight, Lichty and Fornoro moved by Holbrook as traffic was already playing a role.

Trytek lost the momentum he had built up, as McKnight Lichty, Fornoro and Perley were right behind with only one lap car breaking up the pack. Perley got by Fornoro several laps after the restart and looked to be seeking a ninth win on the season. Also on the move was the wily Warren who was sixth by the midway mark.

On lap 28, yellow flew again after Trytek had seen his lead disappear to teammates Dave McKnight and Mike Lichty. The 55 of Joey Scanlon and 40 of Magner were restarted and Trytek was given a reprieve as the field reverted back to the last lap.

Trytek was able to hold off the onslaught until lap 30 when McKnight and now Perley were the marauders who stole the lead away and fled the scene. Trytek soon lost third to Warren who was closing in on the lead duo. Behind Trytek were Lichty, Fornoro, Randy Ritskes, Joey Payne and Mark Sammut.

The top trio now pulled away until a lap 38 stop when Michael Barnes slid around in turn one tapping the inner hub. The 5 of Vern Romanoski had lost an oil plug and laid a grease trail around half the track. It was on this red for cleanup that Bentley and Perley chatted back and forth in regard to how to possibly get by McKnight.

With only twelve laps remaining McKnight was ready for the plotters. One thing stood, however, in his way. Within two laps he had lost his brakes. Within four laps Bentley had moved on by Perley and was heading for McKnight. On lap 45, a cheer erupted from the grandstands as Bentley put the Vic Miller 71 out front and put an exclamation mark at the end of the story. McKnight was able to hold on to second as Perley, Lichty and Fornoro finished up the top five. Trytek slid out of a top five finish when a broken rocker arm sent him backwards in the waning laps.

McKnight’s teammate said of his fourth place, “It was a good day for the team with Dave finishing second. My hats off to him. It was a tough track out there today. It was really hard to pass cars. It felt like every line I needed, somebody else was in it and they needed it too. Once I got by Davey Trytek for fourth and I had an open racetrack, I could use the whole track and it felt much better. The car was really coming in then but by that time it was lap 48 and we only run 50 lap races. So, hats off to everybody. Everyone did a good job.”

And defending race champion Fornoro had this to say, “We needed a little more wedge in the car. We’re still trying to get our balances the way I would like them. Danny and the team have been really good. I’m happy we had a fifth place finish and I’m totally ecstatic about Bentley. Sixty-five years old and I’m fifty. You know what, these young guys gotta keep on the high side and keep their stuff in one bag. I’d like to thank the sponsors and the fans for coming out. We had a pretty good crowd for a Sunday afternoon!”