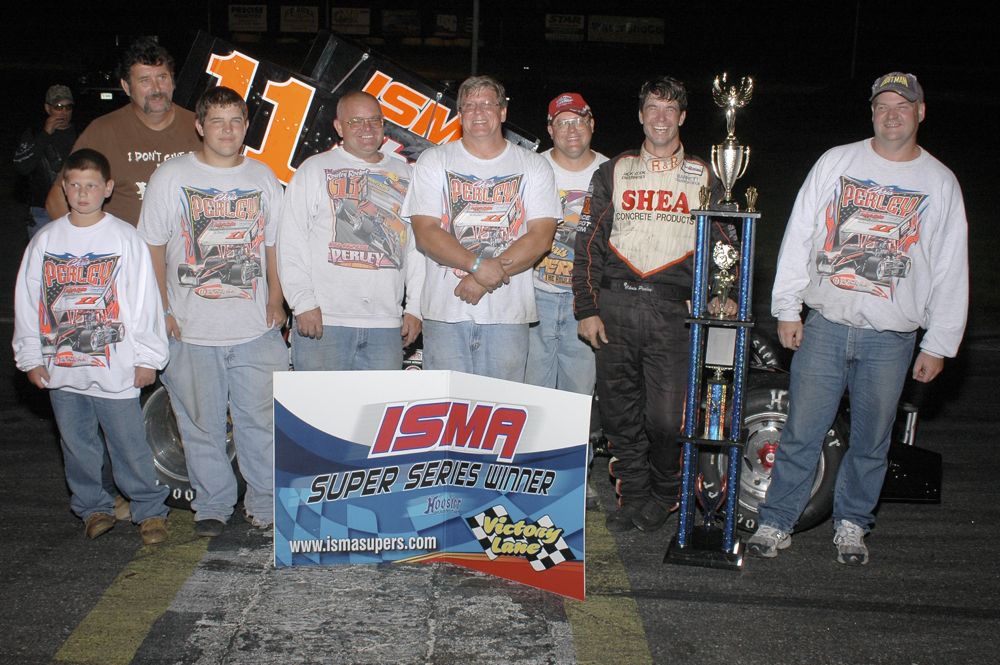 Epping, NH – The new 100-lap green flag format for the 43rd annual All-Star Classic may have resulted in one of the most exciting races in recent times here Saturday night. After a shaky start, the century grind developed into an awesome –almost indescribable battle between Chris Perley and Jon McKennedy for the win. For almost 60 laps they fought tooth and nail out front. In the end Perley took home the trophy but it was the road to fruition that led to the prize that brought the most gratification.

“I’ll tell you what,” said Perley after the duel. “I’ve had a lot of races and running with Jon like that was just a blast.”

Perley, starting 11th after handicap of the top 12 time trialers, worked his way past second place Craftsman Truck star Johnny Benson Jr. on lap 39 to begin his pursuit of leader from the start, McKennedy.

Chris described the ensuing laps. “We were right wheel to wheel a bunch of times and he kept holding out and coming out with the lead. I knew I could catch up with him again but I didn’t know if I could ever be able to catch him and get by him because we were tight. Staying on the inside of him and not hitting him and him not hitting me, he pinched my car down and I just couldn’t quite clear him. That just made it a blast. I had just a good time. I’d race with him any day.”

The wing king as he has been dubbed talked of his third prestigious Classic as his most “different”.

“The first one we led all 200. The second one we lapped the field and this one we just came out ahead. I guess this one was the most fun because it was a hard race and I didn’t know whether I’d get it. Of course my crew gave me an awesome car tonight. They didn’t give up. My family and friends sat in the stands throughout this whole thing, watching and dealing with kids and everything. I couldn’t do it without my family, friends, sponsors and everyone. I had a blast running with Jon. I just can’t say enough about him. He’s going to get one and I thought it was going to be tonight. The race played in my favor a little bit. I think perseverance paid off.”

McKennedy, who divides his time between modifieds and supers affirmed Perley’s perspective of the race.” It was an awesome race. We had a problem with the car in the first half of the race and once the fuel burned off we got tight. On the long runs it would come back in. But Chris has been phenomenal the last year… he’s been on fire. Congratulations to Chris and the whole Vic Miller team. They work hard and they deserve it. I’m happy with second”.

Another Classic story to tell was that of Lou Cicconi’s run in the Wentworth 10, his second run in that machine, the first of which produced a win at Waterford. Cicconi started ninth, had a run through the pits on lap 4 and never skipped a beat back up to third.

Lou told it this way. “When one of the car spun out on lap 4 I hit the back of the 28 car and the left front shock was broken off. It was stuck in the tire. I was trying to get someone to take it off but I couldn’t get anyone’s attention. So I just kept running and got back up to third. I think the green flag laps helped the race. The cautions really hinder the race if anything. It might have cost me tonight. I didn’t really pit. I just took a long cut. A third for my second time in this car is awesome. This car is like driving a Cadillac.  It’s such a good car. Anybody could drive this.”

Time trials and two consolations and some provisionals put 26 cars on the starting grid on the small New Hampshire bullring for Classic number. McKennedy and Dave McKnight held the front row as the green dropped with McKennedy taking the point. Laps 4 to 8 saw a series of cautions, as the pack seemed to be jumbling on every restart. Jeff Holbrook, Cicconi, Jeff Abold, Eddie Witkum Jr., Joe Gosek, Dave Shullick Jr. and Bob Bond were all among the affected. Some made out okay, some did not. But not counting cautions may have been beneficial.

Said Perley later in regard to the green-flag format, “I guess it must have played a part in it. We must have gone close to 200 laps total. I think it gives everybody a chance to get back in it. Louie was able to go in the pits and come back up to third He had a great run. I think it kept everybody in the game. I think cautions counting on a little track like this hurts the race. I think tonight the green flag laps helped out everybody.”

After the lap 8 restart, McKennedy, McKnight, Johnny Benson and Mike Lichty were able to establish a top five with Mike Ordway Jr., Perley, Russ Wood, Eric Lewis and Bobby Haynes the next five. Moving up quickly was Lou Cicconi after his “long cut” through the pits.

Benson, fresh off a second place at NHIS in his truck, moved into second on lap 12 while Robbie Summers, a mod competitor at that track, left the field.

Lap 14 saw a slowdown once again as Dave Shullick Jr. slowed his 61 on the backstretch. Joe Gosek returned to the fray at this juncture after being affected by an earlier yellow.

McKennedy was not shaking Benson as the next eight circuits went green, but yellow came for Joe Gosek on lap 23, which was his demise. Also calling ofn was Shullick while McKnight pitted and returned to the tail.

Lap 27 saw Perley taking Lichty in turn one and heading for Benson. Yellow once again bunched the still strong field on lap 35 for Tim Adams who had an errant nose wing on his 76. It flew off on the slowdown, fixing the problem.

Under green again, Benson would soon fall to Perley’s pursuit of McKennedy and Johnny dropped back to third to contend with Lichty, Wood, Ordway Jr. and Cicconi.

Perley was able to stick the 11 right on McKennedy’s bumper and the chase began as traffic approached. But, another couple yellows on lap 46 slowed the event affecting Witkum and Holbrook. Both continued.

It was McKennedy and Perley up front and Benson in third a couple car lengths behind. Cicconi and Wood were challenging Lichty for fourth. As the clocked ticked to 50 Wood took fourth, then third on lap 53 as Benson and Cicconi stuck right with the 29.

With 40 to go, McKennedy and Perley slid into high gear as they went high and low through the field, sparks flying. Perley would dive low only to encounter an obstacle. McKennedy came out on top of the squeeze plays time and time again.

On lap 71, while the 79 and 11 played cat and mouse with a lap car of Bob Bond, Cicconi got by Wood for third.

Lap 78 gave everyone a chance to breath when yellow fell for the 28 of Eric Lewis. McKennedy and Perley had just come side by side up on Vern Romanoski. Vern got bounced a bit up the track and Perley took the lead by a foot and that’s the way they crossed the line when Lewis flew the flag. In a secondary event, Bobby Haynes Jr. stopped out back with a fire on his 44. Hot oil spewed on his feet and he jumped from the car. Red was called while Haynes was attended to. Refueling was allowed.

The race now went green for the next 21 laps with Perley the new leader. McKennedy dropped back a bit as the track was clear in front of “the Rocket” out front. Cicconi gave Jon the competition now for second while Wood and Lichty stayed top five just ahead of Benson, Ordway Jr., Santos, Martel and Sammut.

But, the memorable race wasn’t over quite yet. A couple side-by-side lap cars held up Perley with ten to go. McKennedy made another attempt to get back his lead in those waning laps but green finally fell for Perley with one lap car in between his 11 and the 79. Cicconi had a magnificent run for third with Wood and Lichty the top five.

Multi-time Classic winner Wood said, “It wasn’t a bad night. We had a good car during the day. I thought we’d have a little better race setup. We were too tight. We fought for fourth, which wasn’t too bad. The guys up front – Jon and Chris put on a good show. I thought we were gaining on them in the last part of the race. We had a fourth place car and we finished fourth.”

Lichty, who set fast time of the day with an 11.222, was happy to finish after some recent dnfs.  “The run was better than the last four races we’ve run. The car stayed in once piece. It was kind of a tough night for us. Getting quick time was good, but we just missed it a bit tonight. I don’t know what went wrong. We were just so, so tight. We couldn’t make any headway on Johnny or anybody else in front of us. At the end I got by Johnny there. Congratulations to Chris and everybody else that ran up front. The race was good although the start was a bit slow getting going. I’d just like to thank my father and everybody else at PATCO Transportation and Stage Door and the whole crew for helping us out this weekend.”