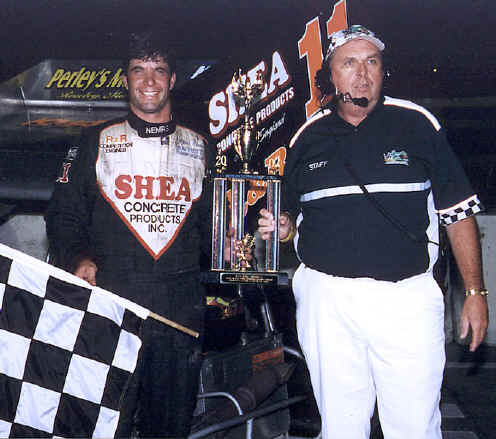 Peterborough, Ont. – Chris Perley took the race lead from Lou Cicconi on lap 48 of the ISMA 75 lapper at Kawartha Speedway on Friday night and went on for his third win of the season. More importantly, after a disappointing finish at the Star Classic the previous week, the “Rowley Rocket” put the Vic Miller 11 back in contention for the ISMA point title with the $3,000 victory.

Coupled with a crash and eventual 19th place finish by current point leader Russ Wood, Perley, now trails Wood by 23 points, with three races remaining in the 2002 season. Lou Cicconi and Dave McKnight are still in it also with 1275 and 1271 respectively. Friday night lap traffic played an important role, as both leaders readily admitted.

“The car was a good car,”said Perley.. “We worked hard. We’ve had a couple bad finishes running up front. It was nice to finish one. With lap cars tonight, I don’t know how we finished-between Louie and I just trying to get through them. I think this was the hardest race I’ve ever raced with lap traffic. Also there was no outside groove. It was just a tough track tonight. I think Louie caught me there in lap traffic and then I went up high. in the

marbles the same way I passed him. And I said, Oh boy, here we go. Because when I got up high, I couldn’t get on the gas, then into the next corner I can’t get on the gas because it took that long to clean off the tires. I think Louie and I had the same car. I talked to him afterwards. It was a good race. We raced clean. This helped in the points. We’ve had 4 dnf’s this year and you don’t want to get back up there by someone else wrecking. But, we’ll see. I didn’t think there was much of a points battle after last week. Tonight worked out, but tomorrow who knows. The shoe may be back on the other foot.

Lou Cicconi, who took the lead on lap 4, from John Payne, filling in for Jon Gambuti in the Budnick 88, looked to have a third season win under his belt until Perley got by on lap 48. Lou was able to come close to Perley on several occasions in traffic, but couldn’t take the cigar. Lou indicated after the race was over, “It was a good race. Perley did a good job. He earned it. We did good. It’s about time we felt like we were racing for a change. Traffic was a real problem tonight. There was no respect in the traffic department. It was the worse I’ve seen them all year. There is no track out there, especially in the high groove. Perley did it. He did a good job. You can’t take it away from him.”

Ken Bell, starting ninth in a pretty much rebuilt Soule 32 after a bad accident at Oswego’s Classic on Sept. 1, was all smiles after finishing third. “It was a tough race,” said the Pennellville, NY driver. “We were quick. We just tried the top a couple times and everybody went back by me. We were picking them off. Greg and I were coming up there and it looked like McKnight ran out of fuel and he hit him. I was fortunate enough to miss him and we ended up third. The guys have worked really hard. We tried to get to Star but the car was wrecked too bad after Oswego. They worked real hard all week. They put a good car underneath me. They got it all straightened out. It was real quick in the heat and we were real good in the feature. So, now it’s in one piece and we’ll go to Cayuga and hopefully we’ll run just as good tomorrow.”

John Payne grabbed the early lead off the pole, but a storming Lou Cicconi moved quickly by Payne for the lead trailed by Jamie Letcher, and Joe Gosek. Cicconi pretty much dominated the running as Gosek moved into second trying to keep the 75 in sight. Traffic was already a factor by lap 25 as Gosek, John Payne, Chris Perley, Scott Martel, Letcher, Dave McKnight and Greg Furlong were trying to move on up.

The first race yellow in the fast-paced race came on lap 33 when Rod Sauder’s 76 stopped off turn two. Sauder was into the pits and out of the action. Cicconi had a multi-lap car cushion over second place runner Perley when the green dropped. Perley had moved around Payne and Gosek for second in the two laps prior to the yellow.

Yellow flew again on lap 38 when the 14 of Scott Martel suffered a broken rear while the 91 of Larry Lehnert stopped on the backstraight.

Once again Cicconi held the advantage over Perley of several cars but the gap was closing. Randy Ritskes, now driving the Lane 9, was battling John Payne, Joe Gosek, Dave McKnight and Russ Wood for third on back.Perley had two lap cars in between his 11 and the 75 just past the midway mark. Then it was one, then it was none. On lap 48 Cicconi got high and Perley went underneath for the lead.

A yellow shortly thereafter flew for Jamie Timmons who went pitside. Perley powered away from Cicconi for a couple laps until yellow flew once again, this time for the 2002 Oswego Classic winner Joe Gosek and the 2002 Star Classic winner Russ Wood. Gosek and Wood tangled when Gosek “just got in too hard and ran into Russell” Joe would say later. Both cars were damaged beyond quick repair with Gosek’s 26 receiving the brunt of it.

With less than 25 to go, Perley and Cicconi gingerly wove through lap cars as McKnight, Furlong, Payne, and now Ken Bell were doing likewise. A crucial yellow fell on ap 72 when Brad Lichty and Jeff Holbrook touched in turn one.

The restart allowed Cicconi to gain an advantage on Perley while McKnight, Furlong, Bell and Payne closed also.

Just into lap 74, McKnight’s 94 slowed suddenly apparently out of fuel. Furlong came into contact and the yellow, turned red for a fuel splash with green-white-checkered facing Perley when the track cleared.

Perley was up for the challenge on Friday the 13th. After two consecutive top three runs had ended in disaster for the Rowley, MA driver, Chris was ready for a win. Cicconi settled for second while Bell, after that horrific Sept. 1 accident, was third. Randy Ritskes and attorney Joe Grunda finished up the top five, the only cars in the lead lap.

Said Ritskes, after his first ride in the Lane 9, “I loved the fourth place finish. It was our traction control. It was all because of Tony. He invented traction control by screwing up the fuel injection or something. We don’t know how we did it but we did. It works good. It missed and it skipped really bad in the corners so we couldn’t spin a tire if we wanted to or we got through the corner good but couldn’t get down the straightaway. I’m real happy.”

Joe Grunda, who lives in Stone Mountain, Georgia commented, “I was happy because it’s a brand new car and it’s finally done. I’ve been working on it since I moved to Georgia in 1999 and it’s in Ohio. I don’t have much help and being in Georgia and not having access to the car makes it really tough. So, this is the first race that it’s finally all done and it did well. I had a very good time and it was good.”