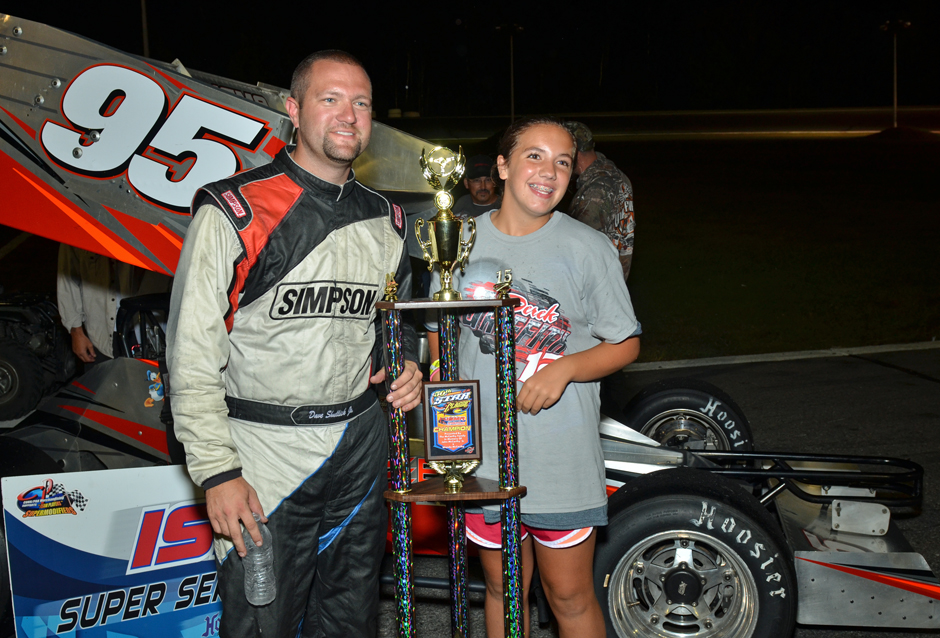 Epping, NH – In New England the Star Speedway Classic is the traditional “big” race for supermodifieds. In Ohio, the Sandusky Hy-Miler is its counterpart. At Oswego Speedway, it’s THE Classic. Combined, this trio has provided 147 years of racing excellence and excitement. Not many drivers have won two of the three. Only four drivers in all the years, have won all three. Ohio’s Dave Shullick Jr. now has won two and he’s going after number three. Saturday night at the famed ¼ mile bullring in New Hampshire, Shullick started sixth in the 25-car Star Classic field and slowly worked his way up to second place runner Dan Bowes as the two tried to keep sight of the high-flying leader Jeff Locke. Second generation driver Shoe II got the jump on Bowes to take second on lap 68 and then worked methodically up to Locke’s tail, passing for the lead on lap 90. The rest is history as they say. Shullick hadn’t really understood the meaning of winning the prestigious New England event when asked what the win meant. But he plans on finding out.

Dave walked through his race from his hauler. “The one thing I tried to do all race is not use it up. I tried to be really smart about it and not wear it out. I didn’t even force anything, even with lap cars; just tried to be really smart. It’s funny because we’re from Ohio and Sandusky is our big one. For most of the guys out here, the Star Classic is their big one. I don’t even know what it means to win this race yet. I need to talk to some people around here to understand the history of this race. But, still it feels pretty awesome. This is the third leg of the supermodified triple crown. I have a two of them now and hopefully we can get that Oswego Classic one day. I won’t even talk about a championship yet until I run the numbers. I don’t want to count my chickens before they hatch!”

While Shullick was cruising the Star oval, picking off cars as he went, a distance away a couple of cars were battling for top five spots. Jeff Abold of Baldwinsville, NY, started 12th and moved into second on lap 115 passing some heavy hitters in Mike Ordway Sr and Chris Perley along the way. But Abold was not completely surprised by his achievements. He knew his car was capable. And he’d been on the podium before.

“We struggled when we first got here. We just kept working on everything and even today we weren’t the fastest car through qualifying but the car is just as solid as it’s ever been. During the race the car just seems to come alive right around the half way mark, just before lap 100. We can take it from there. Some guys start falling off and here we are. It’s just a phenomenal car. This is our second podium here and the fourth year in a row in the top five.”

Third place finisher Canadian Mark Sammut, was however, a little surprised at finally finishing well in the Classic. It was something he had not done before. “We weren’t good all weekend except in the race. At the beginning of the race we were spinning the rear tire too easy and I thought we weren’t going to last. I tried to baby the tires for the first part of the race trying to hang on to it. Once we got into a bit of clear traffic at the end, I started to pick it up a little. We were getting around pretty good especially when I had the track to myself. It was a little tough in traffic, but we were lucky to be able to pass some good cars. We’ll take third place in the Star Classic any day. It’s a good run considering we started 17th. This is our best finish by far here. We had a couple good shots at it when we were running in the top three or four in the past, but something always went wrong and we didn’t finish. Any time we did finish we were usually a couple laps down.”

As has been Star tradition, the top twelve in time trials were handicapped for starting spots while the remainder of the field lined up according to their times. Only the 00 of two-time Star Classic winner Joe Gosek, who crashed heavily in practice, did not make the starting field.

Jeff Locke and Dan Bowes headed up the 50th running of the Star Classic in front of a huge crowd of fans on hand for the historic event, and it was Locke who vaulted to a commanding lead from the drop of the green. By lap 6 he was lapping at the tail of the field and began to put cars a lap down. Bowes stayed in touch back in second with Timmy Jedrzejek, Eddie Witkum Jr, Mike Ordway Sr, Shullick, Chris Perley, Mike Lichty and Jon McKennedy the key players behind Bowes.

The first yellow came on lap 20 when the 51 of Dave Duggan slid off the track in turn three. Brian Sobus, and Jamie Timmons pitted here with Sobus and Duggan out of the action.

At the drop of the restart green, Locke continued to eat up and spit out lap cars as he went along. Bowes continued to hold second fighting off Jedrzejek, Witkum, Ordway, Shullick, Perley, Lichty and more.

Yellow fell again on lap 34 for a spin by the 7 of Tom Tomberello. He restarted behind Mike Netishen and Jamie Timmons, who had pitted and returned.

The race went clean green for a spell allowing Locke to move farther out in front and Timmy J to swap second place with Bowes as Witkum, Ordway and Perley were just behind.

The racing came to an abrupt halt on lap 44 when the 28 of Eric Lewis went full bore off the third turn and into the trees in the distance. Red was dropped immediately and a round of applause went up when Lewis emerged from the car with no injuries. The car, however, would take some time to be unwrapped from the trees and brush so a refueling was allowed while the safety crew did their work. During the time fourth place runner Eddie Witkum’s wing was checked over and declared safe to continue but it would ultimately cause him to leave the race.

Back underway, Locke had two lap cars between his 37 and the second place 25 of Bowes who had one lap car wedged in behind him and Jedrzejek. Shullick was on the move as he came up to challenge Timmy J for third.

Mike Lichty’s 84 slowed and moved into the pits on lap 53 with an apparent blown motor, causing him to loose some valuable points in the title chase. He had come into the Star Classic sitting second in markers behind Shullick. Trent Stephens was in and out of the pits in the meantime as was Tomberello.

Locke took off again on the restart with Witkum pulling out of the action several laps later, giving up fourth to Ordway. It was Shullick, Timmy J, Ordway, Jon McKennedy and Perley next in line.

As the counter ticked to the 63 mark, Jeff Abold’s 05 was coming alive as he passed by Rob Summers and headed for Perley. Mark Sammut was following Abold on his march to the front.

Shullick moved past Bowes on lap 67 and now headed for the elusive Locke. It was still Bowes, Jedrzejek, Ordway, McKennedy, Perley, Abold, Sammut and Summers fighting for position as the race passed the halfway mark.

Yellow dropped on lap 80 for the 49 of Danny Shirey, stopped on the front stretch. He was pushed to the pits, and done.

Locke did not need the caution as it put Shullick right on his tail now with no lap car cushions. The two ran nose to tail for many laps as Shoe tried to find a way around, but who also knew he had plenty of time.

On lap 90, Shullick found his way and passed by the 37 for the lead. He would soon be gobbling up the slower cars in the field as the laps flew by. Locke, still in second, got caught up by one of those lap cars Shullick had passed and suddenly the 37 crashed into the wall under the flag stand, ending his great run in a shower of sparks, much to the dismay of those rooting for the “hometown guy”. The disappointed Chester, NH driver said later, “We had a good run going early. Just kind of going half throttle, riding around. Then we started getting loose about lap 90 or so and Shullick got by us. I was picking off lap cars and got to the outside of one and he didn’t see me I guess, so I have wrecked race car again this week. Two weeks in a row. I really hate it for my guys. These guys work really hard to put this thing together for me. The give me a good, competitive car. Brian Allegresso, Doc Hathaway, and Jerry Martel – these guys work so hard and I really feel bad for them. But, I know we’ll get it back. We run good at Thompson and we’ll go get ’em then.”

Shullick continued as the front runner on the restart of lap 110 as Abold moved in on first Ordway and then Bowes to take second on lap 116. Ordway soon put Bowes into fourth with Perley and Sammut now on the move as the race wore down to the finish.

Soon some of the key players in the top ten were faced with becoming lap cars themselves as Shullick cruised by Bowes, then Summers, and more. On lap 127, there were no less than seven lap cars between the Bodnar-built 95 and second place Abold, trailed closely by Ordway, Sammut and Perley.

With ten to go in the 150-lapper the 95 moved in on fifth place runner Perley but moved up no farther before the checkered flew, leaving Abold, Sammut, who had passed Ordway and Perley the top five and the only cars remaining in the lead lap.

Ordway, who once again was driving the Clyde Booth 61, finished fourth after a couple non-racing years. The legendary Fremont, NH driver chuckled when asked about his finish. “Action speaks louder than words they say and in this case they are right. Mike said simply, smiling all the while, “The car was pretty good. I had a lot of patience out there. I haven’t raced for two years. I figure that’s pretty good. I passed some cars. I made it to fourth. I’m pretty happy.”

In fifth for the second time in two weeks, was Chris Perley. Still vocal about the team’s tire struggle, he said, “The crew worked their ass off all weekend long. We changed everything. We are still trying to chase the tires. Unfortunately at least the first half of the race showed that with everybody running in line. It makes everybody mental. You start to see cautions because everyone is looking so hard for that spot and it’s because we’re running on hockey pucks. I’m sorry, but we are running on hockey pucks. But, the Shoe has it together. Awesome. It was a great job for them. They are the ones to beat. But, the tires are killing everyone. If we get a tire we could put on a good show, without this flaying around and spinning the tires.”

ISMA concludes its season at the Thompson Speedway Motorsports Park, October 16-18. After the Star Classic, the points should show that the championship is still up for grabs.