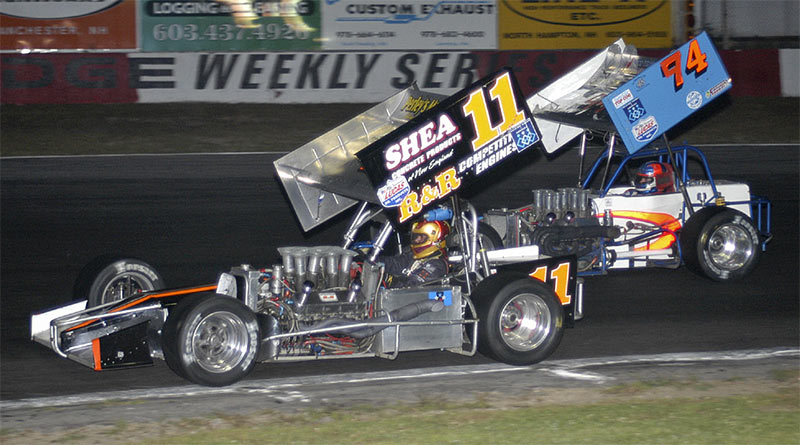 Epping, NH – Russ Wood seems to have that special knack at Star Speedway. He instinctively knows when to stay and when to go in the long race. He proved that for the third straight time Saturday night at the 39th annual Star Classic 200, a race full of uncertainty. But, then he also felt that he had a little extra help as the late Paul Dunigan might just have been guiding from above. Wood’s savvy was evident as he ran, and waited in the top five until past the midway mark. And then with some attrition in front of him, he patiently waited to track down leader Nokie Fornoro and to pass on lap 160. One further slowdown on lap 180 saw Fornoro closing in to retake the point, but Wood was able to pull away on the restart leaving Fornoro to fend off the late challenges of Joey Payne for second. Wood gave this description of his fifth win which left him in sole possession of the second place spot on the All-Time Stat Classic list. Only Bentley Warren has more wins of that prestigious supermodified event with six.

Said Wood in post-race interviews, “Last night (at Lee) I ran a little too hard and I ended up losing the lead due to tires. Tonight I just wanted to feel out the car. The car felt really, really good. I was just cruising there, keeping the leaders in sight. The guys began to slip and slide and one by one I picked them off. The car was flawless. It would do whatever I wanted it to do and I didn’t really even have to run it that hard. The team gave me an awesome car. We’ve struggled a lot this year. This my fifth Classic? That’s great. I guess all I can do now to go is to go for a sixth. My thanks to my crew and my sponsors for this win.”

Were there any nervous moments for the winner in a race full of uncertainties? “I only had one little scare when the 70 got loose in front of me and I thought he was going to end up in my lane. It worked out and he got under control. That was the only time. Other than that the car was really great in traffic.”

Was there a game plan for the Classic? “That depends, continued Russ. “Some years I’ve waited and some years I’ve gone. After last night I decided to wait a while. I just felt that it was time to get going. The car felt good and I picked up the pace. I saw Mike Ordway had spun out there and I knew he wasn’t a factor. I was worried about Nokie, Chris and Joey Payne. I knew they were running good. I was just waiting for one of them to show me a wheel but it never happened. I think Paul (Dunigan) was riding shotgun tonight. He was driving with us. I’m sure he was watching over us. We really needed this. If there was any race this year we had to win, this was the one. I love running here. It’s local. It’s kind of like our home track. I love the fans here. It’s just a great place to be.”

Nokie Fornoro, who has never won a Star Classic, made a fighting attempt at getting number one when he took over the lead from Justin Belfiore on lap 80 and held that spot surviving a spirited challenge by Belfiore for many laps before Wood took the point. Nokie said later, “We worked with the car quite a bit today. We changed a lot on the car and Danny and I worked really well today. It goes to show that two heads are better than one. I had the car. I should have changed some wedge before the feature. I had to take off pretty quick as Justin was going pretty quick and I wanted to stay with him. Russell caught me there. I wasn’t sleeping but just trying to be easy with the right rear tire because the car was loose off two and four. It showed. I didn’t need that last caution because I think I could have got him in traffic. But, on the restarts you saw what happened. He just took off. He was the class of the field. I congratulate Russ. The year wouldn’t be right without Russ Wood winning a feature and being a champion as many times as he has for the Dunigan team. I’d like to thank my team and Mike of Helping Hands of America.”

Joey Payne, who started thirteenth on the field, was also aiming at a first-time Star Classic win, but he was doing it most of the race without front brakes. Joey was exhausted, but happy, with his podium finish. “I’m worn out. We had a really good car …more than what it showed. At lap 30 I’d say something came up and ripped the brake line off the left front. I drove 170 laps with just rear brakes. There was just nothing there. I couldn’t drive in deep because it would lock the back brakes up. I just had to feather it in the corners. Just drive slow. We survived. I have to thank my sponsors Pynn Masonry, Shadow Race Products – we had awesome shocks today, and my dad. We just have to get some good maintenance on the car and keep some things on it and we’ll be good,”

The top sixteen time trailers were locked into the Classic field with the top ten handicapped for position. Justin Belfiore and Bentley Warren started the 200-lap grind on the front row with Belfiore taking up the front spot. Belfiore, who has had some great runs go sour of late, was embarking on another attempt to make one stick.

Yellows flew, as they always do along the way with one on lap 17 for the 98 of Jamie Moore and one on lap 29 for a Jamie Timmons’ spin. But on each restart, Justin pulled his number 8 away from first Bentley and then Nokie Fornoro as the other played the waiting game.

The race moved green for a long length allowing Belfiore a comfortable lead, but Fornoro was methodically massaging his tires and also moving up to Belfiore. Traffic, has always, played a key role and Fornoro soon was within striking distance of the leader. Nokie took the front spot off turn two on lap 80, but Justin did not give up the coveted spot easily. As Fornoro took his car in and out of lap cars, Justin moved with him and on more than one occasion, Justin even nosed ahead of the 32 as they diced around cars. It was a torrid battle waged well past the midway mark. Bentley Warren, in the meantime, kept a solid third with Mike Lichty, Russ Wood, Rick Wentworth, Chris Perley, Joey Payne and Dave McKnight all keeping the leaders in view.

The next yellow fell for the luckless Belfiore as he spun the 8 wildly on the back straight. He would pit for good out of the race around lap 126.

On lap 130, the flag flew again for Wentworth, who was running near the top five. Something broke in the rear end sending the number 10 out of what might have been the Haverhill driver’s best Classic finish.

Green fell on lap 138, but yellow flew once again after Dave McKnight and Mike Ordway brushed with Ordway recovering and going to the rear, but eventually pitting.

Green fell on the field at 145, and eyes switched from Fornoro out front to Russ Wood, who had quietly moved into second with a lap car in between the two. Bentley’s 25 soon fell victim to young rookie Mike Lichty, who was running a veteran’s race. Joey Payne put Warren into fifth by lap 155.

The waiting game was over for Wood on lap 160 when he stormed by Fornoro on lap 160. Nokie laughed later and said, “I thought I could hold him off and all of a sudden he was by and gone. I said to myself, ‘sure you’re going to hold Russ back.’” Joey Payne pushed by Lichty to gain top three status by lap 164 as Lichty, Warren, Perley, and McKnight were still in full racing mode.

The yellow on lap 180 for a spinning Jamie Timmons was the last slowdown Wood would have to survive from. Taking advantage of the yellow was Dave McKnight who moved by Chris Perley for fourth as a three-way fight for third began to materialize in the waning laps.

Wood had an easy trip under his fifth Classic checkered, but out back Payne was all over Fornoro in an attempt to wrest second away. A short distance back Perley and McKnight fought for the fourth spot and as the two approached a lap car on the last half of the last lap, a three-wide attempt by a lap car sent Dave spinning out into the marbles above turn four. It would be Wood, Fornoro, Payne, Perley and Lichty at the checkered.

Said Perley afterwards, after a good finish for the Vic Miller team, “Tonight, on lap two I was loose and knew we were in trouble so we just hung on. To finish fourth was great. We had an incident with McKnight at the end and I hated to see it because you never want to put a person in a predicament. I don’t know who hit or who put who where but we went three wide in the third corner coming down for the checkered flag and McKnight got bumped out. I was outside Jamie Letcher and McKnight went for the spot and got swung around. We just didn’t fit. To end up with a top five was good. Tonight – you probably could call tonight the first points race because if we weren’t in the points I probably would have pulled out because the car was terrible. But we just waited around and ended up with a good finish. Hats off to Russ. We’ve all said he was due. Of course he has to win one of the biggest races, but it’s also third in a row for him. It’s great for Russ. And Nokie needed a good run, as did Payne. It’s good to see some new people in the top three and for me to finish in the top five at Star. The crew gave me a good car, which didn’t break. A top five is good.”

Young Mike Lichty, who might not appreciate fully what it is to survive a Star Classic 200 and be in the top five in your first-ever Classic outing, indicated later, “We ended up fifth last night and fifth tonight. We’ll take two fifths in two days anytime. We weren’t very good coming into today, but then set fifth fast time in time trials which was decent and I was in the race for my first Classic. The car was a little too tight all night. We just kept going and it started to come around. With about twenty laps to go I got picked behind a couple lap cars and Dave got by me and Chris got by me. But all in all it was a good weekend.”