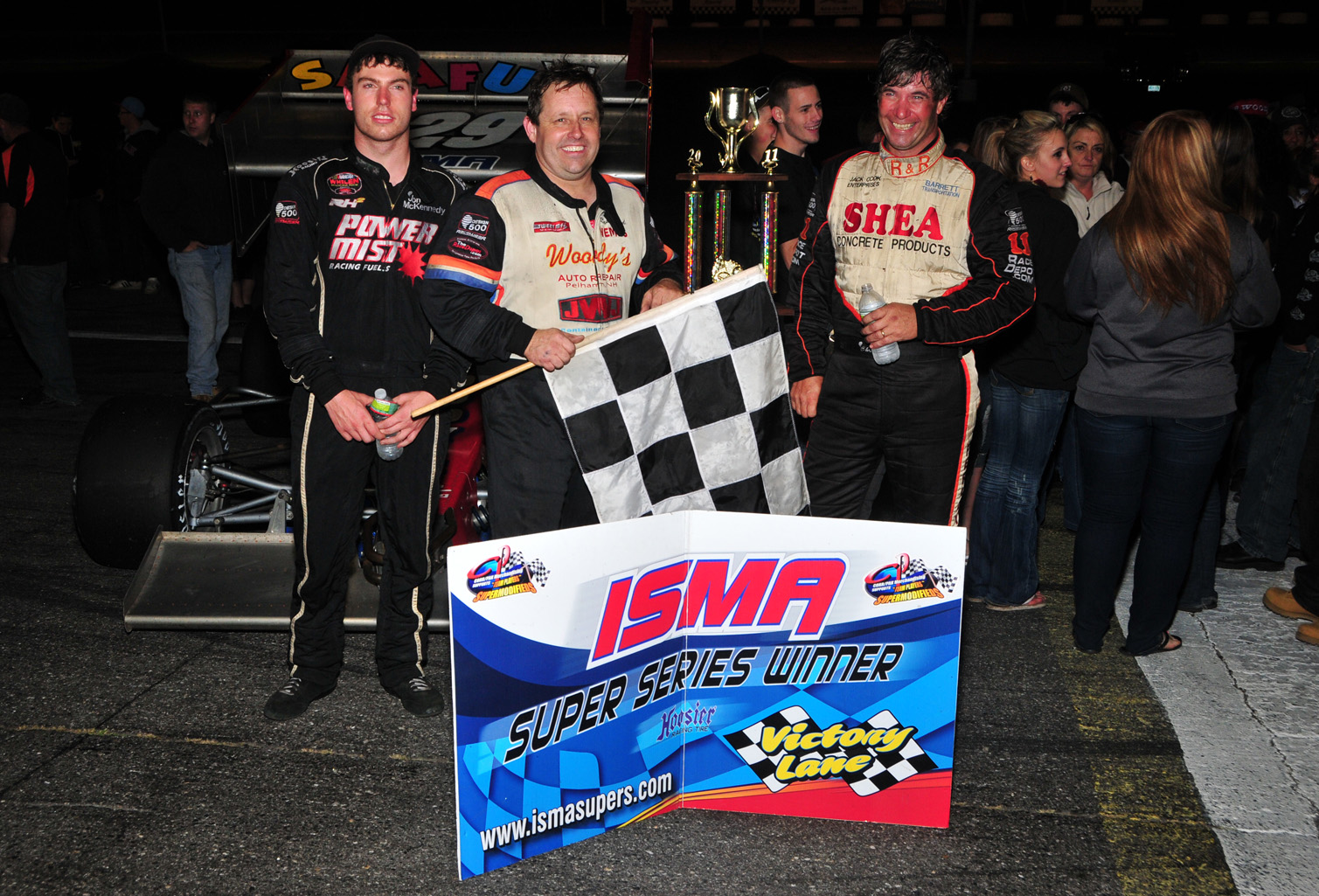 Epping, NH – A huge throng of fans turned out to watch the rebirth of the traditional Star Classic and they weren’t disappointed. It was a classic race!  And, it was a perfect day for Russ Wood at Star Speedway Saturday. He led all 150 green flag laps, collecting the lion’s share of the over $10,000 in lap money and bonuses, plus the $5,000 winner’s share of the purse. It had not been a great year for the Holbrook-Wood team until then, with a blown motor almost keeping Wood out of a race he’d won five times over the years.

Then a borrowed motor from fellow competitor Howie Lane, made it all happen. Wood, by virtue of time trials and handicapping, sat on the pole and he took full advantage of the position. Taking off with first his teammate Rob Summers, then five-time Classic winner Chris Perley challenging the entire distance, Wood was able to stay out front through traffic and cautions. It was a very big boost to what has been a declining season of late.

Russ, amidst a huge throng of well-wishers, said in victory lane. “I want to thank Howie Lane for our borrowed motor. Without that we wouldn’t be here. Thanks to Jeff Holbrook and the entire crew for working so hard, my parents and wife and kids  – everyone whose supported us this year. We’ve had an up and down year. This makes it all worthwhile.”

With a lot of lap money and a halfway bonus of $1,000 to give incentive, Russ mapped out his strategy. “I was kind of thinking lap money at the beginning. I knew Chris would be coming. I figured he’d blow right by me. But, my car was really not bad. We borrowed a motor from Howie and it was good on power. I can’t believe that we held off Chris. I knew when he got close. I saw the flashes from the cameras. I was just saying, ‘let me pull this off and help us make up for some of the year’. This is awesome, beating Chris and Jonathon. They were fast. Just beating them was something. And, to tie Bentley with six Classic wins is pretty special. It’s not a bad position to be in to be tied with him. I love racing here and I love this race. Thanks for everyone who came out to watch.”

The driver behind Wood for 100 of the 150 lap grind was Chris Perley, who also went into the race with five previous wins of the prestigious event and who was the opponent Russ feared the most. Perley was happy finishing second in a race he deemed as fun.

“This was a great run. I got tight early and didn’t know if it would get better or worse and it got worse. But, it was tough racing. I was able to stay with Russ for most of the race and kept him honest. Lap traffic was tough. It was a good one and a lot of fun. I’m happy to bring the car home in one piece and head on to the next shot. Congratulations to Russ. He did good. It’s nice to race with Russ. It always is. The track was fun, the crowd looked good… it’s nice to be back to the old stomping grounds.”

Taking the third podium finish was Chelmsford’s Jon McKennedy, who doesn’t race supers very often, but when he does, his record is an enviable one. He commented after his run, “We had a good run. We started twelfth and worked our way up to third. It was a tough race. We had a bunch of cautions and a lot of lap cars between every one. Overall it was a good day. It’s the first time we brought the car out all season. We set fast time and due to the handicapping, we had to start twelfth.

“I would have liked to win. This is my third Classic in a row and we’ve been close all three times. At the end of the race we had a pretty good car but it took four or five laps to get going after a caution. Once the tires got hot and the stagger shrunk down, the car would come back to life. Congratulations to Russell. He’s the master around this place. He’s raced here for many years. It’s good to see him win.”

Sixteen cars were locked in from time trials with the top twelve handicapped by ISMA rules. The consi finished lined up the rest of the field. With some bad finishes in the past few races, veteran Russ Wood and teammate Rob Summers made up the front row in the 24-car field. It was Wood taking the point from the green, a spot he would not relinquish.

An early caution for Ben Seitz slowed the pace but green flowed after as Wood and Summers tried to shake off Eddie Witkum, Johnny Benson and quickly up from tenth, Chris Perley.

Traffic soon came into play on the famed bullring as Wood began to lap cars by lap ten as Summers followed. Perley was third a distance behind the lead duo when yellow fell again on lap 22 for Dave Sanborn in the Lane 9.

The slowdown allowed Perley to close the gap on Wood and Summers as Benson, Witkum, Justin Belfiore, Mike Lichty and McKennedy threaded through the traffic left by the leaders as the race stayed green for a long spell.

Just before the lap 50 mark, Perley moved up on Summers as Wood was struggling with a trio of slower cars ahead. On lap 49, Perley became the nemesis for Wood and it would be all their ballgame for the next 100 laps.

Yellow flew again on lap 56 when Dave Duggan’s 51 was into the wall in four. Justin Belfiore pulled the 98 pitside at this juncture, not to return. On the restart of his mishap, Johnny Benson stopped the Lichty-owned 74 coming out of turn one and he too was out for the night.

Wood and Perley, two of supermodified’s greatest, showed the large crowd on hand, why they should be so named. The red 29 and the black 11 diced in and out of traffic in awesome fashion as they headed for lap 75 and an extra $1000 contributed by the fans who bought special 2011 Star t-shirts.  Wood picked up that bonus and then continued to tally at least $25 for each lap he led.

A spin by Eddie Witkum brought the intense action to a halt on lap 108. A red was dropped and due to the number of caution laps already run, refueling was allowed as the 97 was taken to the pits.

The race resumed with Wood and Perley now in a different time zone. Timmy Jedrzejek ran in third on the track, but was fifth in the rundown as he had just been gone down a lap prior to the red. Rob Summers and Jon McKennedy were the only remaining cars in the lead lap.

At the 120 mark, it was evident, that the winner was going to be a tiebreaker of sorts with both Wood and Perley tied for most Classic wins with five. Timmy J ran behind Perley in the 5th place spot with Summers third just ahead of McKennedy in fourth.

Lap 130 found Summers turned around bringing out the yellow and McKennedy continuing after tapping the 35. Summers went to the rear and the 79 held its spot.

A couple attempts at the restart of this lap saw a tangle between the 37 of Locke and the 17 of Seitz with Seitz done for the night. Then Locke pulled in as attrition increased. Another attempt at green found Craig Rayvals off in turn one but he was restarted at the tail.

The race finally got to green and stayed that way for the next 20 laps with no change out front as Wood and Perley stuck together, still slicing and dicing in and out of traffic. McKennedy held onto third while Summers was mired back a distance in fourth. Jedrzejek ran pretty much alone in fifth, coming across under the checkered ahead of the 35.

Summers said succinctly of his fourth.  “I’m happy for the whole team that Russ won. We needed that bad. Russ borrowed that motor from Howie and it’s really cool for him to win. We were off a little bit then we got tight. Then I got a little help and got spun around. That kind of sucked. But, hey we came back and finished fourth in one piece. I guess it was a decent day. Hopefully we can continue on for the next couple races.”

Ohioan Jedrzejek, who had not raced at Star for over a decade, was quite pleased with a fifth and his growing progress in the Soule 32. “We’re happy with fifth tonight. We started fourteenth after a qualifying run that we didn’t put down too well. I had to start back there in the pack but I knew right away we had a decent car. I just kept coming and coming. I was watching guys starting to slip and every time someone would slip a little, it would give me another spot and another spot. Unfortunately we got down a lap just before that red flag. And, then we were almost on a lap of our own there for a little while, at least the first car on our own lap. We just had to run it out and not give up any more spots. After the refueling and we got some heat in our tires, I actually felt like the car was pretty good again. We made it to the end and we’re happy to pull it in the trailer and get a fifth place finish. I think we’ve made some more progress on the setup as Danny’s been working on it pretty hard. I was pretty happy with what we had tonight.