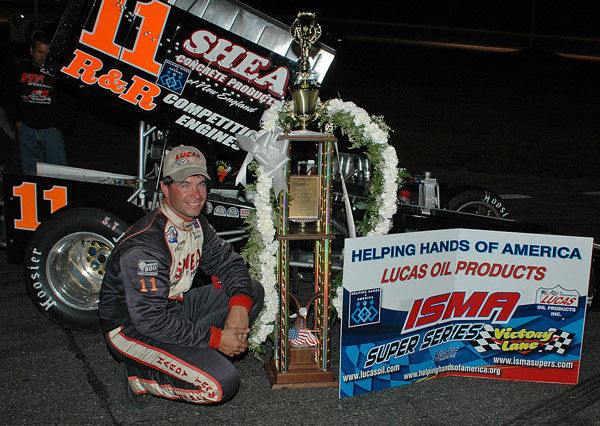 Epping, NH – To say that Chris Perley dominated the 40th running of the Star Classic on Saturday night would be an understatement. Smoking and spanking were just two of the verbs used by some running on the same track to describe the “Rowley Rocket’s” run to a second career-Classic victory. Perley came from tenth to second by lap 67 to dog leader Scott Martel. The pass for the lead was made on lap 78 and the rest was history. He sailed through the remaining 122 laps with ease, lapping the entire Classic field of 24, a feat only seen once before when the late Jim Shampine did it 25 years ago.

Perley was almost as amazed by his phenomenal race as everyone who watched it. “I can’t believe it. It’s been a long time since I won a Classic. We warmed up decent tonight. Got lucky in the time trial. The car was just awesome. Hats off to the crew and everybody. With Bentley in fourth, it was another good night for Vic Miller.”

Perley, who had set fast time in time trials, really had no inclination that he would win, let alone dominate the prestigious event. “I was really hoping for a top five. This track has been funny. Russ has been so good here. And now Pat’s In Russ’s car so now you’ve got two Russ’s out there. You can never rule out Ordway. There’s a lot of other good equipment out there. You never know who’s going to come back up through. I’m psyched. Anytime you win at this level is great. I’m not at the point where I expect to win.”

When asked how his second Classic win felt, Perley replied, “Second win? I still can’t believe I won it the first time. So the second time is twice as good. Any time I win anywhere is great but obviously coming back here to Star and a good hometown crowd here is great. To win at Star Speedway and put my name in the record book again with all the greats from Ollie to Bentley to Russ to Shampine and more is fantastic.

“I’d like to thank the sponsors – Ed Shea and E.F. Shea Concrete, R&R Engines, Perley’s Marina, New England Motor Racing Supply, Barrett Transportation, Hardy Transportation, and Jack Cook Enterprises -, the fans for their support and Vic Miller and the crew. For the last two weeks we’ve run two cars. And, sometimes it gets a little antsy. But everybody did their job. Both cars ran great. I can’t thank them enough. Nobody forgot anything.”

The 40th annual Star Classic got underway after time trials, which locked in 16 cars and a consolation, which took seven more drivers. A Star Speedway option gave Mike Badessa the last starting spot in the field. Prior to the start the drivers passed their helmets throughout the stands and collected over $2,100 for the victims of hurricane Katrina. Added to the tally was an unclaimed 50-50 from Lee Speedway of $603, for a $2700-plus donation to the Red Cross.

After the top ten in time trials were handicapped, Lou Cicconi and Mike Lichty were on the front row. When the green dropped Lou Cicconi showed the way but not for long as Scott Martel drove by Cicconi for the lead on lap three. Martel immediately pulled away from the pack, dropping a couple lap cars in between his 97 and Cicconi by lap 13.

The first yellow in the caution-counting race came on lap 23 when Bobby Haynes Jr. brought out the flag and ultimately pitted. A spat of slowdowns came consecutively as Jamie Letcher did a 360 off turn two and kept it going but a track cleanup was called for.

Just as the race was restarted on lap 42, Justin Belfiore spun on lap 43.

Martel still led Cicconi, Mike Lichty, Perley, Pat Abold and Russ Wood around the tight bullring on this green, but Cicconi was planted on his rear after the yellows.

One of the guys to watch for was Mike Ordway. But, he was out on lap 55. “The part that held the left front spindle on broke. What are you going to do? That’s racing. That’s how my luck’s gone this year.”

Green fell again on lap 61 with Martel and Cicconi still out front. Chris Perley put the 11 by Mike Lichty soon thereafter and began his pursuit of Martel. Methodically he worked on the Lane-owned machine and was by on lap 78.

Chris described his strategy. Lapping the entire field was not in his plan. “I picked my way up through. I ran behind Scotty for a while and it was a decent pace. We’ve found a lot of times that if you run a little slower than what your car really wants, you’ll use the tires up because you’re not going fast enough to transfer weight. Plus if you’re that close to a car, you’ll start to run out of their line, which isn’t always your good line. So, you end up hurting yourself. So, I knew that it was around lap 75 and it was a little early, but that’s when I went around him. Staying behind Scott meant I was using more brake in the corners and more fuel coming out, so I wanted to get out front and clean up my way.”

And, clean the way he did. Clean up was more like it. By the midway mark he had a half dozen cars tucked in between the Miller 11 and second place man Martel. The race stayed green and the crowd watched in awe as he worked his way up to behind seventh place runner Pat Abold. In front of Abold were Russ Wood, Lichty, Nokie Fornoro, Martel and Cicconi. On lap 129, Abold fell victim to the Rowley Rocket’s wrath. As the current ISMA point leader said later, “We got smoked by Chris Perley tonight. He was awesome. Ended up with a top three finish and we have three races to go. Points are important right now. Being conservative and finishing races is the name of the game from here on out.”

On lap 138, Nokie Fornoro, fresh off a Super Nationals win at Oswego, moved into second past Lou Cicconi, Scott Martel was fourth and Russ Wood fifth. By lap 144, Wood was down a lap and Perley was headed for Martel. Ten laps later, Chris was behind Fornoro and Cicconi had pitted with problems with the 75.

Perley was working on Fornoro when a yellow flew for a tangle affecting Jon McKennedy, Mark Sammut and Eric Lewis. Fornoro had to stop the 32 while Perley squeaked by on the outside. “I saw that crash coming”, recounted Perley. “I had my hand up to let guys behind me know. I still almost didn’t get through because they blocked the track. Going through the dirt isn’t any big deal but you never know what you might run over out there.”

As had been decided in the earlier driver’s meeting, no grace laps would be allowed and this cost Nokie laps here as he awaited a push as the laps ticked by. McKennedy was hooked and Mark Sammut exited the track at this juncture.

There were no further stops and no stopping Chris as he glided by lap cars on his way to victory. He still wasn’t sure he’d won until the last moment. “I was trying to keep track of who I was lapping. And, the only one I knew I had left was Nokie and he was in front of me. Then that accident happened. With 30 to go I knew that if I didn’t break and didn’t do anything real stupid that I’d probably come home. At about 150 I thought I’d gone too quick because I started getting loose. But everybody in front of me was loose too. The clincher was at lap 199. I knew I had it then. I could coast.”

At the finish, Perley crossed under the checkers a lap ahead of the whole field. In second was Russ Wood, a five-time Classic winner, third was Pat Abold, fourth Perley’s teammate Bentley Warren and fifth Scott Martel.

Wood said after the 200-lap grind, “We were just loose at the beginning. I couldn’t keep up with those guys. The car got better in the last 25 laps, but Chris was long gone. He had the best car tonight. He wasn’t even twitching in the turns. I was fighting it. I guess I’m happy with second. It’s in one piece.”

Six-time Classic winner Bentley Warren was still having fun after a great run at Oswego.

Bentley was smiling and simply said, “I finished fourth or fifth…whatever I got. Had a good car. It was fun being back at Star.”

Scott Martel was pleased to have led and to do well in front of a hometown crowd. “It was a good race in front of a lot of hometown fans. We led for a while. It was good to be out front. We wanted to be able to stay there, but it didn’t happen. Chris kind of spanked us all. I’d like to thank my crew and sponsors. We had a little bit of trouble with the car going away. But, all in all we had a good night and it’s on to Oxford.”