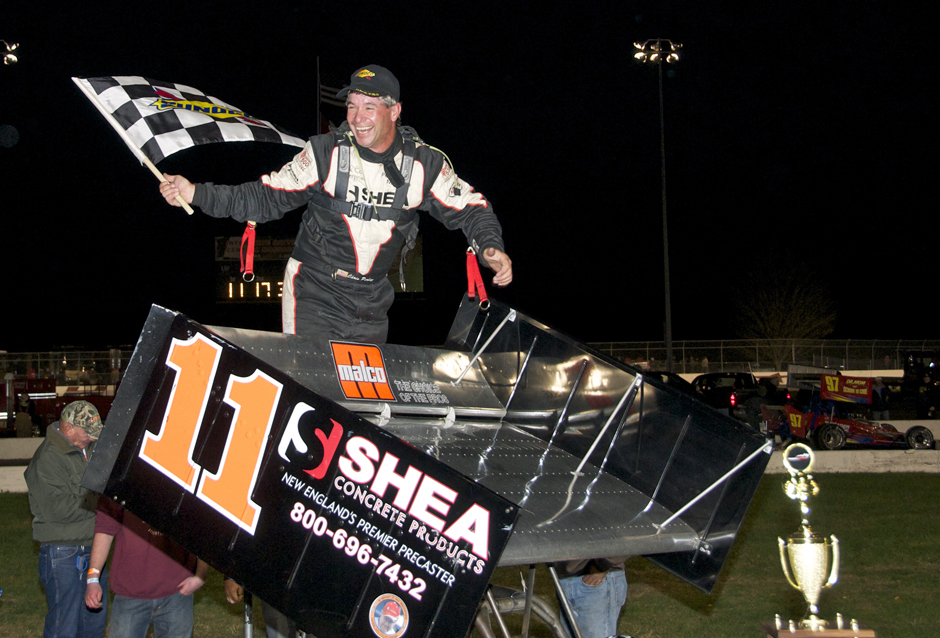 THOMPSON, Conn. — Ben Seitz entered the 2013 Sunoco World Series at Thompson Speedway Motorsports Park (CT) with an outside chance of winning the International Supermodified Association (ISMA) championship.  He would win that race, but come up short of the championship.

Fast forward one year to 2014 and Seitz found himself 46 points behind Jon McKennedy (Chelmsford, Mass.) entering the season-ending event at Thompson.  Only this time, the results were reversed.  He didn’t win the battle, but he won the war.

After starting in the sixth position, Seitz quickly entered himself into the battle for the race lead.  He would challenge early leader Jeff Locke on a number of occasions, but couldn’t make a move on the bottom to take over the top spot.

When McKennedy went up in smoke in turn three on lap 30, Seitz knew that he was in the driver’s seat for the championship and made sure he did a good job of “picking his spots” while battling for the race lead with Locke and eventual race winner Chris Perley.

“I didn’t see him pull off at first, I saw my crew guys telling me to be smart so I had a feeling something happened with Jon,” said Seitz.  “I didn’t really know what was going on, so I just decided to play it smart.  I tried to get Jeff on the bottom and I just couldn’t clear him.  On top of that, I knew I just needed to be smart.  I needed to finish and that was in the back of my mind the whole time.  Jeff and Chris are clean, but you still need to pick and choose your spots.”

“It’s obviously really frustrating,” said McKennedy.  “A whole season’s work, effort, and everything goes into the car.  All we had to do today was come out with a solid top-10 finish.  We were doing that and the motor just exploded.  It’s just really disappointing.  What are you going to do? It’s out of my control.  I’m out of words.”

The man known as “The Rowley Rocket,” Chris Perley, would go on to win the race after using a powerful move to the inside of both Seitz and Locke in less than a half on lap 41.  The win for Perley, who is widely considered as one of the most successful ISMA driver’s in recent history, is his first of the 2014 season.

“It was a long year,” said Perley.  I didn’t know if we were going to win this year.  That race was one of the fastest paced races we’ve ever had here (at Thompson).  I don’t know what anybody was turning for lap times, but I ran as fast as I could and still couldn’t catch them half of the time.  I just ran as hard as I could while trying to stay there.

“I figured for a while there that we may steal the win after they wrecked each other, but nobody touched anybody.  It was good, hard, clean racing.  We just were able to get away at the end.”

Bobby Santos, who started 27th on the field after qualifying was cancelled on Saturday, made his way to the fourth spot when the checkered flag waved and earned the Baker Steel Detailing ISMA Hard Charger Award.  Mike Netishen will also receive a hard charger award in memory of SFC Charles T. Briggs, USMC, for charging from the23rd starting spot to finish 10th.  Both drivers will receive $100 bonus checks for their performance in the Star Classic.

As is a tradition whenever the ISMA Supermodifieds are in town, a lucky fan in the grandstands on Sunday afternoon took home a free bicycle in the ISMA Free Bike Giveaway presented by H&S Prototype and Design, LLC located in Kalamazoo, Michigan.

The “Winged Warriors” of the International Supermodified Association will now go into hibernation until the 2015 season.  The 2014 ISMA Banquet will take place on Saturday, November 8 at the Turning Stone Casino in Vernon, New York.