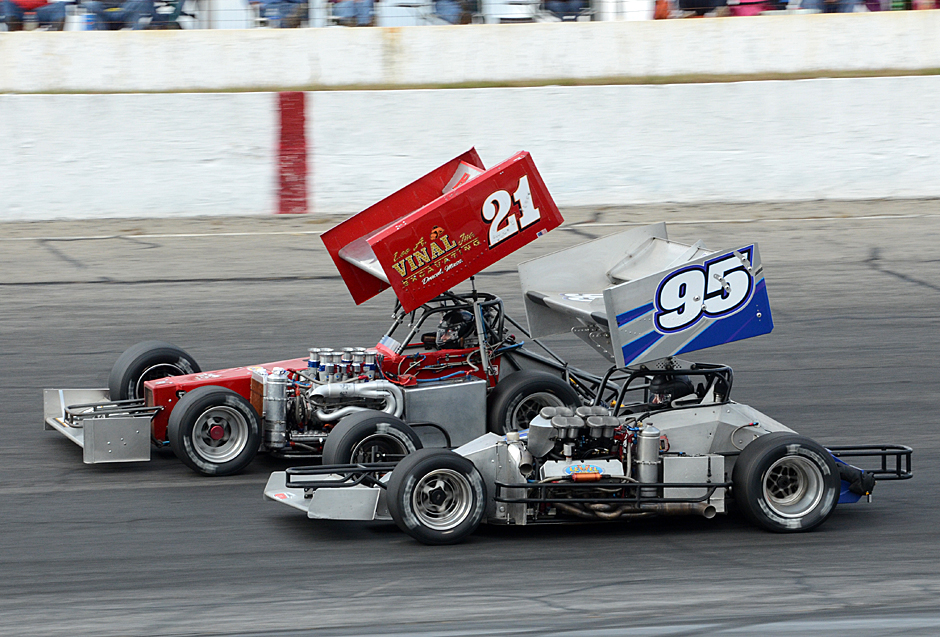 Thompson, CT – The battle for the ISMA championship was to be decided at the World Series of Racing on Sunday and when all the smoke had settled, 2016 ISMA champ Dave Shullick Jr. relinquished that title to Jon McKennedy, but he didn’t shy away from taking his third straight World Series ISMA win. While McKennedy and Timmy Jedrzejek fought side for side for a number of laps hoping to win a first ISMA crown, Shullick pulled by leader Chris Perley on lap 16 and proceeded to decimate the field while the aforementioned duo tried to out run each other to win the 2017 championship.

Shullick who had a dream year to say the least, not only one his third World Series 50 lapper but he was coming off an Oswego Classic non-winged win and an Oswego championship and a Star Classic win. It’s a year to remember for the second generation driver to say the least. Shullick had this to say of the storybook year.

“It’s just been an awesome year… one you think you could never top really. To finish it off with two winged wins and winning the Oswego Classic and a non-winged championship. It’s been one of those years you can look back on in years to come and see how amazing it was. I had an awesome car today. The crew worked really hard this weekend and we tried to cross our Ts and dot our I’s and we did that. I think the best the car was all weekend was in the race. It was a different track in the race, a little bit freer than we’re used to running on. I was able to get on the bottom of the track and race where they weren’t running. That’s what makes us better here.”

The goals Dave set at the beginning of the year, did he top them? “I think so. Like you said looking back today, it’s hard to put this year in words now as to what we were able to do. This is really about having fun and we really raced with two awesome teams – the John Nicotra race team and Jim Bodnar’s team. It’s pretty awesome to compete in cars like those.

“I have to thank Royal Purple Synthetic Oils, Bodnar Motorsports Chassis, Elios Financial Group, Level Performance Racing Engines. I couldn’t do without them. This Level Racing Engine today was spectacular. It’s just been an awesome year… one you think you could ever top really. To finish it off with two winged wins and winning the Oswego Classic and a non-winged championship. It’s been one of those years you can look back on in years to come and see how amazing it was. I had an awesome car today. The crew worked really hard this weekend and we tried to cross our Ts and dot our I’s and we did that. I think the best the car was all weekend was in the race. It was a different track in the race, a little bit freer than we’re used to running on. I was able to get on the bottom of the track and race where they weren’t running. That’s what makes us better here.

Chris Perley, a winner of ten past World Series ISMA events, had to settle for second this day. “We’re finishing off the year with a second. We’re glad the year is over. A second is good at Thompson but there’s nothing worse than leading at Thompson and finishing second. I don’t know. We worked on the car all weekend. We were happy with it. Then for the first time this weekend I was loose. I have no idea why. Earlier today in the practice we weren’t and it was the same tires. We’re doing this tire war thing. The crew works hard and it’s nice to have a second. I’d much rather have a win but I have great motors and good guys behind me. And, you can’t finish tenth without good guys. So, a second is good. It’s on to next year.”

The man who finished third was Jon McKennedy who not only finished his year with another podium finish, but also with something he’d lost out on before and something he really wanted to take home this time – an ISMA championship. Jon described his day and how it ended, “The car was loose from the green but I just let it go. I was in a tight points battle with Timmy and I couldn’t let him get too far ahead. I just drove as hard as I could. It was a handful. We were extremely loose the whole race. But, hey it all worked out. Everything stayed together and here we are!”

“I have to thank all the crew who work really hard on this car and the owners, Lee and Pam Vinal. A lot of hours went into this car the last few weeks. We covered everything we could to get ready for today. We knew if we just kept our nose clean and had a little bit of luck, we’d be all right. We did everything we could as far as preventative maintenance and it all stayed together. My goal this year was to win races and the championship. We felt we could do it. We won a race, had a bunch of to fives and that led to the point championship. It’s a huge turnaround for the Vinals after how they ran the last couple years. To get them their first championship and their first win in the same year is great. I am happy I could drive for them. They have been great owners to drive for! It was a tough battle with Timmy and I think it brought the best out of both of us for sure. I have to thank the sponsors, Vinal Excavating and Harrington Paving for all they’ve done. A big shout out goes to Dowker Engines and New England Motor Supply, Brian Allegresso and Butch Valley. They put a lot of work into this car and a lot of good ideas.”

Trent Stephens and Dan Bowes led the field to green and Bowes took the early lead, but Chris Perley was hounding him by lap 2.

On lap 6 Jason Spaulding’s 23 brought out the yellow and while he was being straightened around, Bob Magner, Rich Reid and Dave McKnight pitted. All would return to the action.

Bowes was able to hold off Perley on the restart with Timmy Jedrzejek, fighting to stay ahead of Jon McKennedy, doing just that for the time being, but Shullick was already on the move from a 12th place starting spot and got by Timmy J for third by lap 9. This set up a Jedrzejek-McKennedy dual in fourth and fifth.

The top three of Bowes, Perley and Shullick pulled slightly away from the 97-21 often side-by side battle which saw McKennedy get by Jedrzejek on on lap 13. One lap later Perley got by Bowes for the lead and one lap later, Shullick was breathing down Perley’s neck.

Shullick slid under Perley on lap 16 and took off for parts unknown as he laid waste to the field, eventually lapping all but the fourth place finisher Trent Stephens.

Shullick put lap cars between his 95 and Perley’s 11, also leaving markers between McKennedy and Jedrzejek who with 20 to go, began to loose ground to the 21 as Stephens took over the fourth spot.

Attrition was starting to show as Rob Summers, Dave McKnight, Mark Sammut and Mike McVetta left the racing surface by lap 41, while Shullick showed no sign of letting up coming up on Jedrzejek on lap 42 and putting him a lap down shortly thereafter. Dave Danzer was the last to exit with five to go.

Shullick easily took the double checkers moments later with Perley, McKennedy and Trent Stephens the only cars left not to have been put down a lap.

Stephens, who had a bad crash at the Star Classic and had been treated for a leg injury in the process, was more than happy with a fourth place.

“I have to really thank the crew for getting us here. After out Star wreck we had to replace a front and rear clip, and broke the motor engine block so we had to put a new motor in. It was bad but luckily not as bad as I thought it was. My knee is still bothering me but it’s not too bad. These guys worked from Star until Wednesday everyday to get it ready for this race. I can’t thank them enough. We had a good showing for it today. It sucks that we started first and finished fourth but I think we fell back to 8th or 9th at one point and came back up to fourth. The car was really good at the end. Everyone on my team was saying if I had a caution I might possibly been up to DJ. So that’s a win for us, especially after Star. It was a good day overall. The car is in one piece. So, we’re happy with that.”

Jedrzejek was understandably disappointed with a fifth place, but indicated, “It’s bittersweet. But we finished fifth. That’s not a bad day but not as good as we needed to win the championship. We were struggling out there. We got really free during the race, but we were actually free from the start when they gave us those warmup laps. I knew we were in trouble. But you just try and pace it and save the tires as much as you can without loosing a whole bunch of positions, but it didn’t work out so well. We’ll take a second in points and a fifth today. The car is in one piece. You know we’ve had a really good year. I have to be proud of that. We’ll roll the car back to Massachusetts now and get ready for next season. See everybody at the banquet.”