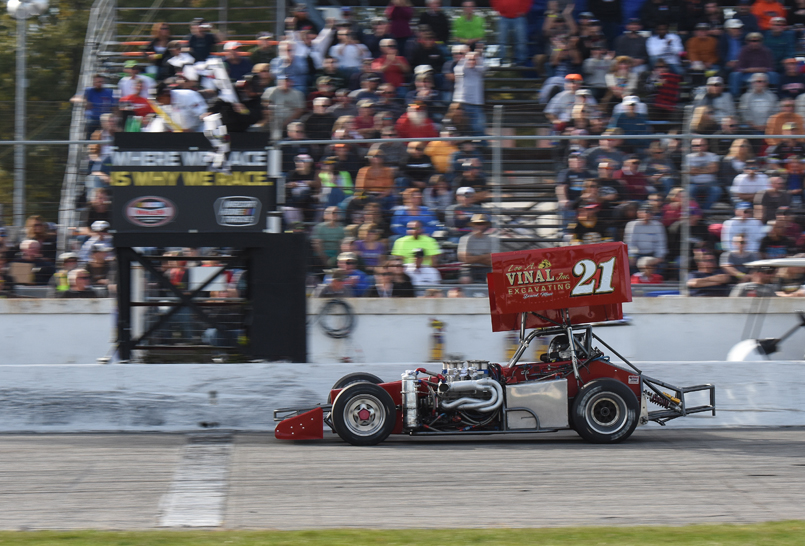 Thompson, CT – A strong field of winged supermodifieds filled the pits for the annual Sunoco World Series of Racing with the ISMA championship title on the line, as usually is the case. When all was said and done, the point leader Mike Lichty had beat out the challengers to claim his second career ISMA title. But the 50 lap feature race belonged to Jon McKennedy as he led from the start, and was able to fend off some top competitors for the win. It was an emotional run for McKennedy who had recently lost his dad Dennis. It was Jon’s 11th ISMA career feature win and probably his most memorable.

Jon indicated after the race that he felt he had some help in his win. “First I want to give a shout out to Lee and Pam Vinal, the car owners. We’ve been great the last two years. We won a handful of races, and a championship. This was a great way to end the season. It was a great win as I lost my dad a week or two ago. I have a lot of emotions for sure. But Dad was riding with me today and I was glad to get this win. It feels great. The car ran awesome. A big thanks to the crew, everyone – a big shout out to Bob Harrington Paving, and everyone who makes this possible. Going into the race I felt pretty confident. And we had a good starting spot. I knew we had to jump to the lead fast because I was surrounded by a lot of good cars. It’s not too often that you have of the best cars all starting in the top five as it happened today. So I had to go and just stand on it the whole time, not letting anyone behind me. The cars are so aero dependent and clean air is obviously a big help. So I go to lead every lap. One more thing. I want to thank Doc (Hathaway) as president the last two years for running the whole deal. I look forward to seeing him in the future.”

A second place finish behind McKennedy for Mike Ordway Jr. pushed him second in ISMA final points over 2018 champ Kyle Edwards in the chase for the championship by just one marker (1586 to 1585).

Said the Maine resident, “It wasn’t a bad race. Just lacking a little to catch Jon there. You know he’s really good here at this race track in anything he runs. Hats off to those guys for a great run. I just have to thank Clyde and Susan Booth, and JRI Shocks, Marollo Racing Engines for all their support this year. Hopefully they will come back on board for next year and we’ll come back and see what we can do. We finished in one piece and didn’t tear anything up this year. The engine has run great. It’s just been, all in all, a good year. We came out with a second place finish in points with a second place finish here at Thompson. So we’ll come back next year and try again.”

Ben Seitz, looking to repeat as World Series ISMA winner in 2018, settled for a third spot. “It was a good race. There were a lot of good cars to contend with up front and then lap cars. The last caution when Perley broke bunched the field, giving me a chance at Ordway, but it was Jon’s race. Thanks to Danny Soule and the entire team who works hard to get this car ready. Thanks to all who help out and congratulations to Jon for his win and Mike Lichty for his championship.”

The ISMA World Series event, started with some top drivers up front by luck of the top 12 pill draw, putting Mike Ordway Jr and Jon McKennedy on the front row and Chris Perley and Mike Lichty right behind. So, as Jon indicated, it was go time at the drop of the green. Unfortunately, Tyler Thompson’s 98 blew a motor in turn 2, sending him around, gracing the wall, shredding a tire and leaving some cleanup to be done.

On the complete restart, Ordway and McKennedy stayed side by side with McKennedy just inching out front of the 61 for the lead as they crossed the line. After four laps, a quick yellow fell for the 14 of Joey Payne who had a spin.

Back underway McKennedy pulled slightly away from Ordway, Chris Perley, Seitz, Lichty, Edwards and Jedrzejek, as the race sorted out. 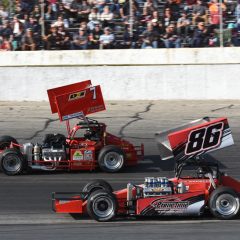 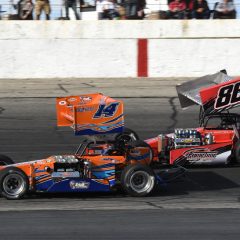 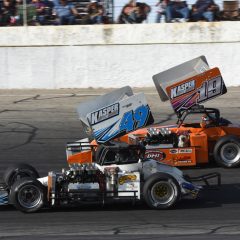 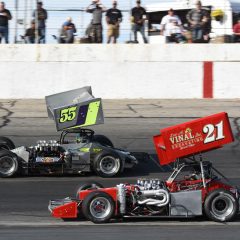 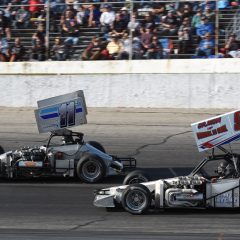 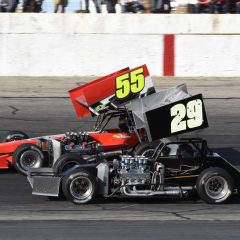 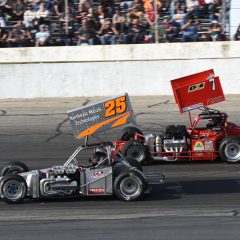 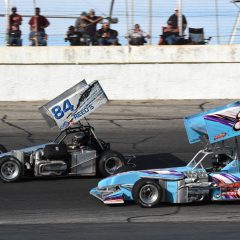 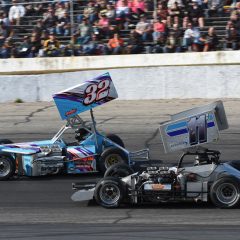 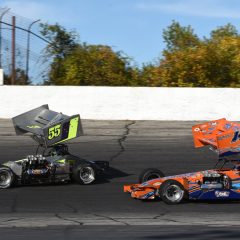 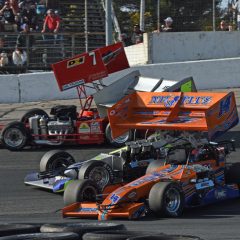 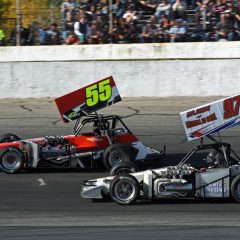 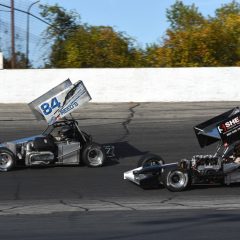 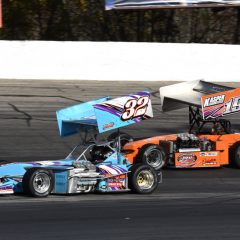 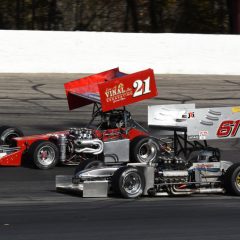 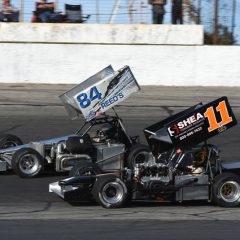 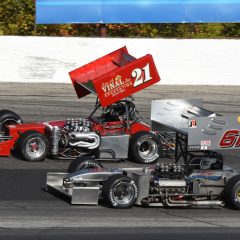 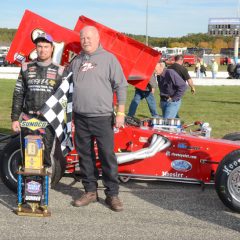 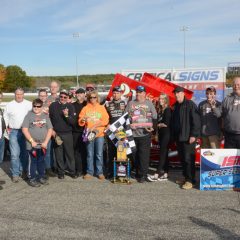 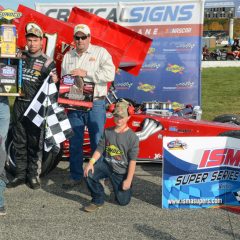 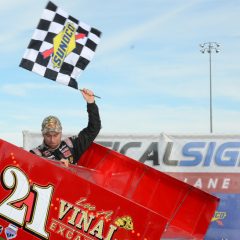 By lap 9 Jon was already lapping the tail of the field as he definitely was a man on a mission. Ordway, Perley, Seitz, Edwards, Lichty, Jedrzejek, Michael Barnes, Trent Stephens and Dave Shullick Jr. were among the challengers.

Lap 13 saw another quick yellow bringing the field back together, but McKennedy stood on the pedal to leave Ordway and Perley behind. A few laps later Perley moved into second but McKennedy had some real estate between him and the 10-time World Series ISMA winner.

At the halfway mark McKennedy had a lap car in between him and the Rowley Rocket, as Ordway, Seitz, Edwards, Jedrzejek and the Lichty led line behind, with a few lap cars in between.

At the lap 30 mark, Perley appeared to be reeling in the 21, and a lap 32 yellow for a spin by the Lesiecki 7, looked to be giving Perley a strong chance at catching the 21, but that chance evaporated when on the green Perley began to slow and eventually was pushed into the pits with a broken torque arm which took out his drive shaft. He was obviously done.

It was Ordway now pressuring the 21 on the restart with Seitz, Edwards, Jedrzejek, Lichty, Barnes, Shullick, Mark Sammut and Dan Bowes still racing hard. But, again McKennedy pulled the 21 away, leaving Ordway and Seitz fighting each other for second.

With eight to go, Jon once again was in command out front of the Ordway, Seitz, Jedrzejek, Edwards, Lichty, Barnes, Shullick, Bowes and Sammut group. Lichty just needed to finish where he was to win the championship and he knew that.

By the time the checkered fell for McKennedy, he was pretty much alone out front. Ordway and Seitz, who also had a strong run in a Bertrand midget the previous night, topped the podium.

Sitting in fourth was Timmy J who was okay with that spot. “Fourth place is a good day for us for sure. We had a solid car all weekend and we were comfortable from the start to the end. We had to kind of change my line and start out at the bottom starting ninth. We obviously had some work ahead of us. There were quite a few fast cars contending for that win up in the front of the lineup, so we had to give chase. But we made it up to fourth and that’s probably where we were going to be. We were a fourth place car. It’s solid and in one piece. I have to thank Doctor Mom Says School is Cool, Essex Seafood, Enerco and all the people who help out on this car. And to the team for all the hours spent preparing two cars for these last few races, thanks for their support to ISMA and the Lane team.”

It was Edwards in fifth who probably had the most to lose and he indicated later, “We gave it everything we had. We had a good car. It just got tight at the end. I just have to thank my sponsors and my dad and everybody who helps us. It was a pretty successful season. I wish we would have won. I think we ran in the top five every single race. So we had some good consistency. We just need to win and we can get that championship back again. We’ll just head to 2020 and just move on. “

Sitting in sixth was Lichty who said later after gaining the 2019 ISMA crown, indicted that he was pleased with the results.

“Mission accomplished. It was a good year all in all, definitely. I am a little disappointed on how we ran today being that we were extremely quick in practice and the heat race. We were way too loose right from the green flag. But we did what we had to do. Congrats to Kyle as they had a really good year. And congrats to Clyde, Sue and Mikey for their second place. As I said it would have been nice to contend for the race win but we did what we had to come home with the championship. We’ll take it. I have to give a big thanks to Craig Reed and Reed Salvage and everyone in the Reed family. Also to my father and Patco Transportation and everybody on the crew. And thanks to Level Performance and everybody at the shop.

“One win this year at Oswego and a lot of top threes. This was key – in order to win the championship you have to finish every lap and so we did that. This championship is primarily for all the guys who put in the hard work to it. I always say go win races and the points will take care of themselves. I usually don’t points race. But this is for all of them. It’s a good deal. We’ll get things organized over the winter and go at it again next year.

“We’ve won a championship and been close a few times after that. But a second one is special as they are close to come by. Winning races nowadays is hard to come by too. We’ll just take them when we can get them. I’m excited for next year. Not sure what the schedule will look like but I’m hoping to get the season started a little earlier but I found it was actually not as hectic as it’s been in recent years. We’ll just look forward to next year and we if we can do it all again.”

Lichty and the 84 team will be honored at the 48th annual ISMA Banquet on Nov 2nd.