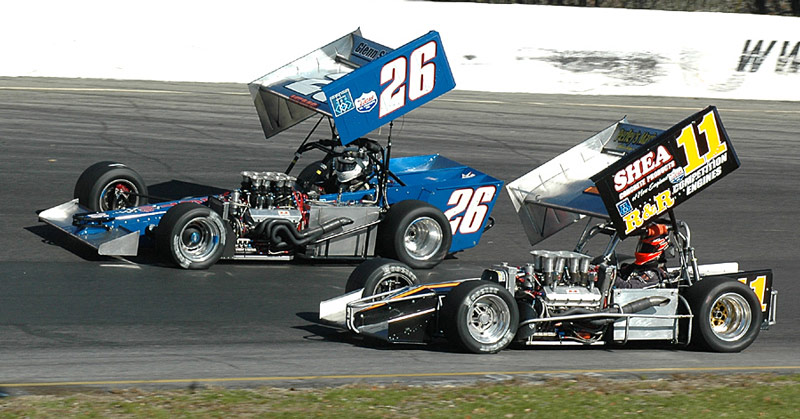 Thompson, CT – Chris Perley has been tearing up the ISMA fields since he lapped the field at Star in early September. He continued that streak into Thompson’s World Series Sunday by winning his third straight World Series ISMA 50, pretty much dominating once again. But, ISMA point leader by 11 markers, Pat Abold, also did what he had to do. He stayed right behind Perley as he has many times this season, and claimed the third ISMA championship of his racing career. Perley’s victory was his fifth of the season and insured him the runner-up spot in the Lucas Oil-Helping Hands of American championship chase.

Said Perley after lapping his eighth place running teammate Bentley Warren on the way to victory, “I guess we won the battle but Pat won the war. It was fun racing down to the wire like that. It’s always good to win at Thompson. If we couldn’t win the championship at least we won the race. The car’s always awesome here. It was great here for the last couple years but then it’s been great everywhere this year. We were able to let loose out there and we lapped a lot of cars…kind of of wished one had been Pat, but he was just running too good. Actually I had used up the tires. I was starting to get slick out there at the end. But it was a good day. I’d like to thank all the fans for waiting out the weather here and I’d like to thank all my sponsors Ed Shea Concrete Products, R&R Engines, Perley’s Marina, New England Motor Racing Supply, Barrett Transportation, Hardy Transportation, Jack Cook Enterprises and Vic Miller and the crew.”

Finishing second with several lap cars between his Dunigan 26 and the high-flying Rowley Rocket, Pat Abold clinched the 2005 ISMA title for the team. Pat, who won back-to-back titles in 1992 and 1993, commented, “Obviously we feel great today. It feels good to win another championship. It’s been 13 years. We were close last year. We had a little more consistent year this year. I kind of wanted to win the race and put an exclamation point on it, but Chris is just so fast right now. Those guys are so good. I’m psyched. I knew we had a good car today and we did what we needed to do. This championship means a lot. The competition level is as tough as it’s ever been. And, with all that’s happened with the Dunigan team, it’s good to bring the title back home again. It just means a lot.”

Team owner Paulie Dunigan was also smiling after Pat’s win. He had lost his father Paul just prior to the start of the 2004 season and it was a tough road for the whole crew without their dynamic leader. Paul, an ISMA champion car owner for the first time said, “We had a great season. I want to thank all the guys. Everybody worked real hard. I had a great driver who waged a great battle with Chris. Hats off to those guys. I don’t know what else to say except that this one goes to my dad.”

Rounding out the top three in the 50-lapper was Pat’s teammate Russ Wood. “Third place is better than I thought we’d be,” said Russ. “The car was not too good on Saturday. We made a bunch of changes. The car was coming around at the end, but those guys were long gone. I’ll take the third. The team won the championship. We had a pretty decent year overall.”

A quick yellow on the green flag lap of the race saw Justin Belfiore brush the wall ending his day early as he joined Johnny Payne, whose car had not fired, in the pits. On the restart, Mike Lichty grabbed the lead but fellow Canadian Mark Sammut took it away on the third circuit. Moving quickly up through the field from 11th spot was defending race champ Chris Perley and by lap seven he was second with Pat Abold up behind Randy Ritskes who was fourth behind Lichty.

Chris kept his forward momentum going as he passed Sammut out of turn three on the next circuit to take the lead. He was gone from thereon in. By lap 14 Steve Knowlton, driving the former Cicconi 75 now owned by Brett Roundy, was Perley’s first lap victim. Pat Abold stayed within sight as he moved into second several laps later.

Lap 20 saw Joey Payne, in the Boisvert 66, fly the yellow with a broken wing and the slowdown closed up the gap between first and second, but not for long.

Perley turned up the wick a notch and moved way out front once again after the restarat leaving Abold, Lichty, Russ Wood and Sammut the top five. Randy Ritskes, Jon McKennedy, Dave McKnight, Nokie Fornoro, who had a NEMA World Series win already under his belt this day, and Scott Martel, fought for top ten spots.

Perley stormed around the Thompson oval eroding the pack, as the race remained green. With five to go he was moving in on the seventh place car of McKennedy while Abold just watched contentedly knowing he too would win when the checkered dropped. On the last lap, Randy Ritskes stole fifth from Mike Lichty to follow Perley, Abold, Wood and Sammut over the line.

Sammut ended what seemed a luckless second half of the season with a sigh of relief. “I thought we were going pretty good at the first there, but we weren’t even close to Chris and Pat. They were in their own league there. It was a great run for us really. The car was a little bit loose at the beginning and then it was a little tight. But considering what we’ve had happen the last part of the season, we’ll take a fourth and build on it for next year.”

Fifth was an accomplishment for Ritskes who also has struggled in the Budnick 88 all season. “It’s nice to get a top five. First race of the year with a top five and it’s the last race of the year. I’d rather do all the ones in the middle though. We knew we were a little slow when we got here. Bruce and I discussed it this morning and made some changes on the car and it seemed to work out good for us. It’s a nice way to finish the year.”

ISMA honors its champions and achievers at the annual awards banquet at Turning Stone Casino on November 5.