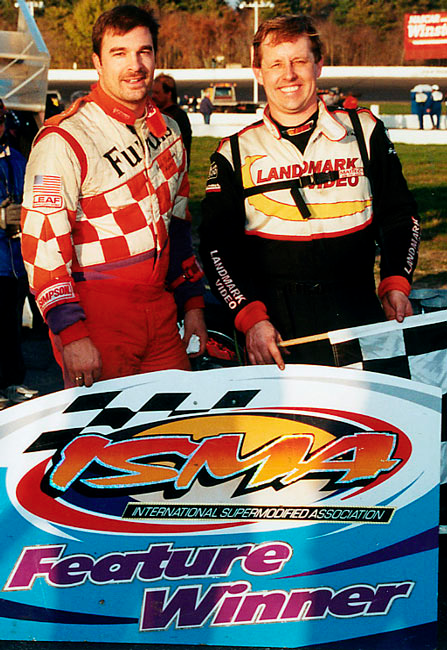 Thompson, CT – Russ Wood, Chris Perley, Lou Cicconi and Dave McKnight went into the Thompson(CT) World Series of Racing ISMA 50 this past weekend with hopes of coming out the champion. Only one survived and that was Wood.

Not only was he the last of the aforementioned on the track when the checkered dropped, he was the first under it also.

By virtue of his fourth win of the the season, Wood also clinched the 2002 ISMA championship for car owner Paul Dunigan, his seventh such honor with three different drivers.

With rain drenching the activities on Saturday, the ISMA contingent lined up by handicapping the top 12 and filling the rest of the 30-car field by points.

Wood took the lead from 2001 champ McKnight after a lap 27 restart and was not really challenged after that. His only possible scare came when several puffs of smoke issued intermittently from the 29 during the feature, but they were no deterrent to the Pelham, NH driver.

Russ commented after the feature, “Something out of the exhaust was leaking, causing the car to smoke. It was a minor engine problem. The car ran fine. Just had a little smoke. I’m glad it didn’t get any worse. I thought Perley and Cicconi had just slid up high and I went under them. Later I saw them in the pits and I was disappointed. I kind of wanted them out there. I wanted to race with them. But, what are you going to do. Our car was good so I was up for the challenge.”

it set the standard for others? “A sixth championship? “It feels good to get the sixth. Maybe I’ll shoot for seven. This car sets the standard, not me. The race car and the team are the standard. I’m just here for the ride.”

Pat Abold, driving the Dunigan 26 and Howie Lane, sat on the front row after the handicapping was completed while the four main title contenders were scattered between 7th and 11th on the starting grid.

A first lap yellow saw the 76 of Rod Sauder headed pitside with a flat. Jen Chesbro made a quick stop here also.

Howie Lane and Pat Abold did a drag race for the lead with Lane winning the contest. A four-way battle soon developed between Lane, Abold, Scott Martel and Dave McKnight while several top runners in Bentley Warren and Randy Ritskes dropped by the wayside with mechanical woes.

Lap 4 saw the yellow fly for the 85 of Mark Buonomo who parked the Witkum-owned machine on this lap.

On the green a quick moving Lou Cicconi was headed for the front. He was second when the yellow flew for the 98 of Bobby Santos who had stopped out back.

Cicconi took over the point when the green flew again with Dave McKnight tacked to his bumper. The duel for the points had begun as Chris Perley moved into the mix on lap 11. Russ Wood sat seventh at this point with a 23 point lead over Perley.

Things fell apart for Cicconi almost as fast as they had built up. On lap 14, Cicconi was around in turn 2 and his 75 required a tow truck, ending Lou’s bid for a title. Lou said later, “The hub on the left rear wheel broke. So, that was the end of that. battle. What are you going to do?”

Pat Abold who had been running just out of the top five parked the Dunigan 26 on this caution and reported out for the night.

Dave McKnight was now the leader and Chris Perley put the pressure on as he needed the win to make up any points on Wood who had now moved into fourth behind Greg Furlong. Chris tried the outside of McKnight for several laps off turn four, but settled back into second both times.

Disappointment struck for Perley on lap 19 when the 11 suddenly slowed and was in the pits on lap 21. Chris, also, had his hopes of a first-time ISMA championship end as suddenly as Cicconi’s. “We broke a bolt on the locating bar,” Chris said at race end. “I think the car was there. We would have been all set. I was doing the patience thing. I saw Lou go out, then I went out. Then McKnight went out. The last one out there was Woody and he still would have won, so it doesn’t matter anyway.”

Leader McKnight, still looking for win number one of 2002 after taking six in 2001, now had Russ Wood bearing down on him while Greg Furlong was right there in third, Ken Bell, Scott Martel, Mike Ordway and Brad Lichty were running strong behind.

A quick second yellow for the Santos-driven, Lair-owned 98 came on lap 27 and it was on this restart that Wood took the lead and the eventual win. Russ gradually pulled away from McKnight, Furlong and Bell and soon was melding into traffic, leaving the others behind.

The final title longshot was Dave McKnight who was now running second to Wood and would have to pass him to have any chance. Dave, also, met with mechanical problems, sending him backwards on lap 44 and out of the race on lap 45.

A yellow for John Payne’s 67 was the last slowdown and it gave Greg Furlong a brief chance at Wood, but Wood didn’t stand still long.

Russ Wood crossed under the checkered with a comfortable margin over Furlong and Ken Bell. Scott Martel and Mike Ordway battled to the line for fourth which Martel took. Brad Lichty, Eric Lewis, Jon Gambuti, Mark Sammut and Howie Lane rounded out the top ten.

Unofficially, Chris Perley finished in second in the final points with Dave McKnight moving past Lou Cicconi for third by three points. Scott Martel may also have moved into fifth passing the Lane 9 team by two points in the final season race. The final official points will be released later this week.

Heats: Qualifying cancelled due to rain.