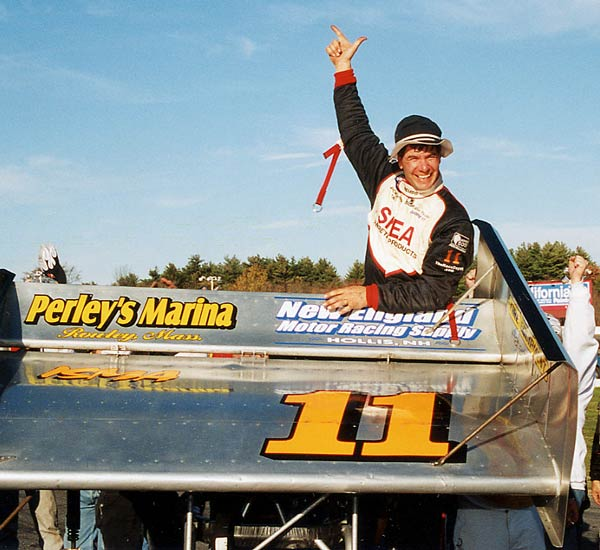 Thompson, CT – Chris Perley and the Vic Miller crew had to survive one extra week of jitters before running the final ISMA-Lucas Oil event at Thompson Speedway, but it was well worth it. Perley needed to stay ahead of defending ISMA champion Russ Wood to win his first-ever title. This he did neatly by winning the 50 lap ISMA finale to claim his fourth feature victory of the season and the team’s first owner-driver championship. Perley, who was runner-up to Wood in 2002 and 1996, powered by race leader Dave McKnight on lap 15 off turn two and built up a healthy lead by race end. His crew, from the infield, indicated he had a big lead. But, he wasn’t slowing down he said later. He didn’t have to.

“We didn’t really know what to expect today,” said the popular pilot from Rowley, Mass. “A few of us had burned up tires in the heats and I was one of them. But, we tightened up the car today and after getting in front, I could see my crew out there giving me the big wide sign, but I just couldn’t slow it down. It was going too good. Everybody worked so hard for this championship , so it’s good to bring it all home. It’s great to win our first championship and it’s always good to win at Thompson too.”

Accolades for this achievement went to car owner, crew and sponsors. “We have a great bunch here. Thanks to Vic (Miller), all he does is pay the bills. He’s probably the cheapest car owner in New England, we don’t really overspend, but he puts the right parts on the car. Thanks too to Scotty, who is my main man (not the crew chief), Leo, Mikey, Jim (Curtis), big Phil, little Phil, Andy, and Ricky Wentworth helps us a lot. Everyone works real hard during the week. They put a lot of hours in and this past year has been good for us. We build our own cars in Vic’s shop and this year the car has been so consistent. Our sponsors have helped greatly- thank you Ed Shea New England Concrete, R&R Engines, Perley’s Marina, NE Motor Racing Supply, Barrett Transportation, Hardy Transportation and Jack Cook Enterprises.”

“This is just awesome. I don’t want to make light of this, but we haven’t run a ton of years with ISMA on the whole tour. But, there is still a lot of work involved. Nobody gives up easy. I was so nervous going into the race, then having the rain date. Now I can probably sleep or possibly pass out. I’ll figure out later what all needs to be said here.”

Veteran car owner Vic Miller, with almost 40 years of racing under his belt, reiterated, “This is really good. I feel really good for Chris and all the guys who work on the car. But, you know the guy who really put us over the edge is Eddie Shea. He does so much for us. And, of course R&R Engines. He’s been with me for over 20 years. We won this year and we’re really excited. Chris is a good driver. He doesn’t wreck the car that much. It really has worked out good for us. It was a lot of fun racing this year.

Twenty-eight supers took the green on Saturday, October 25 to finish up the Thompson World Series that had been started one week earlier. Caution hit before one circuit was complete when Mark Sammut was into the inner wall off turn two and on the hook.

Perley, whose 11 was working to perfection, drove by McKnight on lap 15 and began to pull immediately away.

Yellow dropped on lap 17 when Howard Page’s 18, repaired after a bad crash on the 19th, came apart. John Payne and Ricky Wentworth dove into the pits at the same time.

Perley pulled away from McKnight on the green with the race never slowed after this yellow. Joey Payne, Petro, Ritskes, Wood, Pat Abold, Scott Martel, Fornoro and Greg Furlong were top ten as Perley began to dive into the tail of the field.

“The Rowley Rocket” stepped somewhat gingerly through the slower cars, although it didn’t look that way from the bleachers. “We took our time anytime we came into traffic. I got bit at Oswego with the whole traffic thing. I really, really took my time. I knew that I could wait. That was probably a big part of it. I didn’t stick myself in a bad spot.”

Some attrition along the way claimed Justin Belfiore, Mike Ordway, Wentworth, Jamie Letcher, Brad Lichty, and Kyle Carpenter who was filling in for Joe Gosek in the Lair 98, while Gosek accepted his 2003 Oswego Speedway title at that banquet.

With fifteen laps remaining, Perley had a sizeable lead over McKnight and Payne who were battling tooth and nail for second. Pat Abold and Scott Martel, whose wing began to break apart, seemingly making the 14 faster, fought for fourth. Martel would get by Abold by the five to go sign, leaving Pat ahead of Joe Petro, Ritskes, Wood, and Furlong. Perley was coming up right behind this pack in the interim.

At the checkered it was Perley crossing for a thunderous explosion of cheers from the large crowd on hand while Payne pulled ahead of McKnight for second in the last go around. Martel and Abold finished up the top five.

Payne was more than pleased with second in his relatively new ride. “For the first time with this car on a big track, this is good. I don’t know this car. I know it’s been around the world. It’s been hammered and fixed up, I’ll tell you it’s not hurting for horsepower. We had a good run today. The crew put too

much wing in the car today and it was killing me down the straightaway. It’s a great weekend for me . I got the championship in the NEMA midgets and a second place here. I couldn’t ask for anything more. I have to thank Pynn Masonry, and Kenny Chapman for hiring me.”

McKnight, who had an up and down season to say the least, said after his third place finish, “What can I say. The year’s over. I’m happy for Vic Miller and Chris Perley. I know how hard it is to win a championship with us doing it a couple years ago. My hats off to that whole team. They did a great job and they deserved it. As for the Lucas Motor Oil Patco team, I think they did a great job today also. We’re getting back on track and we’ve been up in front the last couple races. I’m looking forward to next year and hopefully we can bring home another championship like we did two years ago.”

Scott Martel, as he was celebrating his friend Perley’s win in the campground, commented, “We got caught at the beginning and had to race guys hard but we came out fourth with a broken wing. All in all I’m really happy. I’m happy for Chris and Vic and that whole group of guys. It was another good finish for our team in the end. Every race that I have run, we’ve been really competitive .I want to thank all my sponsors, my father and my crew because when we showed up to race, we were right up front. We’ll look at next year now. We have a lot of tentative plans for next year. I’m excited and ready to go out and run good next year.”

The Miller-Perley crew and others will be honored at the ISMA-Lucas Oil Super Series banquet on Saturday, Nov. 8 at Turning Stone Casino in Vernon, NY.