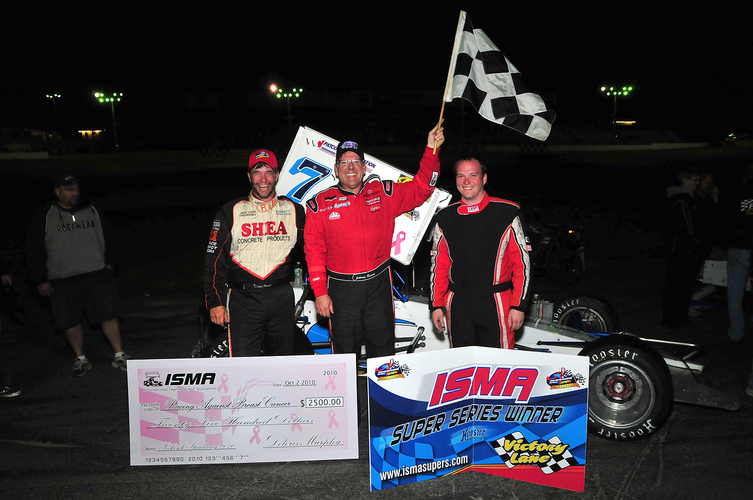 Seekonk, MA – Saturday night Johnny Benson Jr. took over the lead of 100-lap Racing Against Breast Cancer ISMA event on lap 28 from an ultra-quick Robbie Summers and continued on to his quest for victory over a stellar field, which included former Seekonk winner and key challenger Chris Perley. There were faster cars at the Cement Palace this night, but none better and none that made the winner more proud.

Benson contemplated what the whole night meant. “My dad raced supers when I was a kid – around 5, 6, 8 years old. He then ran them again when I was around 13 or so. Dad then ran late models for many, many years. That’s what I did too. But, winning a supermodified race was always one of my goals. When Brad Lichty gave me an opportunity four years ago to take a couple laps in a super, I took it.  Afterward I talked to my dad and he said, ‘They’re pretty good aren’t they,’ and I said ‘yes they are”. I went on to run for Brad, got my own car and wrecked it so bad, then came back to race for Brad and finally won!”

“I can’t say thank you enough to the Lichty family and everybody who works in this organization. They are such a great family to me. It means more to me winning this race with Brad and this group. It definitely means a lot. Don’t get me wrong. I’d have liked to win one in my own car, but for Brad to give me the opportunity means a lot for me. It’s very cool.”

After Benson took the lead his main challenger became the always-amazing Rowley Rocket. Benson knew he was there.  “Anytime the 11 is at the race track it’s a problem. Chris is so good. I grew up on round race tracks so hopefully that helped us tonight. Chris Perley and that whole group have been phenomenal and it was nice to say he was here when I won!”

Perley, after one or two late race attempts at the 74, gave the credit to Benson. “He was just too good. If this thing (74) was a pick up he would have really hauled butt! We had a good car. We didn’t start off the race tight enough tonight. As always the crew gave me something to work with. I was ecstatic with second watching Johnny. He could reel them in on a long run – a long run being six or seven laps, but the lap cars starting in between made it harder to catch up.”

Perley continued, “With the lap cars out there we were having a blast.  We were just sucking them for a long time but if I had made any sort of a goofy move I would have spun myself out. The car got a little too loose half way and I didn’t know if we could hold on to second. I saw the 50 coming up on the board and I didn’t know if anybody gave me a fight if I would have been in trouble or not. I gave it all I had trying to get Johnny but it was too little, too late. I love coming back to Seekonk. Great crowd, great car, great motors and just one more great time.”

If a truck driver winning a winged supermodified ISMA race wasn’t enough of a surprise, a rookie driver with little winged and little knowledge of the tough Seekonk bullring finishing third, added to the excitement. Fulton, NY’s David Gruel, a first-year pilot in the supers had just seen Seekonk a couple months ago, but he took to the track with the poise of a veteran when he pulled onto the Cement Palace in the Hoefer-Samuels 50 that has called Oswego home most of the season. How did he pull it off he was asked in victory lane?

“I have no idea. All I can say is that the Double Deuce team gave me an awesome, awesome car. The car basically drove itself. I was getting off the corner better than just about anybody else out there. I know Johnny and Chris were out there a bit, and I didn’t quite get to race with them but I know that after starting 12th and having to go through that traffic, that the car was just awesome all the way..

A 25-car field of winged supers took to the 1/3 mile banked oval with Robbie Summers, who had spent part of the day qualifying a modified at Stafford, taking the early lead, trailed by Jeff Locke, then Russ Wood. Wood came into the 100-lapper just 3 points behind Canadian Mike Lichty in their battle for the ISMA title. He won his heat and looked to be headed for a win or top spot and the points that went with it.

A couple minor skirmishes slowed Summers, who was turning some torrid mid 10-second laps, but he was able to maintain a lead over Wood. Back in the pack ninth place starter Johnny Benson was picking his way quickly toward the front as traffic came hard and heavy for the leaders. Benson got by Wood on lap 24 as Wood slowed suddenly and exited the track with an obvious malfunction. He would return later to finish 19th,  22 laps down salvaging some of those sought after points.

Out front Benson faced a long green stretch and a ton of traffic, which allowed Summers to stay nearby. Also moving up were Perley, and Mike Lichty, passing by Jeff Locke. Unfortunately, Summers was also moving, but it was backwards. The Vernon, CT driver said of his hectic day, “We started off real fast in those few practice laps we got earlier and the car was good in the heat. We just missed it a little bit in the feature. We got tight and we kind of fell back but then people crashed or loosened up and we ended up fifth. It was a decent day for us.”

Another driver moving quietly up through the field was David Gruel. Just prior to a lap 47 caution for a spinning 88, Gruel had worked his way up to fourth behind Benson, Perley and Lichty, although lap traffic was also playing a role.

Said the former small block super runner at Oswego, “ I was always in traffic. I always had somebody in front of me. The car worked low or high – wherever I had to put it. Then five, ten laps to go, it started loosening up a little bit. But I still had an awesome race car.”

On the restart Perley quickly put a lap car down and headed for leader Benson as the two pulled away. Another slowdown came on lap 54 just as Benson was about to encounter more traffic. Dave Duggan spun the 51 and got clipped by Bobby Santos in the 61. Santos, who held a slim margin in the Whelen Modified Tour points going into Stafford’s Fall Final, had also been at qualifying there earlier in the day. With no more practice than Summers had, Santos was moving up in the ISMA field until tagging the 51. His day was done at 54 laps as was Duggan’s.

Back underway it was Benson, Perley, Lichty, Gruel and a slew of lap cars back to Ben Seitz, Justin Belfiore and Bob Magner. A classic cat and mouse battle ensued out front with Lichty laying back from the dynamic duo out front.

With 20 to go, the crowd was on the edge of their seats watching Benson and Perley thread their way past traffic that was running almost as well as the leaders. Lichty, Gruel and Seitz were doing likewise a distance behind in the top five. Gruel was able to take third in these waning laps as Lichty’s car was not cooperating.  Said Lichty after ending up seventh in his quest for a first-time ISMA title, “The camshaft was sucking the oil filter in and I’d lose the oil pressure which made the switch turn the motor off. I really don’t know. Once we picked up speed, we’d be okay, but the pressure was too low when we were at an idle. We were too tight also. The car became horrible.”

A caution on lap 94 gave everyone a quick breather, but it came at a price for fifth place runner Ben Seitz who had to exit with a broken top wing. His day was done, but Justin Belfiore moved up to take that coveted fifth place spot and soon thereafter fourth.

Just seven laps remained when the race resumed and it was Perley moving up on Benson in the corners, but Benson pulling away slightly in the short straights. With two to go, Perley gave it his all, but the 74 prevailed. Gruel, Belfiore and Summers eventually finished up the top five. In victory lane, Benson, on behalf of ISMA, presented race promoter Kraze Korlacki Speed Equipment’s Gary Sagar with a $2,500 check for the Racing Against Cancer effort. Portions of the admission price also went to the cause.

Fourth place finisher Justin Belfiore, was more than pleased with his fourth place after having a really up and down season. “I had no expectations going into this race. The car was horrible all day. I only had four or five warm-up laps and I was the slowest car. We talked about what we wanted to do and decided to make it totally different than what it was. It was actually probably better than what I ended up because we bent the canard wing with a lap car around midway. That made me go back to being tight. I was actually following David Gruel and he was doing a heck of a job. Once I caught up to the back of him I didn’t even feel like going in front of him at the time. I was going to wait it out because he’s doing such a good job. I’d like to say congratulations to him. I don’t know if we could have won but I’ll certainly take a top four. This is great for us.”

Eric Lewis, Mike Lichty, and Mark Sammut, finished sixth through eighth, the final cars on the lead lap. Joey Scanlon and Jon Gambuti completed the top ten, both one down.