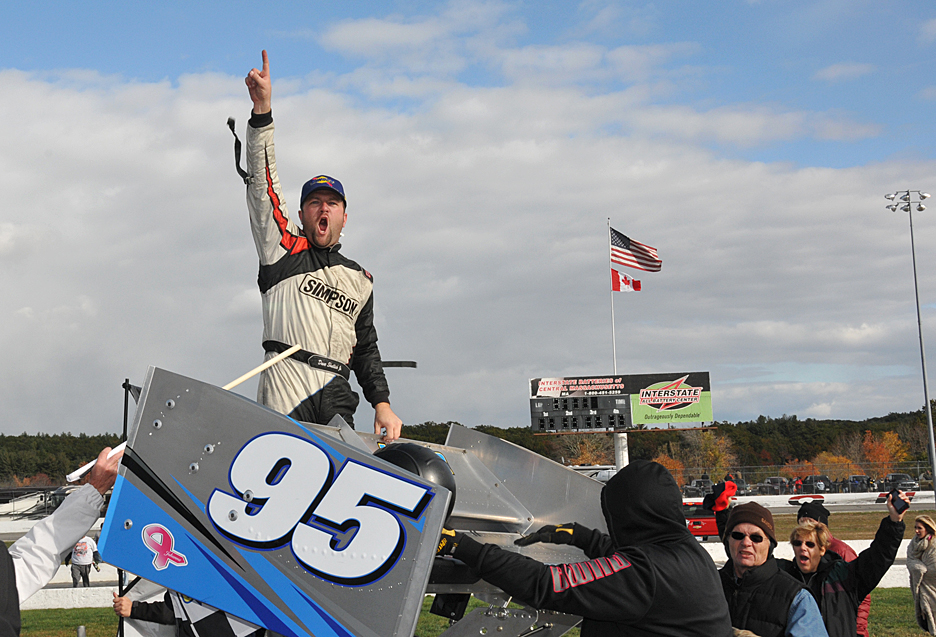 Thompson, CT – At the beginning of the 2015 ISMA season, Dave Shullick Jr. had a set goal, to try for an ISMA championship. He won Midwest Supermodified Association (MSA) titles and had many wins. When he had run sporadic ISMA events in the past, he’d won on that circuit too. This year the Bodnar-Shullick team chose to run a full schedule with their eye on the championship. On Sunday, at the Thompson Speedway Motorsports Park World Series of Racing, Shullick charged through the field of 25 to take the ISMA 50-lapper and more importantly, the 2015 Owner-Driver championship. In his first full season in ISMA “Shoe II” became the first Ohio driver to claim the title. Mission accomplished!

Shullick reflected on his successful season and what it all meant.

“I had hoped we could get a win here today. We had a really good car. I knew we’d be tough if we were there at the end. This really caps off a great season.

“We ran last year and missed some shows. We felt if we had run those shows we had missed we would have been there in points. This year we set out with a goal of doing it and seeing through the end. Really, the year went very well. I think we had the lead in the points all year for except after one show. It was a good year. I would say winning a championship is not about your good days, it’s about minimizing your bad days. We were able to do that at Oswego for example, when we hit the wall. We were able to put the car together and rebound back up to third. It’s an entire team effort; everybody pitches in. And, there’s Jim Bodnar, the way he works on the car from 6 am to 9 o’clock at night, every night. He’s completely dedicated to winning and you can tell, because we don’t break down a lot.

“The team has five wins and Otto had one. We were really happy to see him get that. The wins definitely helped. So we had six wins as a team. Who would have thought it? As I said, it’s an entire team effort including Level Performance, Elios Financial and everybody who pitched in throughout the year. In a sport where your father is one of the legends you look for a way that you can separate yourself a little bit from what he did in his legacy. I think this is something we can hang our hats on that we did and he didn’t.”

What were the plans for the future? “I assume we will defend this title next year. We’ll see when the schedule comes out and what it looks like. I look forward to the ISMA banquet and I will probably run some TQ stuff during the winter with Louie. We are looking forward to that.

After MSA and ISMA championships and the wins there, will you pursue the goal of winning a non-winged race at Oswego? “Absolutely. I will always have that goal of winning at Oswego to win a non-win feature there. I wouldn’t put it past a point in my racing career that I actually get to run up there weekly at some point, so we’ll see.”

Connecticut driver Rob Summers looked strong from the onset of the race, taking the initial lead and keeping the point until Shullick got by at the halfway mark. Summers was content with his second place after what might be called a luckless season. “I’ll take second after the way this year has gone. I would have liked to win, but second is okay. We had a good run. Congratulations to Dave and the team on the win and the championship.”

The guy who had been Shullick’s main challenger to the ISMA title, Mike Lichty, tried his best to claim a second ISMA title, but he fell short. He had won a heat on Saturday and was able to work his way up to third from his tenth starting feature spot. He said of his podium finish, “We were way too tight for where we needed to be. I just tightened the car up way too much for what we needed from the car we had yesterday to today. We were just way to snug and couldn’t make the passes where they needed to happen. We’ll take the third and go on to next year.”

Rob Summers, because of his recent bad luck, started on the pole alongside Ohioan Danny Shirey and after just one lap, Summers had command, trailed by Jeff Locke, Eddie Witkum Jr., Ben Seitz, Trent Stephens, in his first ever run at Thompson, and Shirey.

The race continued non-stop as Summers led Locke, then Seitz, and Stephens through the first 15 laps with Summers cutting into the back of the field before lap 10.

Mike Ordway Sr., who trailed Stephens was first out of the event when he parked the Booth 61 on lap 11. moving Shullick into fifth spot from his 12th starting spot.

On lap 15, yellow fell for a race-ending mishap between the 21 of Eddie Witkum and Timmy Jedrzejek in the Lane 97, who came together off turn four, with both cars receiving heavy damage. The 40 of Bob Magner was caught up in the incident but was able to pit and restart.

After both cars were towed off, the green fell for Summers, but yellow fell immediately for a spin by the 14 of Jon Gambuti who was able to restart.

That stop was the last of the race and Summers was off once again leading Locke, Seitz, Shullick, Stephens, Lichty, Chris Perley, Bobby Santos, Perley’s teammate in the 71 and Mark Sammut, all running strong.

But Shullick was on the move and was up to second by lap 20. A lap car slowed Summers a little on lap 22, but he maneuvered by as did Shullick. Two laps later, Shullick was alongside and by the 74 of Summers and he was on his way to achieving that goal that was set months earlier. He pulled away from Summers and picked away at lapping a lot of the field. But Mike Lichty, too, was making some moves and he was right behind Summers by lap 30, while a slight distance behind Stephens, Seitz, Perley, Locke, Santos, Sammut and Shullick’s teammate Otto Sitterly, were all racing hard to keep the leaders in sight.

With ten to go, Shullick was in another time zone as Summers and Lichty were still nose to tail, with Stephens and Seitz running behind them several car lengths apart. Perley, Santos, Sammut and Sitterly were still in the same lap but Shullick was moving in on his own team car, putting Sitterly down one just prior to the checkered. Shullick, Summers, Lichty, Stephens and Seitz were the top five under the double flags. Perley, Santos and Sammut, were sixth, seventh and eighth, respectively with Sammut the last car in the lead lap.