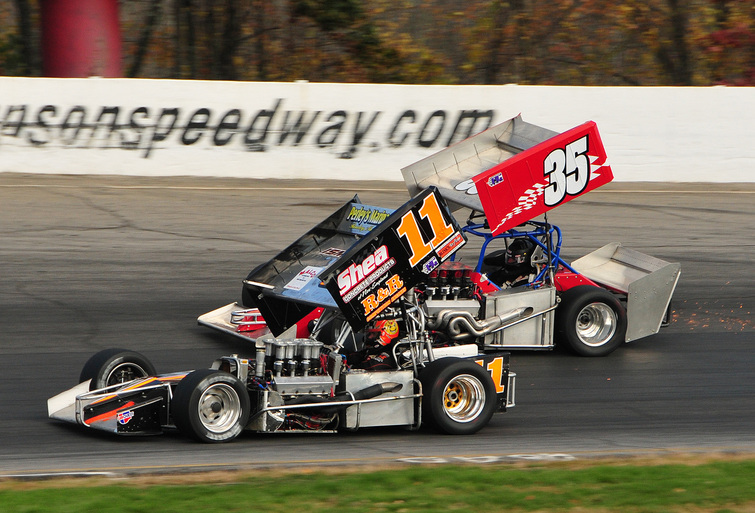 Thompson, CO – Chris Perley, who claimed his fifth feature win in a year that saw him run only eight events, had a pretty successful season in the Vic Miller 11. He was ecstatic, as always about his traditional season-ending Thompson victory, “I’ve had such a blast here. Every time we unload this thing it’s just a bullet. Thompson lets it breath and boy you just can’t slow it down. I’d like to run 300 laps here. It’s just so much fun out there. Everybody raced good today. Congratulations to Russ Wood for winning the championship.  We have an awesome car with an awesome motor. Ed Shea is always with us and we couldn’t do anything without him. Also thanks to Vic and the crew. I have great sponsors and a great bunch of guys with me. I wouldn’t want to race for anyone else. And, I have a great family that supports me. It’s all great. Thanks to all the fans out there that came to watch today.”

Finishing a very competitive second place was Wood’s Holbrook Racing teammate for this season, Robbie Summers. Summers started sixth in the field of 25 and had to fight with Wood, Jeff Locke and Ted Christopher to get close to leader Perley.

Said the Vernon, CT driver, “We started off slow. We were a little tight in the beginning but then we got better and better. With about five laps to go, however, the right rear started going down. When I caught up with Chris with two or three to go I couldn’t even turn the thing. I was nervous racing with my teammate Russ Wood there. I didn’t want to mess anything up and I didn’t know where the 84 was. I know the point battle is a stress thing. I’d like to thank the fans for coming out and Jeff Holbrook, Brian Allegresso and the entire team for letting me drive this car.”

Jeff Locke, after a damaging crash in practice on Saturday, brought his 37 home third, battling by newly crowned champ Wood in the waning stages of the 50- lapper to do so.  “I’m so proud of my crew. We really struggled in practice hitting the wall, and tearing the front and rear end out of the car. To put this thing back together and come back here to a third place finish makes me really proud of everybody. This R&R Engine is great. Guess that’s why Perley runs them.  To finish third racing with Russ Wood and some of these other guys is unbelievable.”

A throng of family and well-wishers surrounded Wood after a fourth place finish, which garnered him his seventh ISMA, title to boot. “The car was pretty good today. This race was awesome and it’s awesome to watch Chris race ahead of you. We had a tough battle going and I was waiting to see what would happen with the 84. But, it was a tough one for him. It’s been a tough year. My guys are great and nobody quit. Things just went our way and it’s pretty awesome to win the championship for Jeff Holbrook and the team.”

Qualifying heats for Sunday’s ISMA World Series 50 were completed on Saturday with Perley showing the way in the first heat with Rob Summers and Wood picking up the final two prelims. With all the marbles on the line, lady luck turned her back on the young Canadian Mike Lichty in the second heat when just after the halfway mark, while running second, he slowed suddenly and pitted. A blown motor was the cause. The team worked the remainder of the day and into the night to swap motors from the wrecked Lichty 74, driven by Ryan Coniam, which would be damaged in the third heat.

The next heartbreak for Lichty came quickly on Sunday. Three laps into the race, just after Jeff Locke wrested the early lead from Dave Duggan, yellow flew for the 84 of Lichty. A broken wing was the culprit. As the flag fell for the restart, Lichty’s crew in the pits frantically worked to fix the problem, but the team missed the call.

Just into the fifth lap, yellow flew again for the 2 of Eric Emhoff who spun low between one and two but the damage came to the 17 of Ben Seitz and 41 of Bob Magner who both slammed into the cement wall trying to avoid the 2. All three cars were done for the day.

This slowdown, however, allowed Lichty to get back into the fray, albeit down two circuits to the leaders.

On the restart, Russ Wood got the jump on Locke to take over the lead, chipping away at Lichty’s point lead as he went. Locke stayed in second with Ted Christopher in the Booth 61 soon tapping on his back door. But, right behind Christopher, just as quickly, was Chris Perley, trailed by Rob Summers and Dave Duggan.

A back and forth battle for third developed between Perley and Christopher as Wood and Locke moved slight away from the lead duo.

Yellow hit again on lap 13 for Dave Gruel, who spun, just as Perley had gotten by Christopher, a pass that was negated.

The race restarted. Wood and Locke were out front. Perley passed Christopher again but yellow flew again and back behind Teddy went Chris. This yellow involved the 88 of Joey Scanlon and the 9 of Eddie Witkum Jr. with Pat Lavery coming to a stop just missing the two.

On this restart of lap 15, Perley walked by Christopher on the backstretch, making the pass stick this time. He got by Locke soon thereafter. Unfortunately, Christopher was beginning a backward slide due to a tire going down and he would pit for good on lap 22. He would also go on to win the 150-lap Whelen Modified Tour event a little later, which more than made up for his early supermodified exit.

On lap 17, Perley danced by Wood in the same spot he got by TC and took over a lead he was not be challenged for until late in the going. On lap 22, Mark Sammut’s top ten run came to a halt when his driveshaft broke. It was at this juncture that Christopher also parked the Booth 61.

At the midway mark, Perley held a healthy lead over Wood, Summers, Locke and ironically, Mike Lichty, who had moved into a fifth place spot from the rear, but not on the scoring charts. Trailing Lichty were Duggan, Craig Rayvals, Otto Sitterly, Bob Bond and Joey Scanlon.

A slowdown came on lap 34 when Duggan’s strong run came to and end when he slowed and had to head pitside.

At the green, Perley pulled away and had an easy time of it for the next 10 or 15 laps until Summers began to close up the gap. Perley came upon a lap car with two to go, but Summers lost ground here due to the aforementioned deflating tire.

Jerry Curran (Morton 70) arrived Sunday morning and was added to end of field.