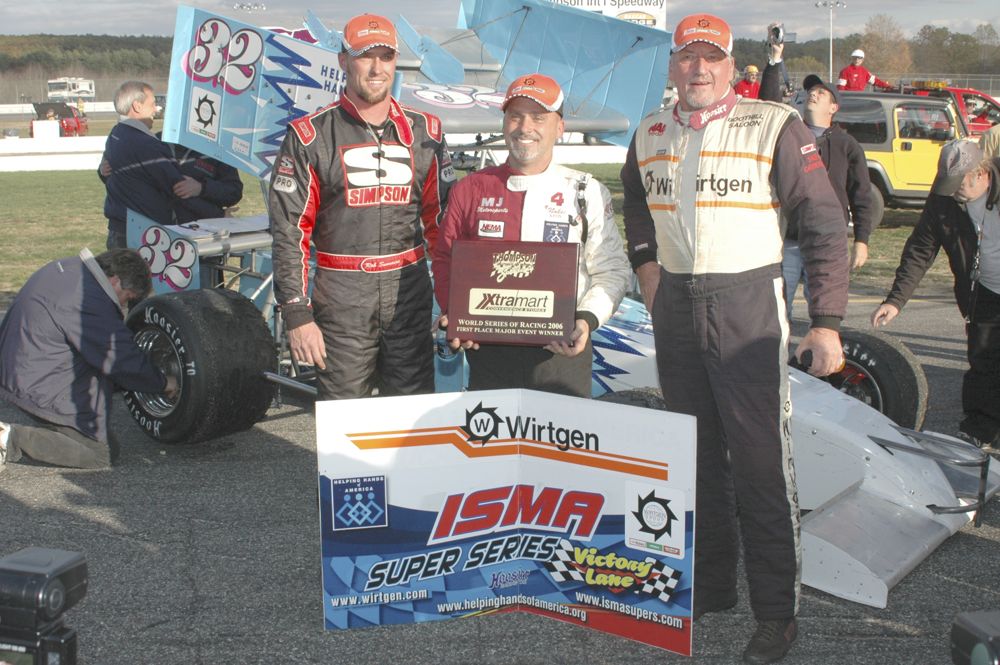 Thompson, CT – Sunday Nokie Fornoro became only the second driver of the ISMA season to win more than once besides Chris Perley of course. Chris Perley had won ten record-shattering features up until this point and was looking like he’d take home number eleven. But, for Perley the luck pendulum swung the other way at the ISMA finale when a broken shock sent him to the pits on lap 31, just 19 laps shy of victory lane. Starting 11th, the 11 moved into the lead by lap five and was a county away from second place runner Nokie Fornoro when the shock let go. Fornoro, who had won at Toledo, Ohio in June when Perley had one of his two dnf’s, was on hand to take the win at Thompson when Perley had his third non-finishing event. Nokie, in regard to his win and his gaining a second place in the final ISMA standings indicated that Perley’s dnf was an assist.

“I found out today we were nine behind Louie for second. I’m not sure how the ISMA points work. I was hired to drive a racecar for Soule Racing and to win races. We haven’t had a great year so far but getting second in points is great. My hats off to the Perley-Miller team. Those guys are awesome. You saw that today. If Chris didn’t have a problem, I think he would have lapped all of us. He deserved to win but we’ll take this win and just build on it from there with the team. I’m sorry I couldn’t run the midget today because something happened to the car, but I felt we could have won that one so this makes up for it. Before I go I want to thank every one of you people for spending your time and money on a beautiful weekend here at Thompson Speedway. For ISMA and NEMA and every one I am associated with personally, thank you for coming.”

A black car with orange numbers owned by Vic Miller pulled up in the win circle in second place but it was Perley’s teammate Bentley Warren who was the pilot. Bentley, who won the Oswego Super Nationals for Miller, was chasing Fornoro at race end. The applause was thunderous as the New England legend disembarked from the 71. He had praise for Fornoro’s run out front. “I think Nokie was going too fast for me. We had a fuel problem the last six laps. I think he would have beat me any way. He’s an awfully good driver. He knows what he’s doing on a racetrack. It was a fun race. Chris Perley, Vic Miller and all those guys on the crew put a heck of a racecar together. It’s just awesome driving for them. It’s so much fun.”

Warren, who has won supermodified races at Thompson in 1980, 1988, 1991 and 1993, was reminded of his longevity in racing and was asked by the announcer the question as old as he is, ‘are you ever going to retire?’ “Who knows?, he smiled, “Maybe someday I might. But not right now. I’ve having way too much fun.”

In third was essentially another local hero in Robbie Summers. Summers, who has divided his time between the modifieds and the Lane super this season, stayed in the hunt all race long pulling into third behind Warren and Fornoro with fifteen to go. He paused quickly for a podium finish photo before heading to his modified saying, “I’m really happy for the Essex Seafood team and Howie Lane. I thank them for giving me a chance to race the super. These cars are awesome. To get to race with Bentley Warren and these guys is great. I hope I can do it again next season for sure.”

Thirty ISMA supers were gridded for the season’s finale at the World Series but one, Ricky Wentworth, would break before a lap was in. This scenario was played and replayed throughout the 50-lap event. Joe Petro took up the early lead but the crowd watched in awe as Perley picked off one or two cars a lap to take the lead from the 33 in the fifth circuit.

Yellow flew one lap later for a tangle between Dave McKnight Jr. and John Payne. Eric Emhoff, Mike Badessa, Michael Barnes and Brandon Bellinger made exits into the pits at this time with only Bellinger, McKnight and Payne returning.

One more lap, one more yellow as the 90 of Ray Graham Jr. slid off the back stretch into the grass. He hinted that he had help by gesturing to another driver before taking his place at the rear.

Back underway, Perley, who had won the last two World Series events, was on his way to a home run leaving Petro, Doug Didero, Lou Cicconi, Fornoro, Justin Belfiore, Summers and Warren to fend for themselves.

Moving up lap by lap were Fornoro and Cicconi, intent on keeping the Rowley Rocket in the same zip code. By lap 13 Perley was gliding through the back of the pack carefully picking off car after car.

By the midway mark Perley was well in command as Scott Martel, Dave McKnight, Vern Romanoski and RD Timmons had retired to the pits. Petro remained in second ahead of Cicconi, Fornoro, Bentley, Summers, Didero, Belfiore, Bob Magner and John Torrese.

Five laps later, the black 11 came out of three and slipped off the track in turn four. At first it looked like a miscue, but as Chris ran into turn one, it was evident he was slowing. When the leader came to turn the clock to lap 32, it was the 32 out front. A broken shock, which almost cost Chris a win at Stafford was the cause. Perley said later that at Stafford he was able to stay in the race and to win, but at Thompson it was out of the question.

Fornoro wasted no time taking over the lead and regaining Perley’s large lead. The nearest contender would soon be Warren as Petro’s strong run ended on lap 36 as he followed John Payne into the pits.

On lap 40, Doug Boisvert pulled the 66 in smoking as Fornoro was heading for win number two. On lap 44, Nokie almost lost his bid when the 70, driven by Kyle Carpenter, spun in front of him. I had a scare there when Kyle spun in front of me,” said Fornoro. “I dodged one spring in the air that about hit the wing. And then a right front tire came across. We got through it okay but I was hoping that we didn’t pick up any debris on the tires. A lot of cars run the carbon fiber and that will cut the tire down.”

Carpenter was hooked out of the race while Ray Graham made a pitstop. It would be his last also.

The yellow gave Bentley one last chance at Fornoro but there was a lap car in between. Nokie pulled quickly away while fourth place runner Lou Cicconi was called for jumping the green, which cost him a penalty that dropped him four spots in the finish.

One more car, Mike Lichty, fell victim to attrition on lap 47 as Fornoro cruised under the checkered, followed by Warren, Summers, Didero, filling in for Mike Ordway in the Booth 61 and Bob Magner. Justin Belfiore and John Torrese were scored ahead of Cicconi with Jeff Holbrook and Craig Rayvals behind to complete the top ten.

On November 11 at Turning Stone Casino, Vic Miller and Chris Perley will be crowned ISMA champions after one amazing year of racing which may never be duplicated in ISMA competition. Eleven wins between two great drivers for one great car owner – congratulations are definitely in order! As Chris said at Berlin, I can’t believe we won ten races in one season and the championship. This is awesome.”

He’ll definitely have more to say at the banquet about this season!