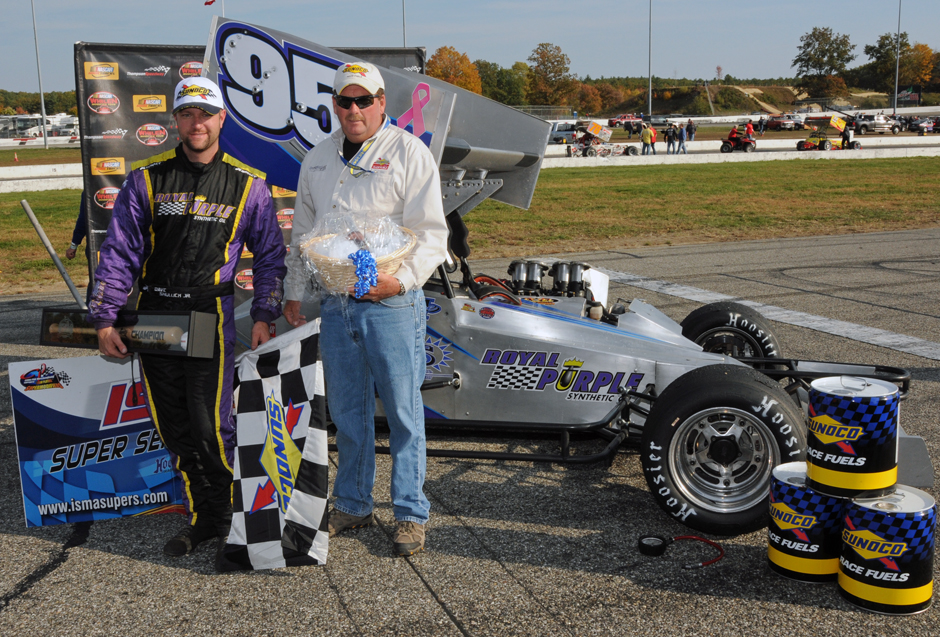 Thompson, Conn. – The run for the 2016 ISMA championship was one of ups and downs for the two main contenders, Dave Shullick Jr. and Mike Lichty. It seemed when one did well, the other would not at almost all of the events throughout the schedule. They took turns at the top of the standings and that trend continued to the season finale at Thompson Speedway Motorsports Park World Series of Racing this past weekend.

Mike Lichty had a 39 point lead going into the weekend. Shullick won his heat gaining 10 points. Lichty finished his heat in third picking up 7. It then, was Shullick’s time to move to the top if the upward-downward swings continued. And it was déjà vu as Dave started 6th, took the race lead on lap 7, never to look back. Lichty, on the other hand, started 9th and was working his way forward when on lap 32 the 84 slowed and pulled into the infield on lap 33 to end his day and his chance at a second ISMA title. A broken left front shock was the heartbreaker for the Canadian.

Shullick went on to pick up a second consecutive ISMA World Series win with a second ISMA championship to go with it.

Shullick commented in victory lane, “The car was amazing all weekend. We only fought one gremlin which we actually figured out right before the feature. We just tried to be smart with it and not make a mistake. I figured we’d be good at the end and it was. I have to thank Jim Bodnar who didn’t come this weekend so he put all the pressure on us and we were able to deliver. Mikey (Lichty) had some problems today and that’s the way the season has gone. I would  have a break and then a win then he’d have a break and win. To end this way and win the championship just tops off a tremendous year for us. I don’t know what happened to Mikey, but we were each running for the championship and he didn’t make it to the finish. Hats off to him and the tough battles he gave us all year. This one is for Jim Bodnar and the crew and all they do for me. I’m the lucky guy who gets to drive this thing. Thanks to Elios Financial Group, Royal Purple and Level Performance for their support.

Mike Lichty was almost more disappointed for his crew, than for himself. He said later, “It’s just been one of those years. The little DJ and I got to race together we had some great battles. Unfortunately, it seemed like I’d win – he’d break and vise versa,  all season. It sucks to come down to Thompson having the lead and loose it there. I talked with the crew later and we went back over the season. We kind of felt that Oswego hurt us most. We didn’t even get to race in that one and had a dnf. I’ve always said you have to finish every lap to win the championship and we didn’t even get to race there.  This year was like 2010 when I went to Thompson with the point lead and first had the motor break, the crew replaced that and then had the wing mount broke in the first or second lap and I was done.  Russ Wood went on to win and I didn’t really get a chance to race at all.

“You know I go into a race wanting to win, but the championship is for everybody on the crew who works hard all year and that is their reward. They get to stand up there in victory lane and share winning the championship. I felt bad for them. I have to thank a lot of people – Craig Reed, Reed’s Salvage, the Reed family, my father and PATCO and everybody who helps out. What is really bad now is that we don’t have another race until spring! So, we’ll sit down and figure out next year during that time.”

Windham, Maine second generation driver Mike Ordway Jr. had a strong run in the Booth 61 supermodified to finish second. It was Mike’s first season in that car, a former ride of his dad Mike Sr. Mike unofficially should finish in the top five in points capping off a successful season.

Third place went to Mark Sammut who had a tremendous battle for the podium with Ben Seitz right up until the waning laps of the event. Sammut, too, should fall into the top five in the final point standings.

Mike McVetta and Dan Bowes were the front row for the 50-lap season finale with Bowes taking the point to lead the first lap.

Yellow fell on lap 6 to half Bowes’ progress, as the 12 of new-comer Jake Smith of Stroudsburg, PA, a former NEMA driver Jake was pushed back into the fray while teammates Dan Shirey and Trent Stephens both made pitstops.

The restart saw Bowes take off as Dave Shullick, Jr. moved into second after a battle with McVetta for the spot.

The race slowed one lap later when Shirey brushed the wall and came around in the front stretch, ending the day for the Ohio driver. In the interim Stephens and Smith pitted.
Shullick, on a mission to win the championship, grabbed the lead from Bowes on this restart and promptly pulled away knowing point leader coming into the race Lichty was somewhere behind him and also fighting for the title. Behind him were now Bowes, McVetta and Ben Seitz, with Mike Ordway Jr. pressuring Seitz and taking third a lap later.

By lap 10, it was Shullick, Bowes and Ordway already pulling away from McVetta, Seitz, Mark Sammut, Timmy Jedrzejek, Lichty and Chris Perley.

Shullick began to put cars down and the laps sped by making the boys behind to fight by the lap cars in between them and the leader.

At the midway mark, Shullick had a healthy leader with Ordway Jr., Bowes, McVetta, Seitz, Sammut and Lichty who had moved into seventh ahead of Timmy J and Perley.

Shullick’s road to the championship shortened as he increased his lead over the pack by adding one lap car after another, but the race finally slowed again on lap 31 when the 27 of Jamie Timmons spun between turns three and four. He would restart and interim pitting was done by Dave Duggan and Star Classic winner Moe Lilje.

The field took off again but incurred another slowdown when Timmons experienced another spin. He would pit and return.

It was on the next restart that the drama of a season-long point battle began to come to and end when the 84 of Lichty slowed noticeably, dropping backwards. The dreams of a title faded here and ended when Lichty pulled into the pits moments later with that aforementioned broken shock ending his run.

With the race win and the championship now in sight, Shullick ran away out front. As Ordway Jr., finally clearing the lap cars in between his 61 and the 95, he tried valiantly to catch up to the high-flying leader but time was running out.

With five to go, it was Shullick and Ordway Jr. pulling away out front leaving Mark Sammut and Ben Seitz to go wheel to wheel for third. McVetta, Jedrzejek and Perley ran top seven while Mike Netishen, Alison Cumens, and Joey Payne in the Penix 3, rounded out the top ten. High attrition saw nine of the starters sitting pit side at the end.

And, that’s the way they finished as the double checkers flew for Shullick and the 2016 ISMA season.

Due to time restraints, the top three stopping in victory lane was nixed, with only Shullick  in the victory lane ceremonies with awards presented by the host track and race sponsor Sunoco.

The annual ISMA Awards banquet will take place November 19 at Turning Stone Casino which will honor all the season’s achievers.