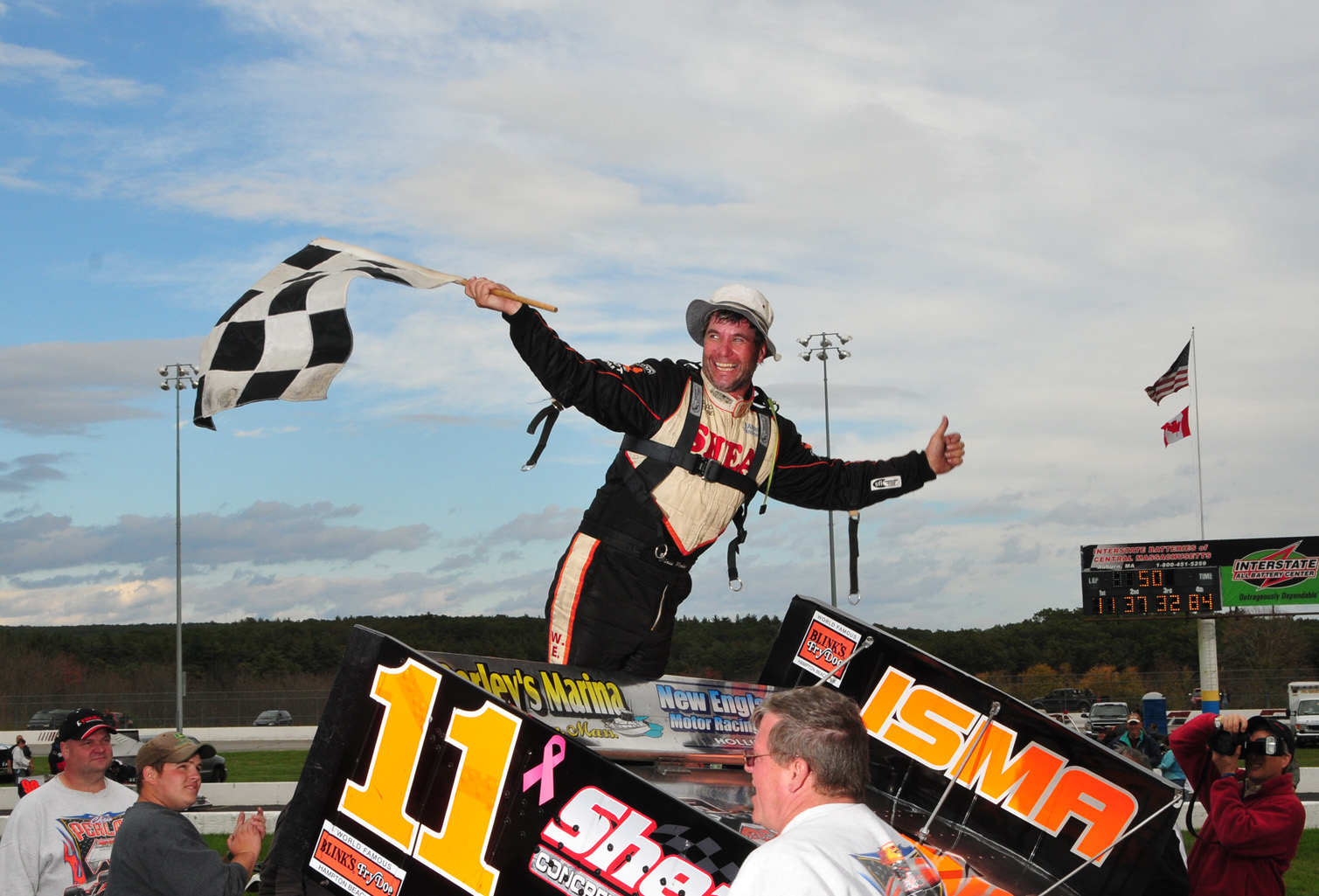 Thompson, CT – It wasn’t a tremendous surprise to anyone when Chris Perley pulled the Vic Miller 11 into victory lane on Sunday at Thompson Speedway. After all he’d been there eight times before. His first World Series ISMA 50 win came on Oct. 15, 2000 and he’s only been out of the winner’s circle at that Connecticut oval three times since. He only took seven laps to move into the frontrunner spot from his 11th place starting position. His complete domination of the supermodified portion of the famous Thompson World Series is undeniable, as the record books show, but Perley himself can’t quite explain why.

He shook his head in victory lane and admitted, “I don’t think the domination here has a lot to do with me. Every time we unload here I just can’t believe it. I just sit in the car and drive it. The car seems to love it here. I don’t know what to say really. We don’t break down. The crew gives me an awesome car.  Thompson has been just great to come to every year. I kind of wish we came here more often but I wouldn’t want to take anything away from what we have right now. I don’t want to wear it out. It’s just incredible. Happy to see the weather came out great this weekend and all the fans who all came out to see us. I’m happy my family made it too. It’s just that I have a great car, great sponsors, great motors for a great track and it’s a great day.  Congratulations to my car owner Vic Miller on his seventh ISMA car owner title. It was great to race for him when I could this year and it’s been great every year. You just can’t beat all of this.” 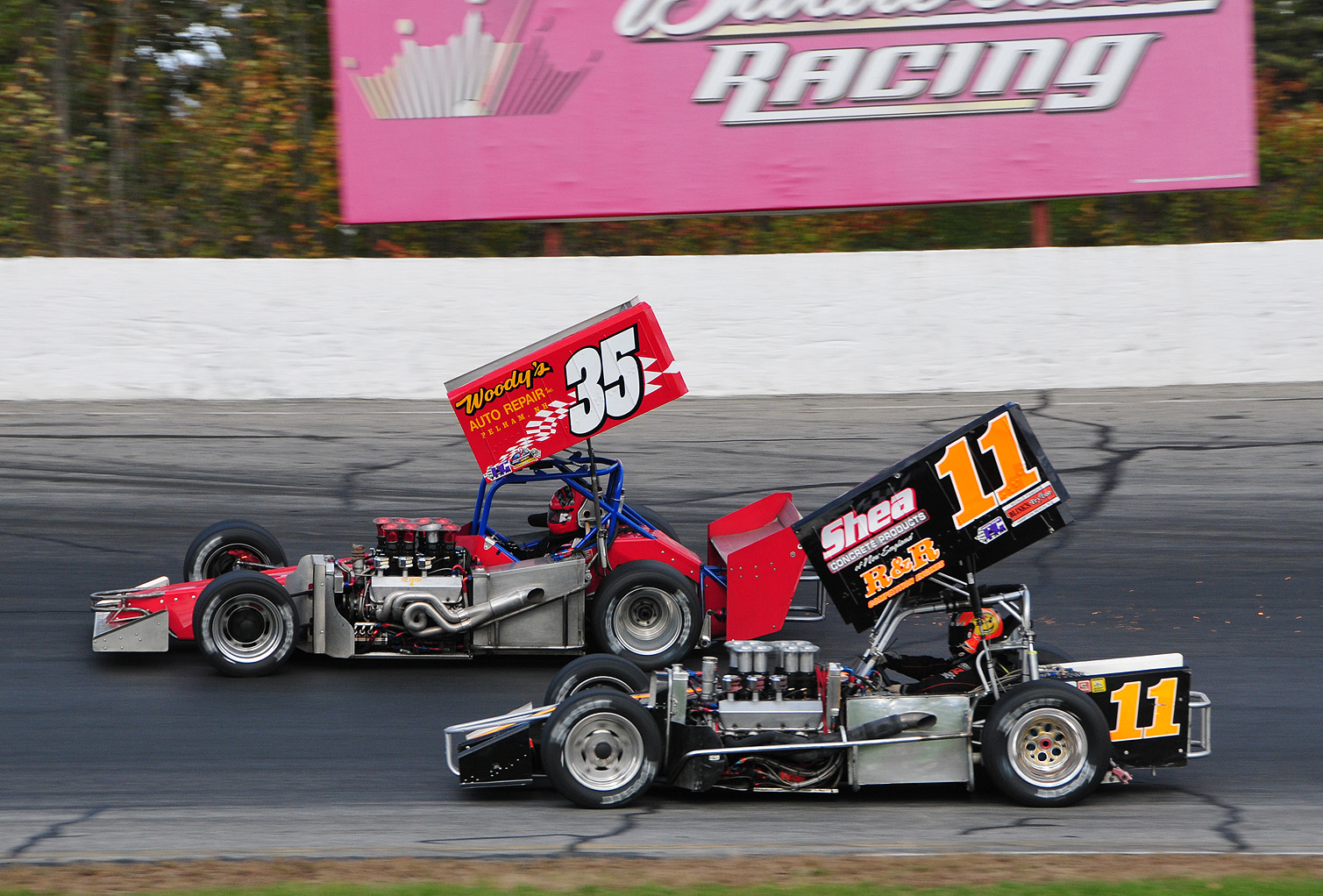 Having an exciting run to finish second was Raymond, NH’s Jeff Locke who got to lead one lap before the 11 stormed by. Locke had some strong challenges, especially toward the end of the 50-lapper from Timmy Jedrzejek, but he held onto the runner-up spot. He said after the race, “This was awesome. I have to thank Richard (Witkum). The car was really good. I didn’t have a whole lot for Chris. I could stay with him but that was about it. Congratulations to him and the whole team. They obviously have this place figured out. I’m really happy to come home second. I have to thank my father and my family for sticking with me. This is a great finish to a pretty crummy year for us. I’m very happy.”

Also very happy was third place finisher who finished up a pretty good year with his new car owner Dan Soule.  “This was a real good run for us. The whole team did a great job today. We adjust yesterday and I hadn’t been to this place in ten or twelve years. So we’re pleased with what we have as a crew. We started off the race a little slow and I think I dropped back maybe to tenth or so. Then the car started to come to me and we weren’t so concerned about being fast at the start of the race but we knew we had to be fast at the end. I thought Jeff and I had a pretty good battle for a while there for second. I just couldn’t hold it with him. I’d get there on those last couple restarts and he’d just pull back around me on the next lap and then I couldn’t do anything after that. Congratulations to Chris and Jeff for first and second and we’ll go happily home to Ohio with third.”

Canadian Craig Rayvals had the pole for the ISMA 50 and took advantage of the spot to take the early lead but on lap 7 the 37 of Locke took over and only one lap later Perley absconded with the point and the eventual win.  Locke would have to contend with a strong runner Jon Gambuti in his 14, a former Cicconi-owned machine. Behind Jon were the likes of Rob Summers, Rayvals, Mike Lichty, Johnny Benson, Jedrzejek and Russ Wood.

Dave Sanborn, in the Lane 9, flew the first yellow on lap 15 with several pit stops made in the ensuing slowdown by Ben Seitz, Brandon Bellinger and then Johnny Benson Jr. Benson had unintentionally tagged his own teammate Lichty, cutting a tire.

The restart attempt brought out another yellow when Bob Bond grazed the front straight cement wall and was hooked out of the event. Ray Graham Jr. also parked the 90 and Louie Cicconi, driving the deRitis 66, another of the Aston, PA driver’s previous machines, also called it a day.

Finally back underway, it was Perley pulling away from Locke and Summers putting Gambuti back a spot into fourth. The 11, which was on rails was ticking off some 16.6 second laps, but Chris wasn’t pulling totally away from Locke, but not really threatened either.

At the midway mark, it was Perley, Locke, Summers, Jedrzejek, Lichty, Jon McKennedy, Gambuti and Witkum, working his way up from 23rd starting spot.

Just prior to lap 30, Benson pulled the 74 pit side and a lap later, Summers followed suit out of third. Overheating caused the demise of the 35.

Yellow flew on lap 35 when the 28 of Bob Dawson puffed an ominous cloud which turned out to be just water. On lap 40 Dan Bowes caused another slowdown and one lap later it was Moe Lilje’s turn to drop the flag.

These last couple of restarts bunched the field and although Perley pulled away cleanly, some torrid racing ensued between Locke and Jedrzejek and Lichty and Witkum, which continued to race end. At the checkered Perley had done it again, picking up his fifth in a row with Locke, Jedrzejek, Lichty and Witkum the top five.

Lichty, in his first ride at Thompson in the car he’d taken to a King of Wings win at Oswego, said of his fourth place.  “For what we had all day yesterday after bringing a new car that I’ve never driven here which is definitely a fast place, we were out to lunch. I was better in the heat race yesterday but the wing kept coming over center and I just adjusted way too far on the wing. I wasn’t letting it come down enough and that’s what killed us today. Our straightway speed was definitely not there. But, the car was decent. We started out a little loose but I think if the wing came down we would have gained more positions. I just have to thank dad, Craig Reed, Dickie, the whole crew and my beautiful car owner Raven Reed Racing.  It’s the last race and it was a bummer because now we have to wait five months now to go racing.”

Witkum was more than pleased with his fifth, which unofficially earned him an extra $100 donated by Bio-Based.us as the Hard Charger. “It wasn’t a bad race for me at all. After not running the heat race and starting 23rd, fifth feels like a win. The guys did a great job. I have to thank Howie, my Uncle Bob, Pete, Wally, Tony everybody just kept the think in one piece and I had to do my job. So, that’s all I could get out of it. We traded a little paint with Lichty battling for fourth but that’s okay. He was a little bit better than I was. He was a little loose off and I was tight off.”

Vic Miller, whose 11 car was credited with 7 wins in 2011 thanks to Perley and Lou Cicconi, has clinched the ISMA Car Owner of the year title, his seventh. He said briefly amidst the chaos of pits at tech, “That was a great run Chris had here today. I finished up a good year. I wish he could have run all the races this year, but we had a bunch of different guys that really helped out like Louie Cicconi, Vern Romanoski and Otto Sitterly, so it was a great year. We’re really happy. It couldn’t have been better. And, it’s great to get a 7th car owner title.”

In his hauler, Russ Wood also acknowledged what should be his 8th ISMA Driver Championship and giving his car owner Jeff Holbrook a runner-up spot in the Car Owner division.  “We finished sixth today and we did what we had to do. Everybody did a good job and we’re just happy to get the driver’s points deal. Congratulations to Chris and Vic. They had a really super year. That’s about it. It’s over and done with and now we relax. It’s a little odd to be the driver champion and have someone else be the owner champion but it’s a team sport and even though it’s a driver’s championship, this team is 100 percent behind it. So it is what it is. Even though we made the sacrifice to go to all the races, we did well and this is the end result. We’ll take it.”