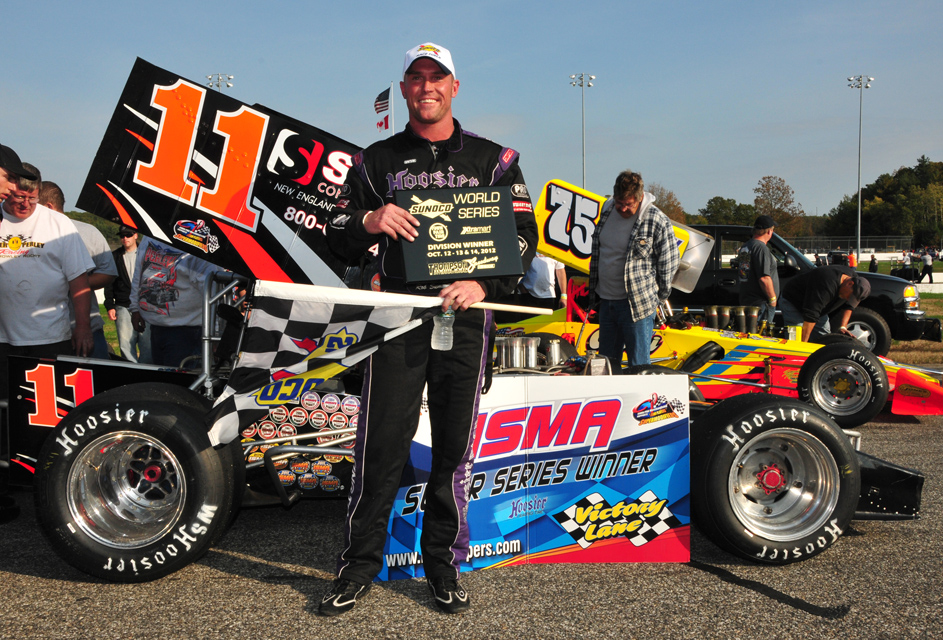 Thompson, CT – For the sixth straight year the Vic Miller owned number 11 supermodified sat in victory lane at the Thompson Speedway World Series of Racing, but the driver this time was not Chris Perley, it was Vernon, CT’s Rob Summers. Ironically, Perley was in the field for his first time out this season in a new Miller creation, but he did not survive a massive wreck on the green flag lap which took out seven of the twenty-four starters. Summers started eighth in the field and waged a torrid battle with Lou Cicconi for the lead for many laps until pulling ahead of the 75 with just 15 laps remaining in the 50-lap main.  It was a fitting end to a somewhat bittersweet season for the entire Miller crew. The win was Summers’ second this season after taking over Perley’s ride in June.

“I’ve got to thank the guys and Chris Perley. They gave me such a good car today. It’s such a great opportunity to drive a car like this. This is a special day for me to get one of these Thompson plaques from Don Hoenig. It means a lot to me, and this team, to end the season after Mike Woodworth passed away. I think he’s smiling today like he always did. This is huge. I have to thank Performance Technology for giving us a lot of power, Vic and the crew, John Holland, my dad, Ed Shea and all the people who help pay the bills. Thanks also to the fans for coming out today. It means a lot.”

Cicconi, who had a mathematical shot at the 2012 ISMA title going into the day’s race, gave it his all but fell short of his goal. He said in victory lane after finishing second, “It was a good run. I really thought I was going to win until Robbie got next to me.  I was in a heated points battle with Mike Lichty and   I think I won the fight he won the war.  I think we got second though. We’ve been struggling all year but getting a second to Robbie is pretty good.”

Jon McKennedy brought his Dunigan-owned 79 in third after Mike Lichty, running third on the track, was penalized after a jump on the restart of a lap 39 accident involving Star Classic champ Russ Wood. Said McKennedy, “We were just way too loose. I’m disappointed. We were one of the fastest cars yesterday and we sucked today. Yesterday I had high intentions to win this one today but it just didn’t work out. We started tenth and the car got looser as we went along. We got third but I’m not too happy with it.”

Lichty, who lost only a few spots in the finish because attrition had taken its toll on the field, picked up the 2012 ISMA Championship, his first and the second for his dad’s PATCO team, which garnered the first Canadian championship in 2001 with Dave McKnight the driver. Lichty was more than pleased with the achievement but a little disappointed that his main adversary, Timmy Jedrzejek, was not in the race due to a devastating practice accident on Saturday. Lichty commented on his year and what the title meant.

“It’s been a pretty good year to be honest. I think we’ve run five or six second places. We came out strong at the beginning of the year with a win at Stafford. I would have definitely liked to get a few more checkered flags, in order to win the championship. Timmy (Jedrzejek) did a good job this year winning three features, but they had some other shows where they didn’t run as strong. We had just the one dnf at Oswego’s King of Wings. It’s been a consistent year. We basically stayed in the top three. What I’m upset about is not being able to race Timmy for it. Seeing him crash out yesterday is definitely not how I wanted things to go. In the same token I guess we’ve raced all year for the title.  It’s great to bring the title back to Canada. Dave won it in 2001.

“The biggest thing is that the title is for everybody who puts the time in working so hard. It’s a team effort. I’m not here doing this by myself. The title is for them. It would have been nice to go out in style but winning the race today along with the championship. But it was a good season. We didn’t tear up equipment. Now, we’re looking forward to next year. We’re not really sure what we’re doing. We have some things in the works. I think we’re putting together an Oswego car for some races. We will definitely run ISMA still. The big goal is to win the (Oswego) Classic.

“I have to thank Craig Reed and Reed’s Salvage, Deanna, Raven, PATCO Transportation, my father, everybody that puts effort into the team, Stage Door Transportation, Rockway Building Supplies, and Johnny Benson Enterprises.”

The ISMA season finale did not start out well at all as just as the green was dropped on the event, mayhem broke loose when the 37 of Jeff Locke got sideways off turn four. Locke tried to correct but collected Jon Gambuti who started next to him and suddenly cars were scattered all over the front straight and red fell. Eight cars were either towed or pushed to the infield with only Locke able to continue. Justin Belfiore, Dave Duggan, Chris Perley, Eddie Witkum Jr., Mike Ordway Sr., Jeff Holbrook and Gambuti were done before they got started. Locke restarted at the tail of the field.

Bob Dawson led the way for the first lap but yellow flew quickly for a spin by Dan Bowes. On the restart, a determined Lou Cicconi took over the point, leaving Dawson, Lichty, Ben Seitz, Summers and the rest to duke it out behind.

A second harrowing incident occurred on lap 8 when Jamie Timmon’s 27 was pinched into the fourth turn cement wall sending him down the front and into the grass with a tire and parts flying with him. Timmons was okay but the car was not.

The race settled into a long green spell after that with Cicconi, Lichty, Summers and McKennedy and then Russ Wood taking command of the front of the pack. High-speed action had the crowd on the edge of their seats as the quintet flitted back and forth attempting position swaps.

By the halfway mark, Summers had put the 11 on Cicconi’s bumper, but Wood, Lichty and McKennedy weren’t far behind. Each lap produced some breathtaking maneuvers by Summers as he tried to dethrone Cicconi. Gradually some slower cars came into play up front but the duo handled them with precision.

Finally in the 34th lap, Summers made the move that stuck and the 11 crossed the line in front of the 75 to lead on lap 35. Four laps later as Rob had just begun to build a lead, Russ Wood brought out the yellow when he slowed with what looked like a tire going down and he spun around in turn three. The 29 was hooked in but the crew couldn’t make the tire change and Wood was done.

It was on this restart that Lichty, got a little ahead of the green moving by a lap car, Tim Ice. He would stay in third place on the track, but was relegated to the tail of the lead lap cars, which would be seventh in the final run down.

At the green, the famous black and orange Miller 11, which had been seen victory lane nine times at this Thompson event, cruised out front to the double checkers. Cicconi, McKennedy, Ryan Coniam and Bob Dawson finished up in the top five, with Mark Sammut and Lichty the last cars in the lead lap. Craig Rayvals and Tim Ice, in eighth and ninth were the last cars running on the track as the checkers flew.