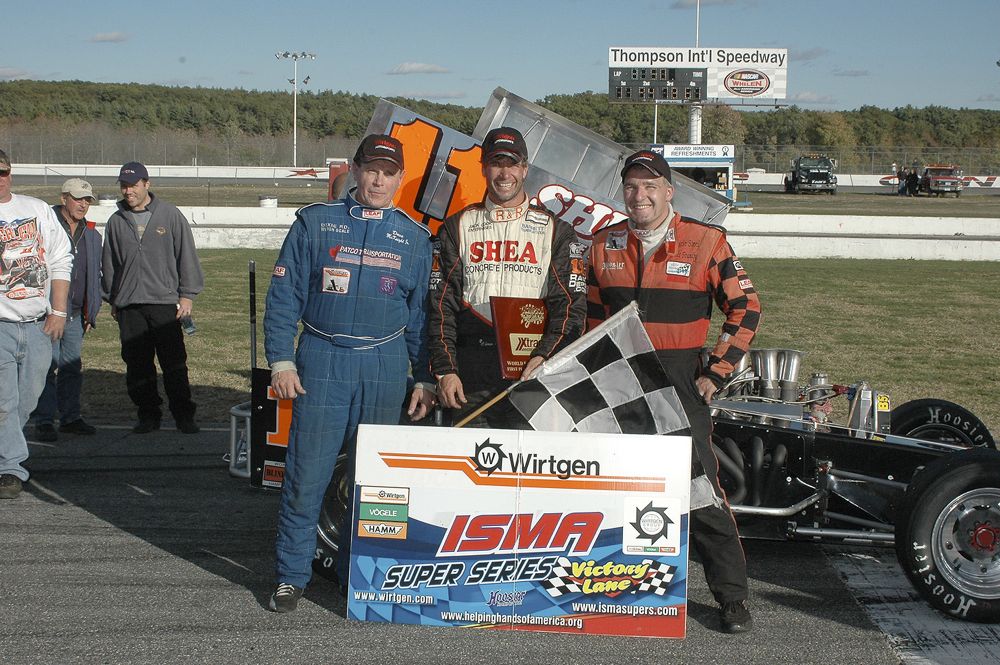 Thompson, CT – Chris Perley put a cap on another phenomenal race season by adding the ISMA portion of the Thompson World series to his feature win list on Sunday. His eleventh win of the year topped his record-breaking ten win total of 2006. It also upped his All-Time ISMA wins to 50. While he had already claimed his fourth ISMA-Wirtgen championship, the victory was satisfying nonetheless. His main competition was once again Dave McKnight and for a while it seemed like Canadians were everywhere near the front fighting for the win. But, at the end, it was the Rowley Rocket carrying the checkered flag around the Connecticut oval.

“ It was tough out there,” said Chris in victory lane. “I knew Dave and Mike were going to be my toughest competitors because of the way they both were running yesterday in the heats. For a while I didn’t have much for Dave. I was just trying to keep in touch with him. He’d get through the lap traffic and he’d get some distance on me. So I just tried to stay with him. He ended up getting a little tight. I was a little loose. Then my car kind of came around toward the end. I didn’t know if I could stick on the outside but I thought if I could show him a wheel I might be able to hold him down. That was the only shot I had.

“What a race. This is just awesome. I want to thank everybody for coming out and watching us here today. I hope we put on a good show. My R& R engine really came to life today. And thanks Ed Shea, what a benefit he’s been to our team. All my sponsors are important. I just can’t say enough about my crew and my car owner. To win another championship this year is unbelievable. It’s been one heck of a season. I’m just really proud to be part of this team. I have to say a special thanks to my family for putting up with me while I do this. My wife and kids, my dad at work – all of my family- they are the ones that give me the opportunity. I couldn’t do it without them.”

Dave McKnight caught up to his teammate and race leader Mike Lichty just before halfway of the 50-lapper, taking over the lead with a move on the front straight. But, McKnight, in an oft-repeated scene this season, lost the point to Perley just thirteen laps shy of the finish. The Brampton, Ontario driver has become resigned to finishing second to the champ. “Hats off to the whole team. Hats off to Paul and Glenn of Fourth and Fourth Racing. They built us a great motor this year. What can I say? Chris has been dominant all season. Here I am second again. This is getting old. Hey what can you do? He’s raised the bar. But, we’re getting close. We just have to tune up a little bit more and then we’ll see what happens next year.”

Another Canadian followed McKnight to the finish. Mark Sammut capped off a great season also with a third place in the race and a possible third place in points after the tallies are in. “I’ve got to hand it to Chris Perley and Vic. They are the class of the field. Dave and Mike were definitely faster than we were today. We were decent all day, all weekend really. But we ran our own race and at the end of the day we were happy to finish third. I think we may have ended up third in points and if we did that would jack up a good year.”

Joe Petro and Ohioan Gene Lee Gibson, in his first Thompson appearance since 1995, led the way to green. Petro grabbed the lead for one lap before Mike Lichty stormed past in three to take over, trying one more time to get that elusive first ISMA win. Petro stayed in second until young Michael Barnes took over on lap 7.

Caution flew for Vern Romanoski one lap later with pitstops being made by Lou Cicconi and Bentley Warren, driving the LaPrade 68. Romanoski and Warren restarted at the tail while Cicconi was out of the action.

Three laps after the restart, Dave McKnight moved past Petro for third and began pursuit of Lichty and Barnes while Perley moved into fifth.

Jamie Timmons brought out the next yellow with a broken wing strut. John Payne and Jeff Holbrook pulled in here with Holbrook ending his day.

McKnight, a master of restarts, used this one to take over second with Barnes, a relative newcomer to the winged scene, left to try his best to hold back Perley. On lap 16 he lost the battle as the 11 moved into third.

The top four began to dive in and out of heavy traffic as Mark Sammut stayed in touch in fifth. Barnes began to drift back as 22 clicked on the counter leaving Lichty, McKnight and Perley to battle alone. McKnight came away with the lead on lap 24 leaving Lichty to now fend off Perley. Barnes, Sammut, Doug Didero and Gibson were still in healthy pursuit.

Perley moved into second one lap later and the race between the 94 and 11 was on again. In and out of traffic the duo darted while Barnes moved back into third, as Lichty appeared to be slowing while his teammate seemed to be getting faster out front.

Barnes’ great run ended in the wall between three and four when something may have broken in the Double Deuce Racing 22, putting him on his side against the cement. While the track was being cleared Joe Petro called it a night at the same time.

The restart of this lap failed when Lichty stopped between one and two with a flat tire. He got in and made the change and restarted at the rear.

Again the restart did not make muster as Bobby Haynes Jr. pulled off the track with flames and fluid spewing from the 44. He too was done for the day. Joey Payne, trying to help keep the Lehnert 92 in the top ten in points, made a last pit.

When the green finally fell, it was Perley and McKnight fighting tooth and nail for the lead, almost brushing at one point until Perley came out on top to lead lap 37 and the rest of the way home to victory. The win was Chris’ fifth in the 34-years of World Series supermodified action. McKnight was unchallenged for second while Sammut had taken over Lichty’s third spot earlier. Doug Didero moved into fourth with Lichty charging back up for fifth. The battle for sixth between Mike Ordway Jr., Justin Belfiore and Scott Martel was won by Ordway. Belfiore, Martel, Otto Sitterly and Dave Trytek finished up the top ten.