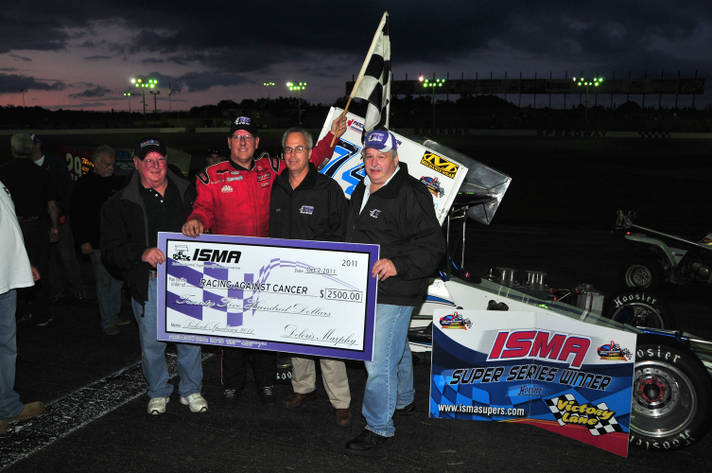 Seekonk, MA – Last year Johnny Benson Jr. of NASCAR truck fame, came to Seekonk Speedway for the first time to compete in the ISMA 100. He left Seekonk with his career-first ISMA victory after an exciting battle with Chris Perley to the end of the 1st annual Racing Against Cancer 100. Benson duplicated his feat Sunday at the Cement Palace with a few different adversaries, but an equally awesome run. Benson was able to present the $2500 ISMA check once again to the Racing Against Cancer effort and he also participated in the Cancer Team Walk on Saturday for one fulfilling weekend.

The former NASCAR Camping World truck champ started 7th in the field of 26 potent supermodifieds and had to work by Eddie Witkum Jr, swap the top spot with 7-time ISMA champ Russ Wood and then spend over half the race fending off the torrid advances of Louie Cicconi in his newly-purchased Vic Miller machine, a car which Cicconi had taken to two wins in 2011 while subbing for Chris Perley. Benson was finally able to clear some heavy traffic with less than five to go, leaving second place finisher Russ Wood a couple car lengths behind at the checkers.

Benson mentioned the traffic factor in victory lane, “I would have liked to see some open traffic in those last laps. I’ve got to thank Brad and Mike Lichty, Reggie, Duane and all the guys that work on the 74. The thing was pretty good tonight. I began to think toward the end there that I might have used it up more than I wanted to, but it just felt good. I remember from last year that you could run the car pretty hard here so that’s what we did.

“But those last 15 laps were pretty spectacular. The car was getting loose and sliding around pretty good. But I’m sure the other guys were doing the same thing. I don’t know if it was Russ or Louie who got beside me there but that woke me up. You have to be patient in traffic. You have to keep tires on the car. Sometimes you come up on guys and you kind of surprise them. You kind of click through when you do. When somebody puts the pressure on, then you have to go. I probably took a few chances out there, but outside that we did pretty good.

“Again I have to thank Brad, Patco Transportation and the whole Lichty family for giving me this opportunity and to Gary Sagar for having me come up here two years in a row. The hospitality has been great. The walk they had for Breast Cancer was a pretty cool success.  It’s been a good time this week. We appreciate everybody who has helped the cause. On behalf of ISMA, I get to present the check for $2500 for Racing Against Cancer. There are a lot of great people who help make this happen. It was great to be a huge part even though I only walked 25 laps!”

Russ Wood, who actually led the race briefly, and then had to get by Louie Cicconi late in the race for second, commented,  “It was a pretty fun race there. Johnny won here last year and I think he’s got this place down pat. We were good and then we were bad. I was having fun in traffic. I had a ball. Thanks to Gary from Kraze Korlacki Speed Equipment for putting this on and to everybody who has given to Racing Against Cancer this year. Every little bit helps.”

Rob Summers, in the thick of things all race long, came across in third after Cicconi got some help for a late race bobble. Said Summers, “I was running pretty good but toward the end of the race I got in a bad lane and got shuffled back. Then we were able to get back toward the front again. Russ was good but none of us were as good as Johnny. He owns this place. I can’t thank enough Jeff Holbrook, Russ Wood, JWJ Enterprises, Brian Allegresso and all these guys who gave me a great car tonight.”

The ISMA 100, which had been delayed a day due to bad weather forecasts, got underway just after 5 pm on Sunday with Dave Sanborn and Mike Ordway Jr. leading the strong 26-car field down to green. Sanborn took the early lead but his teammate Eddie Witkum Jr. came up and stole his thunder on lap 5.

Witkum survived a couple cautions for spins in those early laps but soon had Benson bearing down on his 97, until Russ Wood stepped in to give Benson a battle.

First Wood got Benson, then Benson got Wood, and then Wood got both Benson and Witkum to lead lap 28. But, that was the only lap Wood led. Shortly thereafter, both Witkum and Benson maneuvered through a pack of cars to put Wood back in third and Eddie back in the lead. Coming on strong in the meantime was Louie Cicconi, trailed by Justin Belfiore and Rob Summers.

On lap 31, Benson put the Lichty 74 into the lead thanks to some more traffic and the race was on. A quick yellow for Brandon Bellinger one lap later bunched up the field, but Benson was able to pull slightly ahead on the restart.

By lap 35, Johnny was back chomping at the tail of the field at the quick third mile oval.  Wood followed Benson through, diving high and low with Cicconi doing likewise. Witkum held fourth now ahead of Summers and Belfiore, trailed by Mike Lichty, Chris Perley and Jon McKennedy.

On lap 44, Cicconi, in one hairy, breath-taking move in traffic, got by Wood for second.

Just prior to the half way mark, things tightened up as yellow fell for Oswego Classic champ Otto Sitterly who had bounced off the track.  Several cars pitted during the time including Mike Lichty. Things got underway, only to slow up again when Jeff Locke repeated Sitterly’s spin.

A lot of water and dirt had been kicked up on the speedway and the race was red flagged for cleanup and a quick refueling due to the number of caution laps already run.

The race went green again on lap 55 and Benson was off like a shot, knowing Cicconi and Wood were right there now trailed by Summers and Perley. Minutes later Benson approached a tangle of cars, which put Cicconi right on his tail again.

Cicconi throwing every trick from a long playbook, took the advantage on lap 71 but Benson played the trump card and was back in front on lap 72. Johnny was able to put a couple car roadblock on Cicconi but Lou jumped it and was back on Benson’s tail at the 20 to go mark, not leaving out Wood, Summers, McKennedy and Perley by any means.

With 8 laps to go the excitement escalated if that was possible as Benson hit another traffic wall, allowing Cicconi to catch right up again. With five to go, Benson had cleared a path through and one lap later Wood get by Cicconi in the cat and mouse chase leaving Summers, Cicconi, McKennedy and Perley not far behind.

With three laps to go, Cicconi suddenly appeared to slide up the track losing a couple valuable spots to Summers and McKennedy. After finishing sixth, Cicconi said on those last laps, “I was running with Benson. I thought I was going to get a shot in lap traffic. Actually, I did get by him but I didn’t take his line away and I should have. He runs me so clean. Then we were going through that heavy lap traffic and Jonathan McKennedy made a right turn into me, hit me and almost spun me out. I was able to hold on though.”

Benson came through the last two laps unscathed with Wood and Summers chasing for the top three spots. McKennedy and Perley finished up the top five.

McKennedy commented later, “We had a good car. I want to thank Paul and Helen Dunigan for letting me run the car again. At the beginning of the race, the car was a little bit tight – it might have been all the fuel. Chris and I had a pretty good race back and forth there. It was fun racing with him. … good clean racing. We were able to catch up to Russell and Robbie but at that point the race was over. Congratulations to Johnny on his second win in a row here.”

Perley, who watched as his second Vic Miller ride for years, left the stable for the Cicconi garage, said of his run, it was round and round for 100 laps. Let’s see here. At Star we finished second and we were wondering what was wrong with the car. It was good but it was a good second place car. We came here and the car was good all day but it wasn’t quite what we’re used to I guess you could say. We worked on it and I think we did the best we could. I was really happy with a fifth after starting fourteenth, but now we think we know what it is. So, we’re going to go home and cut it up. But I’m happy. The car ran the whole 100 laps. It was a tough race and it was fun racing with everybody. Everybody raced clean. Traffic was tough which made it fun. Fifth is good. We’ll take it.”

Notes…ISMA’s $2500 donation to Racing Against Cancer came from a share of their purse for the night’s feature… Rick Wentworth, driver/owner of car 10 gave all of his earnings for the night to Racing Against Cancer…Russ Wood gave his second place trophy to a young man, Austin Hayes, who was a young cancer survivor fan…ISMA’s season finale comes at Thompson Speedway on Oct 14-16…