CHRIS PERLEY ROLLS ON TO ANOTHER MANSFIELD ISMA WIN 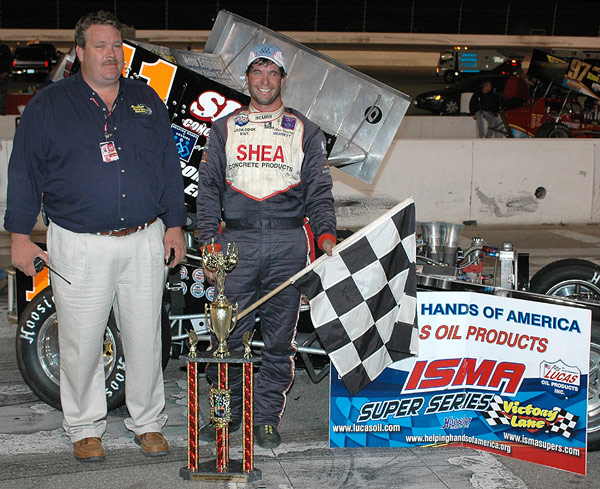 Mansfield, OH – Chris Perley said in August that he’d just won his first race in Ohio when he claimed the Friday night Mansfield ISMA 40-lapper. Saturday, Oct. 1 the “Rowley Rocket” picked up where he left off in August to claim the formerly postponed century grind. It wasn’t an easy win for Perley, however, as Pat Abold pressured him from behind on every lap for more than half the race. With Abold just 16 points ahead of Perley in the ISMA Lucas Oil-Helping Hands of America points, it was a battle for more than a win. Lap cars were strewn throughout the running order as the leaders passed by all but the fourth place car. To add to the exciting duel, Perley’s 11 began sparking in the last twenty indicating a possible problem. After dominating the Star Classic field in early September, Perley discussed his latest long distance sweep.

“Now we’ve won in Ohio twice. The car was great. We used the same set up as the last time we were here. Pat pressured me at the end. I didn’t think I’d be able to hold on. The sparking was just me stomping the throttle so bad going in…just driving my guts out. The car was getting real tight. At the beginning of the race I thought the car was real good. I thought we’d get loose. But we ended up getting tight. And I couldn’t turn it. Pat was all over me down in turns one and two and I could hear him every lap and I’m going ‘ah come ‘on’. But the lap traffic I was happy with because I able to get some advantage on him.

“I’d like to thank all my crew, car owner Vic Miller and all my sponsors – Shea Concrete Products, Perley’s Marina, R&R Engines, New England Motor Racing Supply, Barrett Transportation, Hardy Transportation and Jack Cook Enterprises for giving another good car to get me to victory lane.”

The victory closed the gap in the points to just 11 between Abold and Perley heading into the ISMA finale at Thompson (CT) on Oct. 16. Pat Abold tried everything he could to get Perley to no avail, but he knew sticking to his bumper was almost as good.

Said Pat, “It was a great race. It was a lot of fun. Lap traffic was a little difficult tonight. They weren’t staying down and giving us a lane on the outside like they were supposed to. Right at the end of the race there, lap cars really slowed me. I think I had a shot at him. I really do. I was starting to set him up. We didn’t need to catch the lap cars. But, it is what it is. It’s a second place and I’m still leading the points. We have one race to go. Another good solid run like tonight and we’ll get this thing.”

Running a distant third was Nokie Fornoro who still was smarting from a Star Classic scoring decision that took away a podium finish. “I’m kind of elated with third. Obviously we’d like to win, but from 16th to third is a pretty good run. I didn’t need that last red flag for fuel. I wish we’d kept going. I would have just made it on fuel. We added fifteen gallons and it tightened me up too much. I’m happy with a third place finish. I’m still disappointed with Star, but we’re young. We’ll get over it.”

A strong field of 31 supers made the trek to Mansfield’s Cavalcade of Racing and a huge crowd of over 10,000 came to enjoy the magnificent weather and the racing. Charlie Schultz and Joe Grunda led the 26-caar field in what would be an attrition-filled event. With Grunda out front, yellow slowed the field almost immediately when Larry Lehnert spun in turn two.

Grunda could only complete a lap or two when red fell for a hard hit by Joe Gosek in the May Motorsports 7. Joe reported later while looking over the badly damaged car that Russ Wood, running in the top ten, had slowed dramatically with a broken rear end causing a ripple through the pack. Gosek brushed with Mark Sammut as the cars bunched up, sending Joe into the first turn wall. Wood went pitside as the flatbed picked up Gosek’s ride.

Back underway Grunda left Charlie Schultz in the other May Motorsports machine in his wake while powering his way up though was Perley who moved by Jon McKennedy, Mike Ordway, Joe Petro, Jim Shirey, Dave McKnight and Abold to claim third by lap 20.

Schultz became the new leader on lap 23 with Perley and Abold right behind as Grunda fell back to fourth several car lengths ahead of McKennedy. A battled ensued behind Jon between teammates Mike Lichty and Dave McKnight who were just ahead of Mike Ordway, Moe Lilje, Jim Shirey, Nokie Fornoro, Belfiore and Petro.

On lap 24 Perley cruised by Schultz and set sail once again. A small bunch of lap cars stood between Chris and Schultz and Abold and he used the advantage to rail the track. Jon Henes, Jack Smith, Larry Lehnert, Randy Burch and Lou Cicconi fell off the pace and pitted as Perley fled the scene.

Lap 39 saw another bone-jarring crash as Joe Petro crashed on the backstretch. Joe’s beautiful 33 was a mess when it was dropped off the flat bed. Joe indicated that the rear axle was the culprit. “It just broke in half. It was a clean break, too,” Joe said incredulously as the crew was trying to put the pieces back together after the race.

Charlie Schulz was next to fade off the pace after the race restarted, but the yellow had closed the gap between Abold and Perley and the two went at it. Jon McKennedy was a distant third with Lichty, Ordway, McKnight, Fornoro, Belfiore and Kyle Carpenter still racing fast and furious in a group off the 79’s bumper.

Perley and Abold were deciminating the field and Perley’s 11 picked off Ordway on lap 61 as the top ten began to fall. Ordway was the next victim of attrition as the 61 slowed and went pitside on lap 63, putting Perley right behind Belfiore. He put Justin away and then Carpenter and McKnight.

Third place runner and rookie Jon McKennedy lost his fight for third when his car slowed and brought out the yellow incurring the same problem as teammate Wood on lap 68. McKnight used the slowdown to make a pitstop and came back out in the tail, as did Joe Grunda.

There were five cars left on the lead lap when another red flag flew, this time for the fifth place Justin Belfiore. Justin’s 8 suffered a hard hit into the second turn wall when Jim Shirey’s V-2 broke. Jim tried to collect the car and overcorrected, collecting Belfiore instead. Refueling was allowed while the 8 was picked up. Carpenter pulled the 9 in for an adjustment on this stop and Schultz tried to reenter the race but failed as he circled once and repitted.

It was back to the Perley-Abold show for the remainder of the race with Perley’s car starting to spark in the turns causing all kinds of speculation as to whether he could hold off Abold. A slight brush with the 9 of Carpenter on a lapping mission also caused a stir in the crowd on lap 94, but Perley began to lengthen his lead while Pat got caught by a couple lap cars. At the finish it was Perley and Abold well out front of Nokie Fornoro, Mike Lichty and Moe Lilje. Unfortunately Lichty’s 84 was weighed and re-weighed but fell short of the minimum weight requirements and he had to be disqualified out of a strong run. He moved to the back of the field in the finish leaving Lilje with fourth and Dave Trytek in fifth, his best ISMA finish ever.

Lilje said after his race in the Stout 19, “I had a pretty good race car. I had to hustle a little bit to stay on the lead lap. Then Chris got by me there at the end and that’s about all she wrote. The car was really there at the end, but we were already behind the eight ball. We couldn’t make up for it. I think we would have had a top three car had I stayed on the lead lap but we came home with a top five and came home in one piece. We’re happy.”