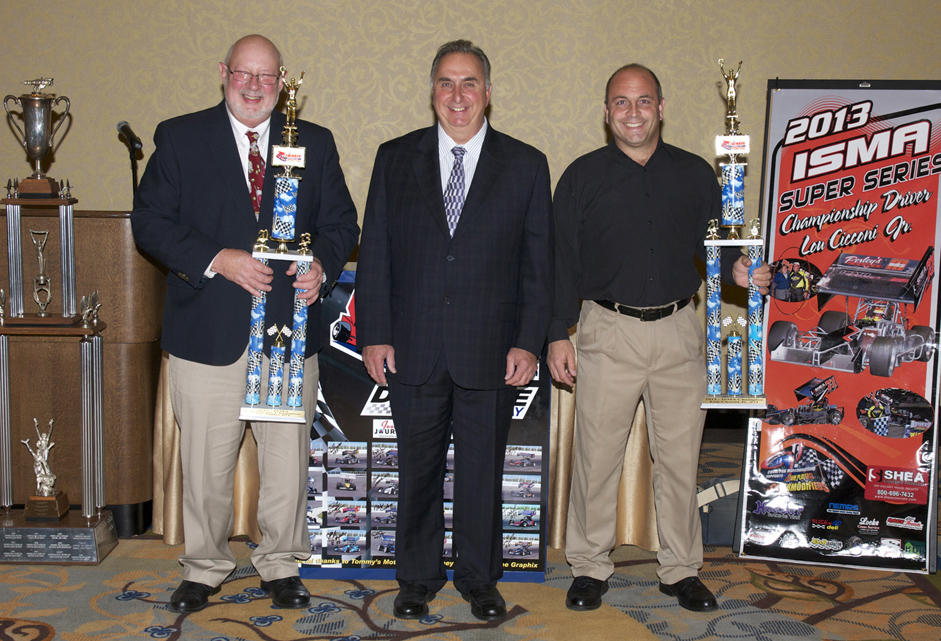 The 2013 Car Owner and Driver awards went to Vic Miller, his eighth title overall and Lou Cicconi who finished atop the ISMA point standings at season-end making it a career first for the Aston, PA veteran. The tradition of carrying the huge championship trophy home until the next season ended here with a new tradition of separate trophies to be given to the car owner and driver individually. The five-foot plus trophy that has all previous champions engraved on it, will find a permanent home, possibly at the Watkins Glen Motorsports Museum.  Brad and Mike Lichty were also belatedly each given individual trophies for their 2012 titles.

The remainder of the top fifteen owners and drivers received plaques and checks with the individual awards announced next as voted on by the membership.

The Locke Crane Services Mechanic of the Year honors when to Ryan Klingelhofer of the Lichty-Reed team. He was awarded a jacket and $1000 for his efforts.

The Randy Witkum Memorial Rookie of the Year award sponsored by Shea Concrete went to Alison Cumens for her sixth place finish in the standings. Cumens also received the Slice n Go Deli Most Improved Driver award and the ISMA Achievement award to top off a great evening for the Lydell, PA driver of the family-owned 39.

The ISMA Support Award went to Carol D Haynes, for her longtime service to ISMA as a PR person and more. Haynes, who announced her retirement from her ISMA duties earlier this year, was given a plaque along with a beautiful necklace.

The Race Threads Crew of the Year honors was presented to the huge Lichty-Reed race team, which fielded as many as four supermodifieds in competition during the season.

Several drawing from the names of the drivers and owners on hand at the banquet were held. Howie Lane won the BS&B Radiator donated by that London, Ontario shop. Jeff Locke won the Seymour Enterprises helmet and Vic Miller won the beautiful toolbox that had been put together by Delaware Speedway as a raffle item for charity. The toolbox, despite many attempts to find the winner, never was claimed so it was deemed that it be given away by the luck of the draw to some lucky owner or driver.

The banquet, as is tradition, ends with the annual Memorial awards. Delores Murphy was once again honored with the Lois Matczak Memorial award while her husband Jack Murphy was presented, posthumously, with the Jim Soule Dedication award. The Jim Shampine Memorial Award went to longtime sponsor and supporter Ed Shea who in 2013 initiated a separate Shea Concrete ISMA Super Series Steel Palace point fund at the Oswego Speedway, which was shared by the top five point getters Chris Perley, Lou Cicconi, Mike Lichty, Ben Seitz and Mark Sammut.

A poignant final ceremony ended the banquet with the entire contingent of ISMA Board of Directors and officers presenting Delores Murphy with a very special Shamrock 6 necklace in honor of her late husband Jack who had served ISMA as president, board member and head tech man for many years before his passing just prior to the May 4 ISMA opener at Oswego.

Earlier Board and General meetings addressed a few rule changes for 2014 and a tentative 14-race schedule presented. A tentative opening date of May 3 will once again see the ISMA supers at Oswego for one of four events slated for the Port City oval.  A tentative return to Oxford Plains Speedway coupled with an Autodrome Chaudiere race the following day is penciled in for June 20-21. Confirmed at this time are July 12 Oswego Speedway with July 25-26 the site of the Sandusky Hy-Miler weekend.  August finds shows at Lee and Waterford on the 8th and 9th with August 15-16th trips to Delaware and Sunset Speedways. August closes out with the Oswego Speedway SuperNationals on the 30th.

Star Speedway’s annual Classic is Sept. 6 and the season closer is at the Thompson Speedway World series Oct 17-19.

This schedule is tentative and there may be additions or changes before being finalized.