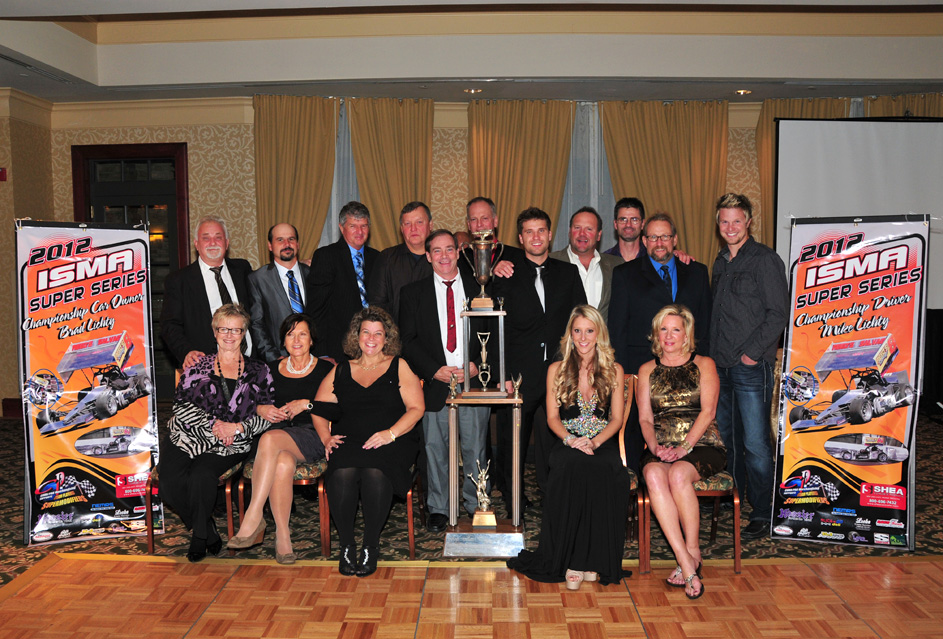 Verona, NY – The International Supermodified team gathered at the Turning Stone Casino on Saturday, Nov. 3 to once again honor its new champions and recognize the other achievers for 2012. And, for the second time in the group’s history, the giant ISMA championship trophy will be hauled back to Canada by the Lichty Team of Innerkip, Ontario. Brad Lichty and Dave McKnight became the first back in 2001.

Brad Lichty was presented the Dunigan Owner of the Year jacket, while his son Mike received the Driver of the Year jacket. It was a first-time championship for Mike Lichty who was also voted the ISMA Achievement award for his great championship battle during the very competitive season, which saw 10 different feature winners, with Timmy Jedrzejek, Lou Cicconi and Lichty teammate Johnny Benson. Lichty claimed the title by a 32-point margin over Cicconi after the Thompson World Series finale.

Both Lichtys spoke briefly thanking their crew and family for the hard work and dedication put in on their first place run by Mike and their teammate Johnny Benson Jr. who raced the Lichty 74 to a third place finish in points. Another adopted teammate during 2012, Ryan Coniam, also won a feature to boost the team’s achievements.

The Slice n Go Deli (Fulton, NY) Mechanic of the Year award went to Dan Soule whose 32, driven by Timmy Jedrzejek chased Lichty to the very end, unfortunately incurring a bad crash in practice at the last race. The Soule team also picked up the Race Threads (OH) Crew of the Year award and was presented a certificate for a nose wing by New England Motor Racing Supply.

The Randy Witkum Memorial Rookie of the Year award, sponsored by Shea Concrete, went to Tim Ice. Although he is a 30-plus year race veteran, it was only his first full year of ISMA supermodified competition. Ice drove the Yevette Meihls-owned 65 super to an eighth place in ISMA points as a teammate to Lou Cicconi Jr. who was honored with the ISMA Support award. Cicconi ran to the runner-up spot in the final ISMA point tally.

Eddie Witkum was voted the Most Improved Driver award after his fine fifth place finish in points in the Howie Lane 97.

The Gater Racing News Fans Choice Most Popular Driver plaque, check and subscription went to Canadian Mark Sammut who was a seventh place finisher in the ISMA points as well.

The Lois Matczak Memorial Award went to Kathy Harrington for her hard work on the Driver Point fund.

Two of ISMA’s most coveted awards – the Jim Soule and Jim Shampine Memorial awards went to Mark Sammut and the late Mike Woodworth. Mike’s brother Butch Valley Jr., accepted the award for Woodworth, a crewman for the Vic Miller team who passed away unexpectedly in August.

MC Anne Schaefer then closed out the award ceremony, which was followed by music and entertainment in the resplendent Shenendoah Clubhouse setting.

A sixteen-race tentative 2013 ISMA schedule was discussed earlier in the day at the general membership meeting. The schedule, which begins on April 27 at Seekonk Speedway, also includes a 4-race ISMA series at Oswego Speedway (May 4, June 8, July 13 King of Wings, Aug. 31, Super Nationals). A return to Autodrome Chaudiere in Quebec is slated for June 21 & 22. Also on the slate are traditional visits to Sandusky’s Hy-Miler weekend (July 26 & 27), Lee USA Speedway (Aug. 9), Waterford Speedbowl (May 25 & Aug. 10), Star Speedway Classic (Sept. 7),), and Thompson’s World Series of Speedway Racing (Oct. 12-13).  A Delaware Speedway doubleheader date is still under discussion and will be announced as soon it is finalized.