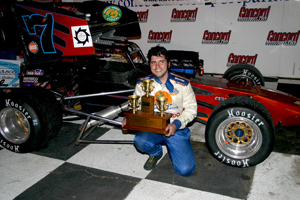 Concord, NC – Competitors from the International SuperModified Assocation (ISMA), the Midwest Supermodified Association (MSA) the Englewood Racing Assocation (ERA) and the Western States Supermodified Racing League (WSSRL) were invited to converge on a neutral site at ConcordMotorsportsPark in NC to battle for bragging rights. The race was billed as the first annual East-West Shootout for supermodifieds and the racing certainly lived up to the title. Thirty-eight of the best of the best supermodifieds gunned it out for two days and when the smoke finally cleared AJ Russell of Clovis, CA put the notch in the win column for the West Coast contingent. Finishing second was the dominator of the east, Chris Perley with Charlie Schultz, MSA star, picking up third. The promoters couldn’t have asked for a better ending! The win was worth $3,800 plus lap money and was a career fourth for the 24-year old driver who lists his occupation as Indy Pro series driver.

Russell, a three-year super vet, put his father-owned small block super into the lead on lap 26 of the Wirtgen 50, after grabbing the point from Mooresville, NC driver Doug Didero. Russell was dogged to the end by 12-race winner in 2007 Chris Perley, but Perley just couldn’t get by.

After hauling to a Berlin Raceway ISMA show in September, Russell got an inkling of who he’d have to beat at Concord. “You don’t come to an east coast race against these guys and expect to win but you always have to come with the attitude that you can win it,” said the California driver in victory lane. “Everybody said Perley can’t be beat but guess what, he just got beat. I’ve dreamed about a gathering of west and east coast drivers coming together to duke it out just like this. It turns out we were fairly even the way we finished 1-2-3. You couldn’t have asked for anything else.”

AJ described his Concord experience this way. “All weekend long it looked like we weren’t all that quick at times. But I knew the only place if we were going to dominate this place is out of turn four. So we made sure we had a good car out of turn four. It paid off. With five laps to go I started running out of fuel. I was saying to myself, ‘I’m going to run out of fuel while leading this thing.’ But it didn’t happen.”

Facing a 43-hour trip back home, AJ laughed and said, “It’s going to be a real nice ride back home. I’d like to thank a couple people. Rick Cameron for letting me borrow this motor. We blew one about a week before we left. And Ken Coventry for building it. He builds one powerful bullet.”

The Rowley Rocket, Chris Perley set fast time, not unexpectedly, but finished one spot out of the handicap spot in the heats to start 15th in the field of 34. By lap 34 he was up to second after battling through a tough, tough mix of supers. But by then Russell owned the triangular half-mile as the record crowd on hand could see. Russell’s line was magnificent. And Perley acknowledged the fact in victory lane.

“We came here to race and we raced. AJ did a good job. We tried to make it close but he would just jackrabbit away. I couldn’t catch him. You would think that motor wise – a 410 versus a 468 – that we’d out-horsepower him but we were pretty even. It was a good race and it was fun to be here. It’s a great track. I’m glad all the fans came out. Sorry we took a little too long but I hope we put on a good show.”

Chargin’ Charlie Schultz completed the three-organization triumvirate over the line. He was ecstatic to represent the MSA portion of the contingent as he described his Concord experience.

“We’ve never seen this place before and we struggled a little bit in the first practice session. We got some pointers from some of the guys who had run here before. We worked on the car and got it real good for qualifying. We ran real well in the heat race. We knew we had a raceable car. We didn’t change a whole lot for the feature. The car was really good up until about lap 30 and then it started getting loose. The motor began overheating. I started thinking ‘what else can go wrong?’ A flat tire? Getting taken out by a lap car? But it turned out to be a heck of a race. I think this says a lot for the supermodified competition from all over the United States and Canada. To have one of each of the different series finishing in the top three.”

“I love this track,” the Lorain, Ohio driver continued. “I love tracks that really challenge you and make you think about to race them and how to race people on the race track itself. I hope we can come back next year. I’d like to thank Dave and Lori May and the entire May Motorsports crew. Randy Myers, R and P Chassis, PRP Shocks, Fisher Performance, AC Delco, Performance Race Fuel, Outlaw Brakes – just the whole package – it’s working great.”

After qualifying, with some mishaps along the way, 34 supers came to the inaugural Wirtgen East-West supermodified green with Rich Reid and Scott Martel leading the way. It was Martel taking the first lead but yellow flew immediately as a large group jumbled a bit on the green sending the 27 of Californian Martin McKeefery into the wall.

With things beginning to sort out, Reid pulled away from Doug Didero, Brad Noffsinger, Shultz, Timmy Jedrzejek and Martel as green prevailed. On lap 15, the 40 of 62-year old Colorado driver Harry Stone met with the wall, bunching the field.

It was Reid, Didero, Schultz, Noffsinger and now Russell on the restart with Timmy J’s motor fading on the 80 sending him out of the top mix.

Lap 20 saw Didero pass by Reid at the line for the lead with Schultz taking second shortly thereafter. Behind Reid and Schultz was Chris Perley, methodically working his way forward.

Russell had Schultz and Perley in tow as Reid, Mike Ordway Jr., Noffsinger and Mike Lichty trailed the top trio.

Things slowed again on lap 34 when Joe Gosek’s 00 quit in turn one. On this restart, Perley jumped Schultz for second and he headed for Russell.

Another west coast car bit the dust and the wall on lap 36 when Jim Birges 32 brought out the flag.

The race went green the rest of the way with Perley trying every thing to get by Russell but falling short. At the checkered it was Russell, Perley, Schultz, Dale Lamborn and Mike Lichty in the top five but Lamborn was moved to sixth in the scoring for jumping the green on the previous caution, giving fifth to Rich Reid.

ISMA’s Lichty, whose teammate Dave McKnight had lost a motor after time trialing fifth fastest and qualifying third in his heat, commented on his finish. “ I didn’t have much practice after losing a motor on my car. We qualified horribly. I think we were 22nd. We ran poorly in the heat race but we got in the show. We started the race 12th and we were loose from the get-go. The last ten laps or so the car tightened up and we were actually pretty decent. To come out of here with a fourth, we’ll definitely take it. I want to thank everybody who put this program together: C n C Promotions, Wirtgen and everyone. I love this place. It’s my first time here and it’s a great racetrack. Hopefully we’ll have more shows to run here.”

Reid, another MSA driver, was more than pleased with his fifth. “A top five finish at Concord! Wow, what can I say? The car was great for the first fifteen or so laps which we led. Then the caution came there and we started to pick up a push. By the end of the race we were crossed up off four. I had a whole lot of wheel into it. I was very pleased with what the guys on the crew did and I’m pleased with the finish. I can’t complain. The crew busted their butts. We weren’t very good when we got here but we were pretty decent when we left.”

Lamborn, Ordway Jr., Mark Sammut, Martell and Noffsinger then completed the top ten in that order. Joey Payne Jr., driving the Morton 46, was also caught following Lamborn on a hasty green and he too was penalized back to 11th, the tail of the lead lap.

Coppo and Miller added to field by promoter